The Sir Chandler blog noted that all three remaining ex-Norwegian Air Argentina 737-800's, LV-HQH, LV-IQZ, an LV-ITK, were parked remotely at Buenos Aires Ezeiza (EZE) on 08Dec20, apparently in disuse by Jetsmart Argentina and presumably to return to the parent Norwegian Air in Europe at some point.

This blog posting covers developments at Norwegian Air Argentina between May 2018 and its acquisition by Jetsmart Argentina in December 2019.  For information on NAA prior to May 2018, please see the postings in this blog for the carrier prior to that date.

NAA announced its first six routes and started selling tickets for them on 04Sep18.  The carrier had indicated at one point that it would fly out of all three Buenos Aires airports - Aeroparque (AEP), El Palomar (EPA) and Ezeiza (EZE) - but in the end it started flying only out of Aeroparque (AEP) and it never added service from another of the capital's airfields.  Cordoba (COR) and Mendoza (MDZ) were slated for the inaugural flights on 16Oct18.

All of the routes started on the dates and with the frequencies as announced above.

By early 2019, the carrier was operating 14 daily departures out of Buenos Aires Aeroparque (AEP) to Cordoba (5), Mendoza (4), Puerto Iguazu (2) and one each to Neuquen (NQN), Bariloche (BRC) and Salta (SLA). 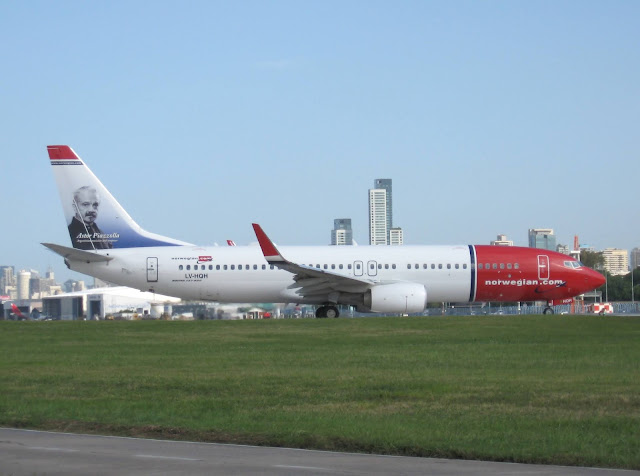 NAA started operations with only one aircraft; 737-800, LV-HQH  (c/n 42278/6347), which was delivered to the airline on 15Jan18, being transferred from Norwegian Air International.  This aircraft sported the image of famous Argentine tango composer Astor Piazzolla on its tail.  LV-HQH returned to Europe for the northern hemisphere summer to help bolster capacity at Norwegian during the peak season there but it returned to Argentina on 06Oct18, only ten days before NAA's inaugural flights from Buenos Aires Aeroparque (AEP) to Cordoba (COR) and Mendoza (MDZ).

With four more cities added to the route network in the first three months of service, NAA needed more lift, which it got from the addition of three more 737-800's to the fleet, all transferred from Norwegian Air International, as detailed below.  All four of the aircraft were equipped with 189 economy class seats with no premium class cabins. 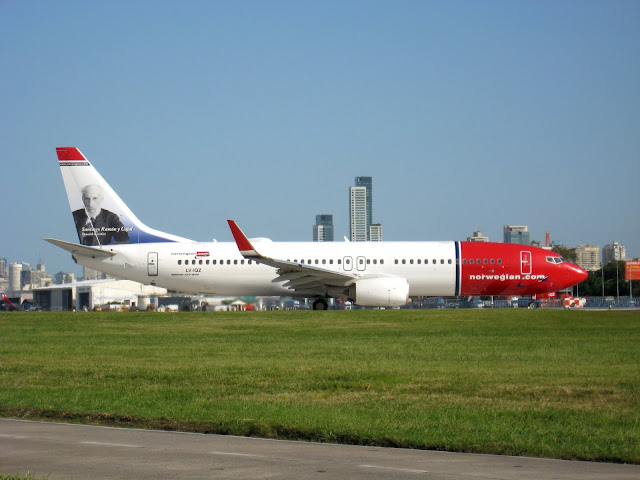 737-800, LV-IQZ (c/n 42086/6365), was delivered to NAA on 09Nov18 carrying the image of Spanish neuroscientist Santiago Ramón y Cajal on the tail.  Though it was expected that a famous Argentine would replace Ramon y Cajal, the Spaniard remained on the tail of LV-IQZ for its entire time with NAA. 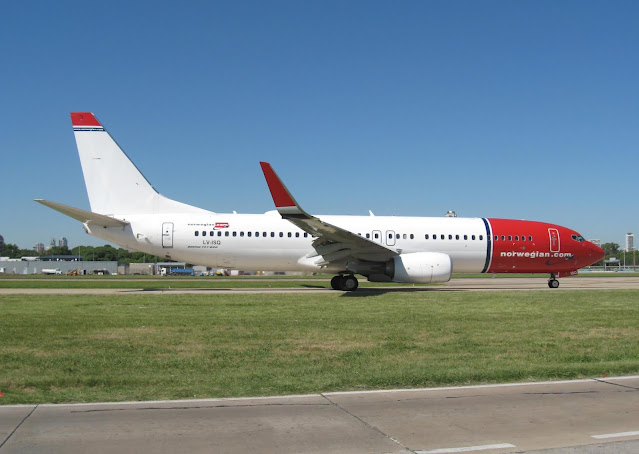 737-800, LV-ISQ (c/n 42280/6402), was delivered to NAA on 02Dec18 with an all-white tail.  The aircraft previously carried the image of English footballer Bobby Moore but given the intense international football / soccer rivalry, it was decided that it would be better to not have this image flying on an Argentine airline, especially given the experience between the two countries in the 1982 South Atlantic War and 1986 World Cup. 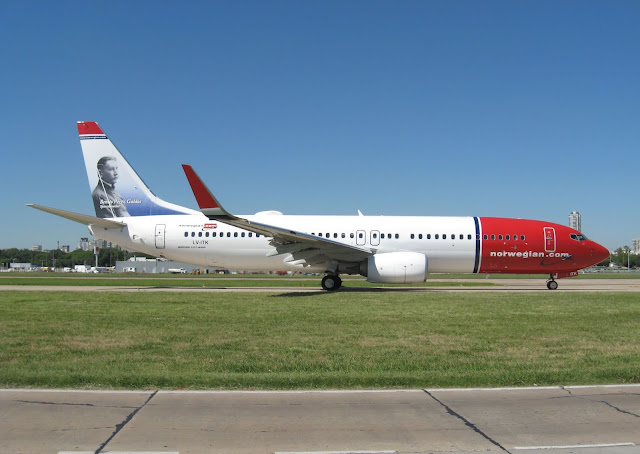 It was not known at the time but the four aircraft above would be the only ones to operate with Norwegian Air Argentina, far short of the 10-15 planes that were expected to be in service with the carrier by the end of 2019 and up to 70 total airframes by 2024-27.

It was originally thought that all of the aircraft would have famous Argentines painted on their tails (with the condition that no living figures or political / controversial personalities would be considered).  The most likely individuals to feature on NAA tails were thought to be Rene Favoloro, the pioneering cardiologist of international renown and Juan Manuel Fangio, multiple Formula 1 champion race car driver.

The carrier's domestic flights had three fare classes, as follows:

* USD 70 change fee plus any difference in fare

* USD 70 change fee plus any difference in fare

An example of a typical LowFare on the inaugural flight from Buenos Aires Aeroparque (AEP) to Cordoba (COR) round-trip was ARS 998 / USD 40.  Average fares were said to be about USD 100-150 round-trip.

NAA's fleet took a reduction on 27Apr19 when LV-ISQ returned to Norwegian Air International, resuming its Irish registration of EI-FVT, to add more lift to the parent carrier's fleet for the European summer, especially in light of the grounding of NIA's 18 737 MAX 8 aircraft.

The reduction of its fleet by 25% from four to three aircraft forced NAA to reduce its flight schedule.  The number of daily flights out of Buenos Aires Aeroparque (AEP) to Cordoba (COR) went from five to three, to Mendoza (MDZ) from four to three, but with Puerto Iguazu (IGR), Salta (SLA) and Neuquen (NQN) all maintaining  their one daily round-trip.  Bariloche (BRC) is a year-round outdoor recreational area, featuring a ski resort in winter, so the number of flights going there actually increased for the June to September period.

LV-ISQ was expected to return to NAA in September 2019 along with the addition of another 737-800 to help build the carrier's fleet but the Argentine economy was worsening and NAA never grew to have more than a three-aircraft fleet again.

Beginning of the End

In May 2019, the financial director of Norwegian Air, Geir Kalsen, speaking at a press conference in Oslo, Norway, was asked about rumors that the airline was not doing well financially to which he replied that the outlook for June and July was not favorable and if NAA did not show signs of a turnaround by August, it would be shut down.

Another alarming sign was that reservations could not be made on the NAA website for flights beyond September.

The delicate situation prompted Norwegian's director general Bjorn Kos to state that Norwegian was committed to Norwegian Air Argentina.  This was followed by a press release indicating that NAA would double the destinations that it flew to by September, with one of the new ones to be Ushuaia (USH).  Tickets for the new destinations were to go on sale shortly.  These new flights would be made possible by the return of LV-ISQ to Argentina and the addition of several more aircraft by the end of the year.  Furthermore, given the projections at the time, the carrier expected to be profitable by August.

NAA proceeded to announce in June that it would add flights from Buenos Aires Aeroparque (AEP) to five new destinations in September - Comodoro Rivadavia (CRD), Trelew (REL), Puerto Madryn (PMY), Jujuy (JUJ) and Ushuaia (USH) - but only JUJ and USH were actually started, on 20Sep19 and 21Sep19, respectively.  The airline did not add aircraft to its fleet and continued to operate with only three 737-800's.

Norwegian Air Argentina's overall operating environment declined during the course of 2019 due to the following factors:

As 2019 wore on, the Argentine economy went into recession and the Argentine peso was devalued against the US Dollar for the second time in as many years, going from 20:1 pesos to the USD in early 2018 to approx. 60:1 by late 2019, making the carrier's USD-denominated expenses, such as fuel and aircraft leases, three times more expensive while the peso salaries of its predominantly Argentine customers went up far less quickly than that, making it impossible for NAA (and other Argentine carriers) to increase fares enough to cover rising costs.

Argentina had presidential elections in October 2019 with the incumbent, Mauricio Macri, whose administration had pursued the policy of "The Revolution of the Airplanes" opening Argentine skies to Low-Cost Carriers, losing to Alberto Fernandez who represented the political party that was in power between 2003 and 2015, which previously opposed a liberalized Argentine air transportation market and presumably would do so again.  This did not bode well for the future of Norwegian Air Argentina and the other Argentine LCC's .

Finally, NAA's parent carrier had assumed much debt in recent years with the company looking to improve its finances.

A sign that Norwegian Air Argentina's future was in serious doubt came in late November 2019 when it became apparent that the carrier was not selling tickets beyond 28Mar20 while Norwegian Air International's flights between Buenos Aires Ezeiza (EZE) and London-Gatwick (LGW) were available for sale through October 2020.

On 04Dec19, Jetsmart Argentina (JA) announced that it had agreed to buy Norwegian Air Argentina thus becoming part of the American-owned Indigo Partners airline group consisting of JA, Jetsmart Chile, Frontier Airlines of the US, Volaris of Mexico, and Wizz Air of Hungary.

* JA already had plans to add a fourth A320 to its fleet with a fifth to come in early 2020, allowing for increased coverage of the combined route network

Jetsmart Argentina apparently assumed that purchasing NAA would allow it to access the latter's highly-prized slots at Buenos Aires Aeroparque (AEP) but the ANAC Argentine aviation authority did not necessarily agree.  This was apparently thrown into further doubt because of the potential political repercussions of the ex-NAA employees reluctance to accept the labor agreements of Jetsmart Argentina's labor unions, which were less generous than they had worked under at NAA.  This disagreement was reportedly resolved in March 2020 but the issue of continuing to operate from Buenos Aires Aeroparque (AEP) appeared to still be unresolved when all regularly scheduled flying stopped in Argentina on 20Mar20 due to COVID-19.

Norwegian Air Argentina's exit from the Argentine air transportation market after only operating a maximum of four aircraft came as a big surprise in Argentina given Norwegian's initial ambitious plans for the country and its position as one of Europe's largest LCC's.

Many assumed that it would brush aside smaller competitors, such as Flybondi and Jetsmart Argentina but that never came to pass.