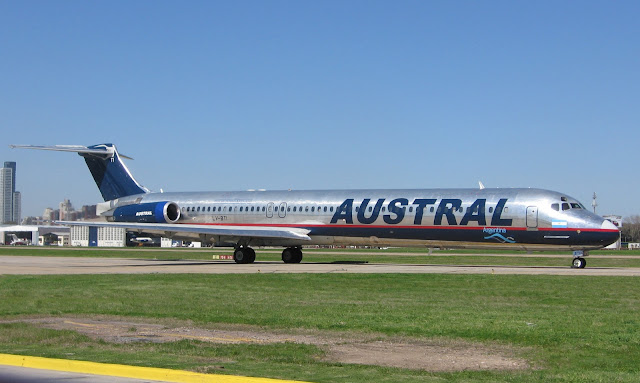 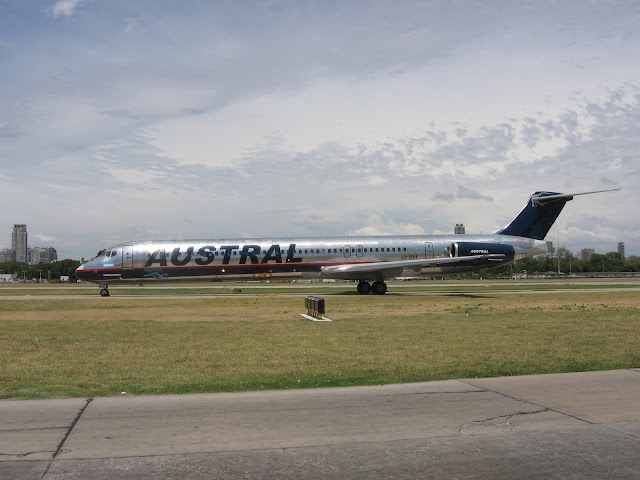 Additional info to the 20Jan12 posting below is that Austral's first scheduled international flight (referring to the recently resumed international routes) was Flight AU2902 on 30Nov11 from Buenos Aires - Aeroparque to Montevideo flown by ERJ-190, LV-CID.

The sudden death of former Argentine President Nestor Kirchner on October 27, 2010 brought many heads of state and dignitaries to Buenos Aires for his wake at the Casa Rosada Presidential Palace the following day.   With Aeroparque located only about seven kilometers from the palace most of the visitors flew into this airport with the most important officials continuing by helicopter to the Casa Rosada.

Some of the more interesting aircraft to visit AEP on October 28 and 29 were: 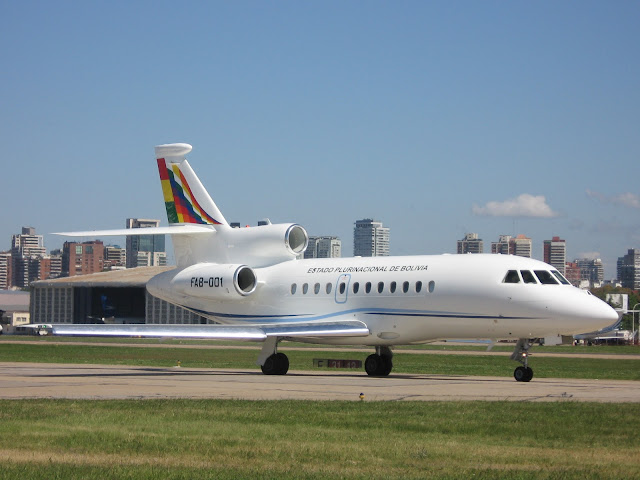 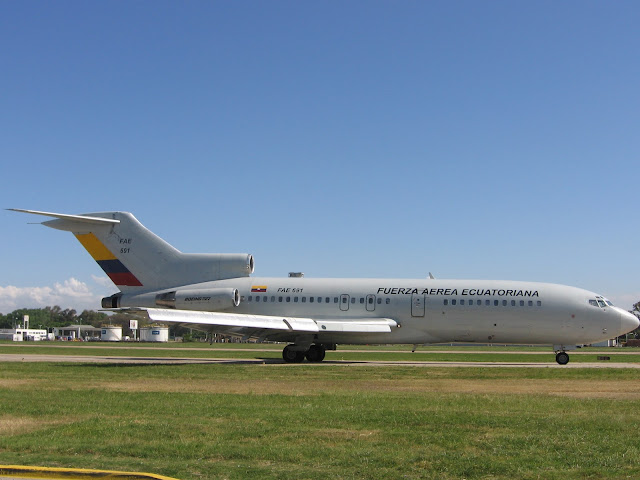 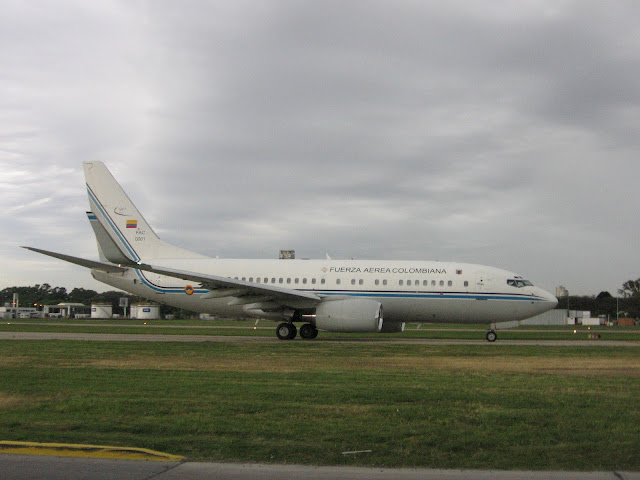 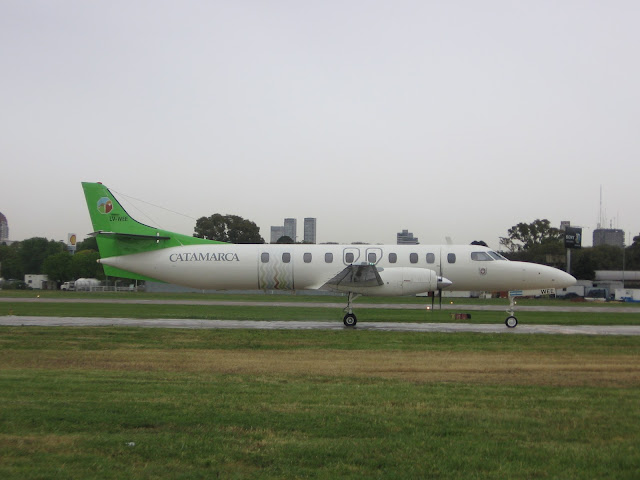 Austral recently started flying internationally again after many years.  The carrier flew YS-11's from AEP to Montevideo, Uruguay (MVD) at least during the 1970's.

The airline resumed international service with a flight from AEP to Punta del Este, Uruguay (PDP), a major South American summer resort, in late December 2011 with the flight operated by ERJ-190, LV-CEV.

A second new route was added from AEP to Santiago de Chile (SCL) on 17Jan12 with the first flight operated by ERJ-190, LV-CPJ.

Carlos Abella of http://aerospotter.blogspot.com/ reports that the AR 707-387B pictured in the blog posting dated January 14 never flew for the Fuerza Aerea Guatemalteca and is still hangared today at El Palomar AFB near Buenos Aires.  Its last flight was in 2004.  Thanks Carlos !
Posted by Phil BOS E-Mail: psp757@hotmail.com at 10:21 PM No comments:

ARJet 737-200, LV-ZYY, is reported to be operating charters out of AEP and EZE during the southern hemisphere summer.   The carrier has a small maintenance base at El Palomar Air Force Base just west of the city of Buenos Aires.

Leal Lineas Aereas started operations on 21Dec11 with a flight by its MD-83, LV-CSW, from AEP to Rio de Janeiro (GIG) on behalf of Flying America.

Photos of Austral MD-83, LV-BGZ, c/n 49906/1786 in a hangar at AEP in the process of being painted in the carrier's new colors appeared on the blog http://linea-ala.blogspot.com/ on 20Nov11 but another blog http://aerospotter.blogspot.com/ reported that as of 05Jan12 the aircraft has been indefinitely stored after a "C" Check due to lack of spares.

With Austral scheduled to retire all of its MD-80 fleet by April 1, LV-BGZ will likely be the only MD-80 painted in the airline's new colors and it is not even known if the repainting was completed.  That will certainly be a rare photo/slide !
Posted by Phil BOS E-Mail: psp757@hotmail.com at 9:40 PM No comments:

Photos of aircraft that brought South American leaders to Buenos Aires - Aeroparque on October 1, 2010 for an emergency meeting of the Union of South American Nations (UNASUR), which was then headed by ex-Argentine President Nestor Kirchner.  The meeting was prompted by a coup attempt against Ecuadorian President Rafael Correa the day before. 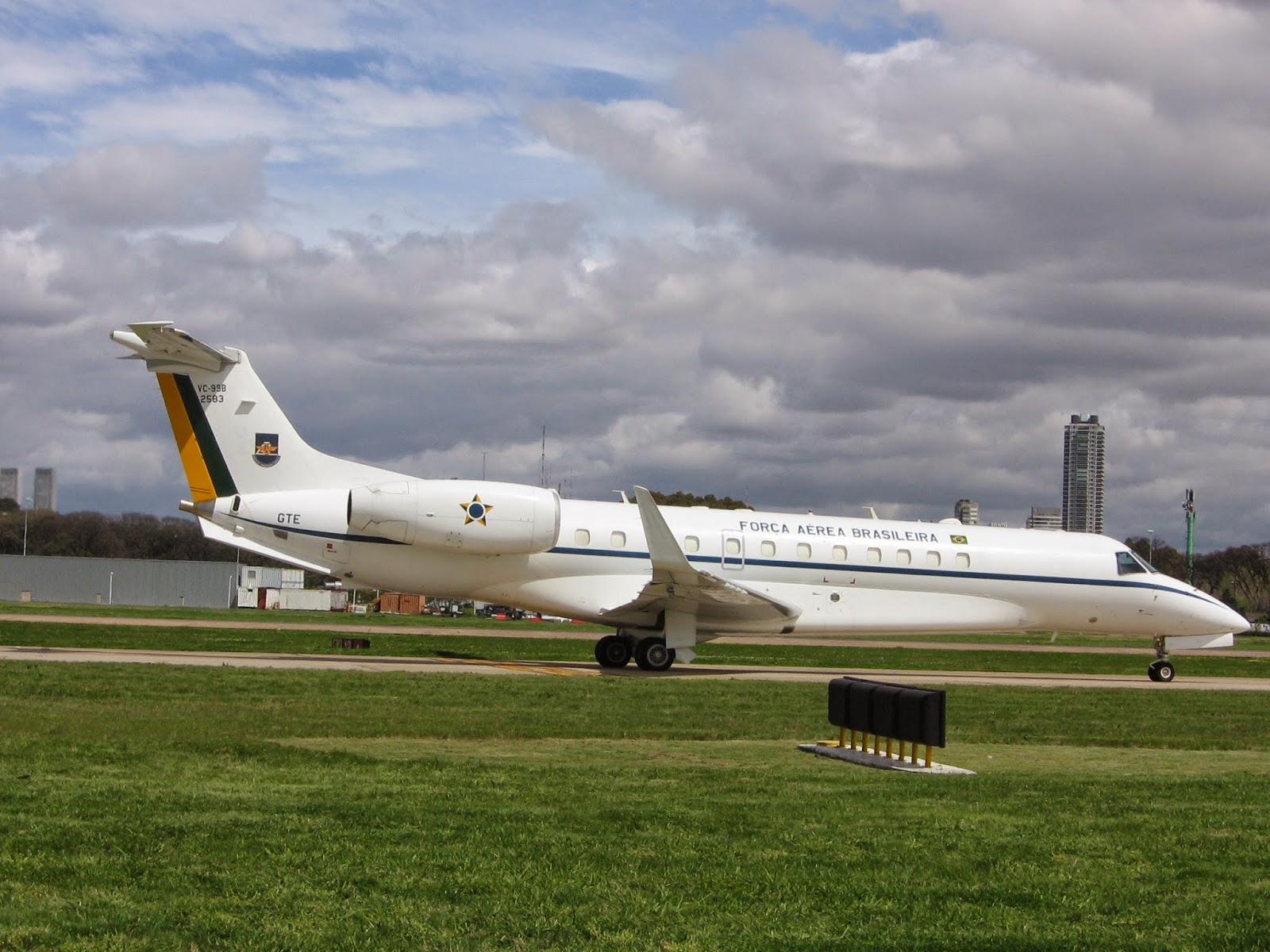 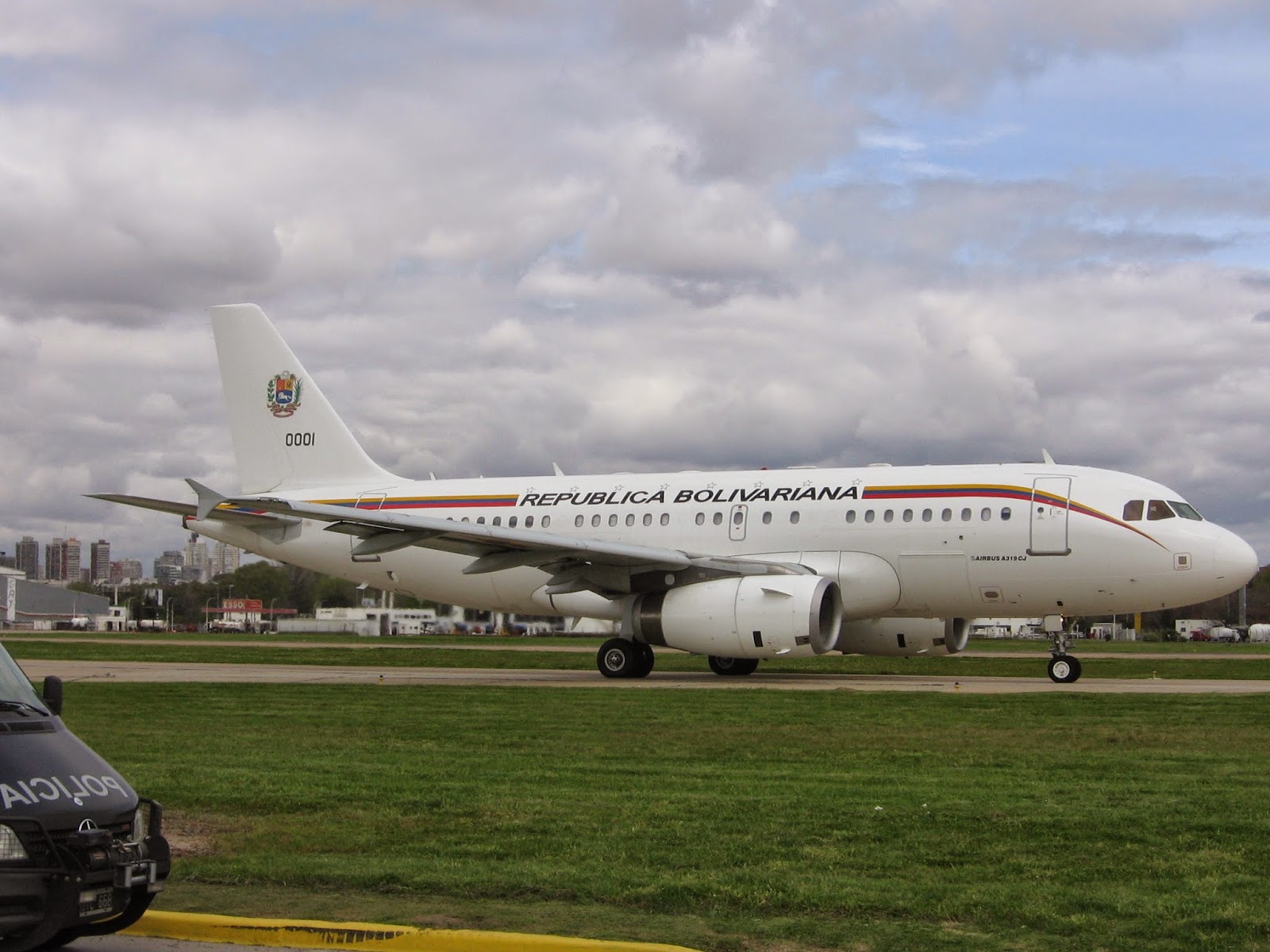 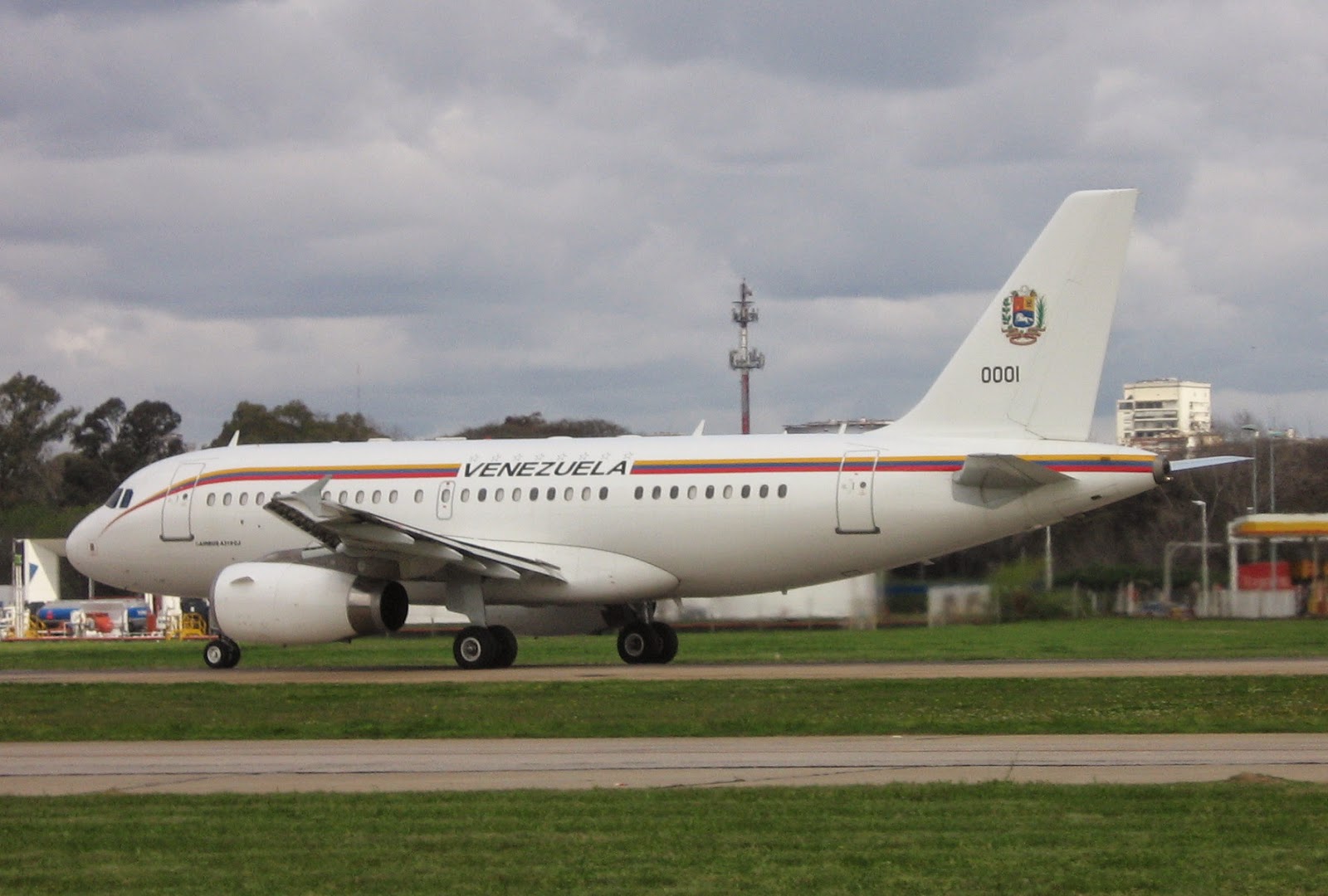 The other side of Chavez's A319CJ with "Venezuela" titles as it rumbles down AEP's runway 13 for takeoff. 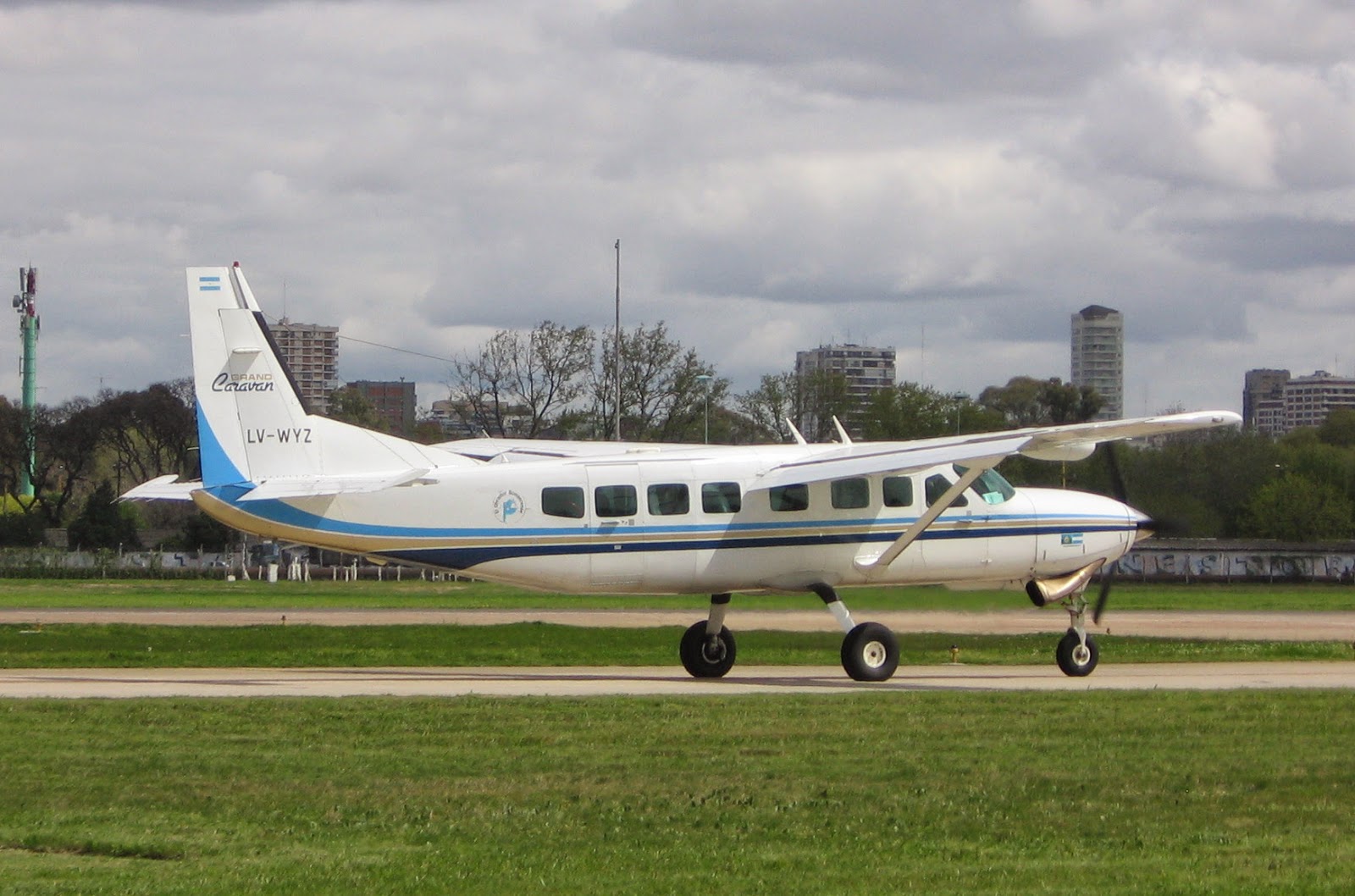 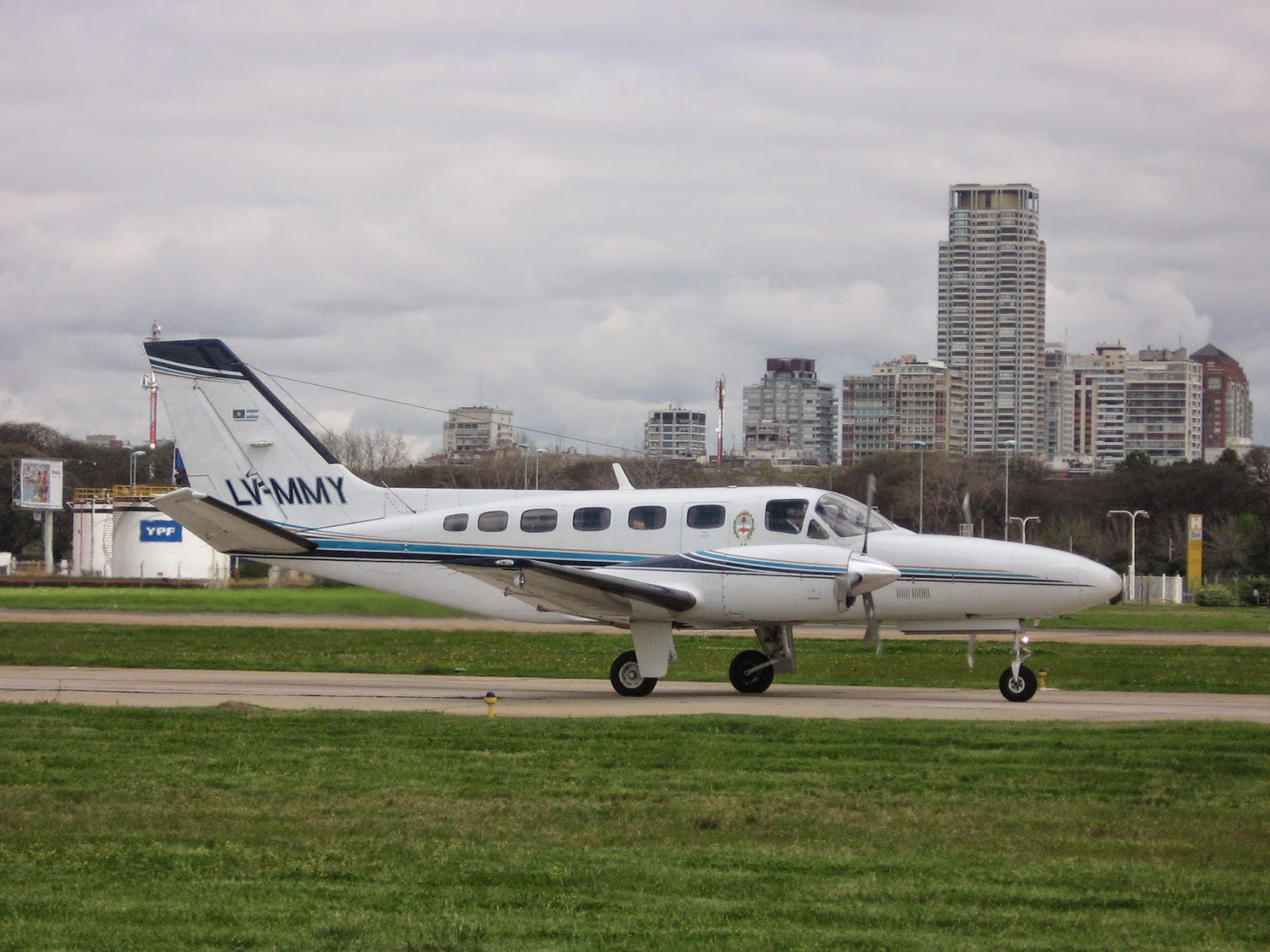 Airline flights resumed to Bariloche on January 13 after four months with no service  due to a combination of ashes in the atmosphere from the Puyehue Volcano in Chile and closure of the airport for maintenance work.   The first landing was by an Aerolineas Argentinas 737-500 operating flight AR1682 from Buenos Aires - Aeroparque.

Full schedules of commercial flights to BRC ceased on June 4, 2011 when the long-dormant volcano erupted with large amounts of ash blowing into the sky.  Since then, BRC only received five Aerolineas Argentinas flights for a short time in September and one or two other flights, such as by Andes Lineas Aereas, when the ash temporarily ceased.

Bariloche is an Argentine city located on the shores of Lake Nahuel Huapi in the internationally-famous Patagonia region, with a major ski resort nearby, Cerro Catedral. BRC receives many charter flights directly from Brazil in the winter season from June through September but the volcanic ash caused many of these to be cancelled or routed to Esquel (EQS), some four hours south of BRC, with pax taken to Bariloche by ground transfers.

Iberia operated its last flight from COR to MAD on Saturday, January 14 after serving the route for a little more than fifteen months.  The Spanish airline started flying to Argentina's second-largest city on October 1, 2010 with the service being flown mostly by A340-300's but also with the larger A340-600.  The route was operated both non-stop to Madrid and via Rio de Janeiro's Galeao Airport (GIG).  At one point, there was talk of trying to save the route by having the flight stop in Asuncion (ASU) Paraguay but that did not materialize.

Aircraft that operated the last flight was A340-300 EC-LKS per http://gscordoba.blogspot.com/

Andes leased two CRJ-900's from Bombardier in 2010 but only operated them for just over a year before returning them to the Canadian manufacturer in August 2011.

They were operated mostly on scheduled routes from AEP (Buenos Aires - Aeroparque) to SLA (Salta), home base for the airline where it was first formed in the mid-2000's. One of the reasons for the return of the aircraft was seriously diminished passenger traffic due to the frequent closures of airspace across the center of Argentina (including Buenos Aires) caused by drifting ash from eruptions by the Puyehue volcano in Chile since early June 2011. This problem continues from time-to-time to this day though the volume of ash is considerably smaller than when the eruptions first took place.

Andes' scheduled routes have been taken up by the carrier's MD-80's but the airline's main business is its charter operations. 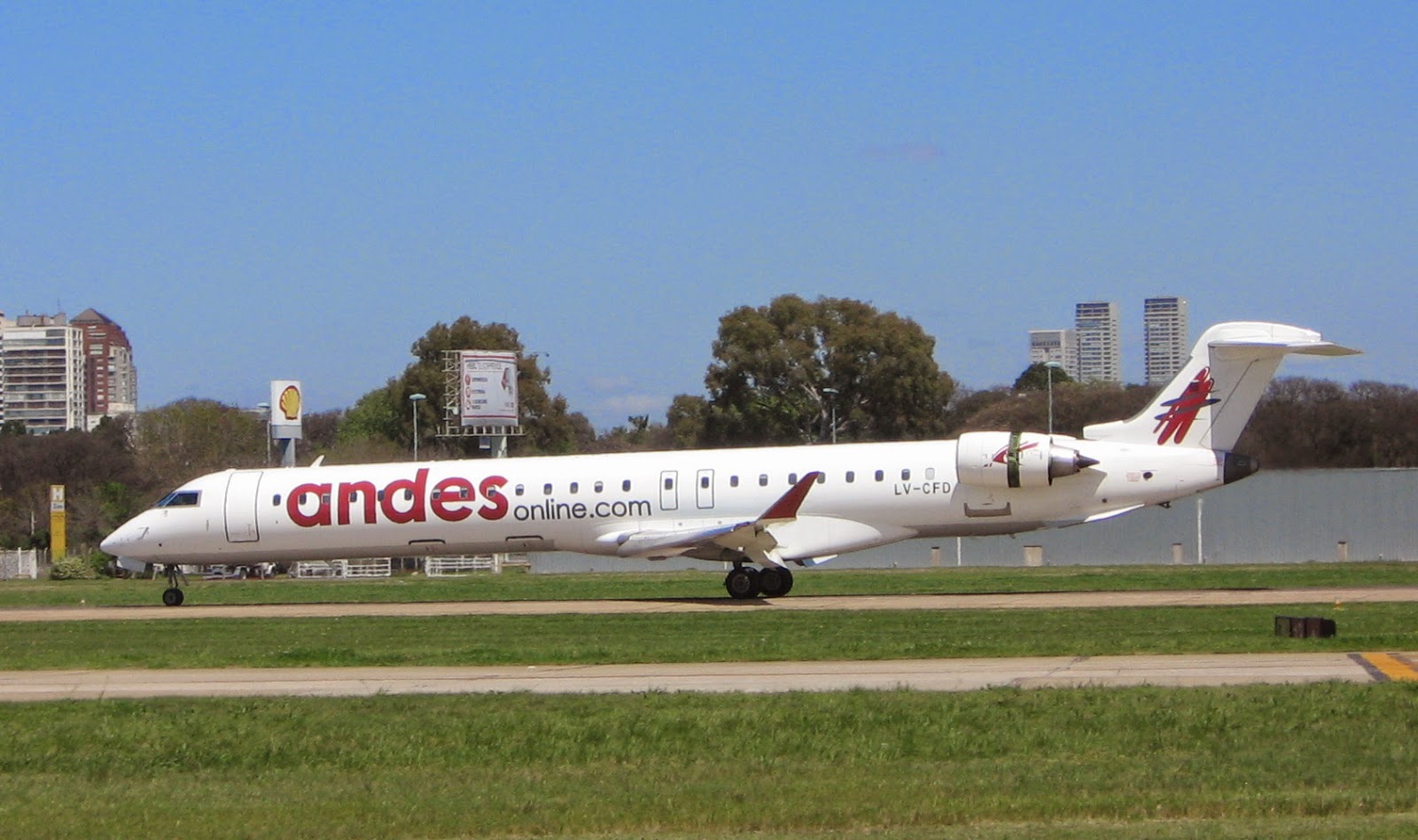 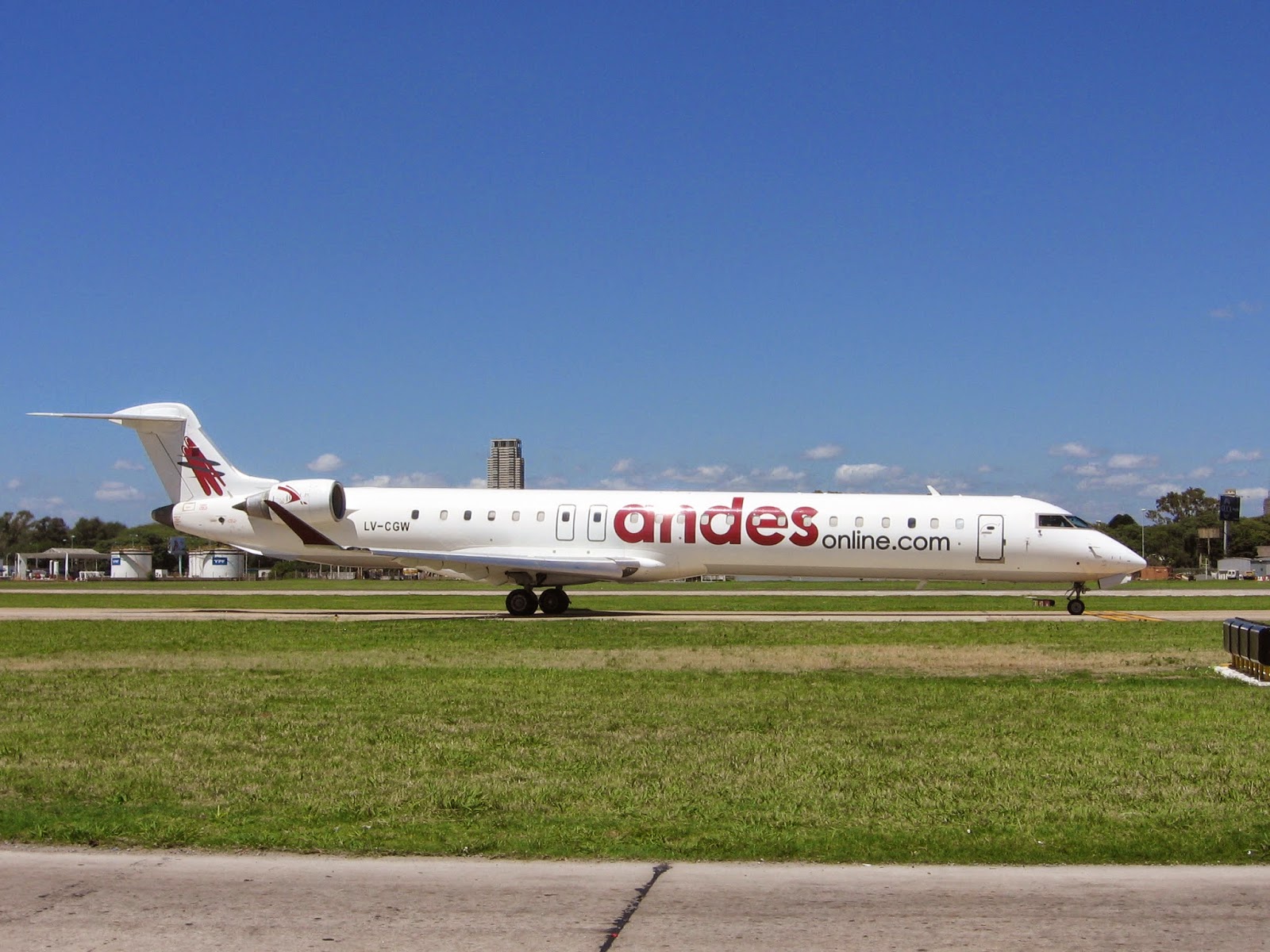 LV-CGW was delivered to Andes on 29Sep10 but returned to Bombardier on 13Aug11. Here it is pictured taxiing for takeoff at AEP on 29Jan11. 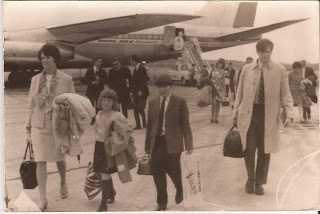 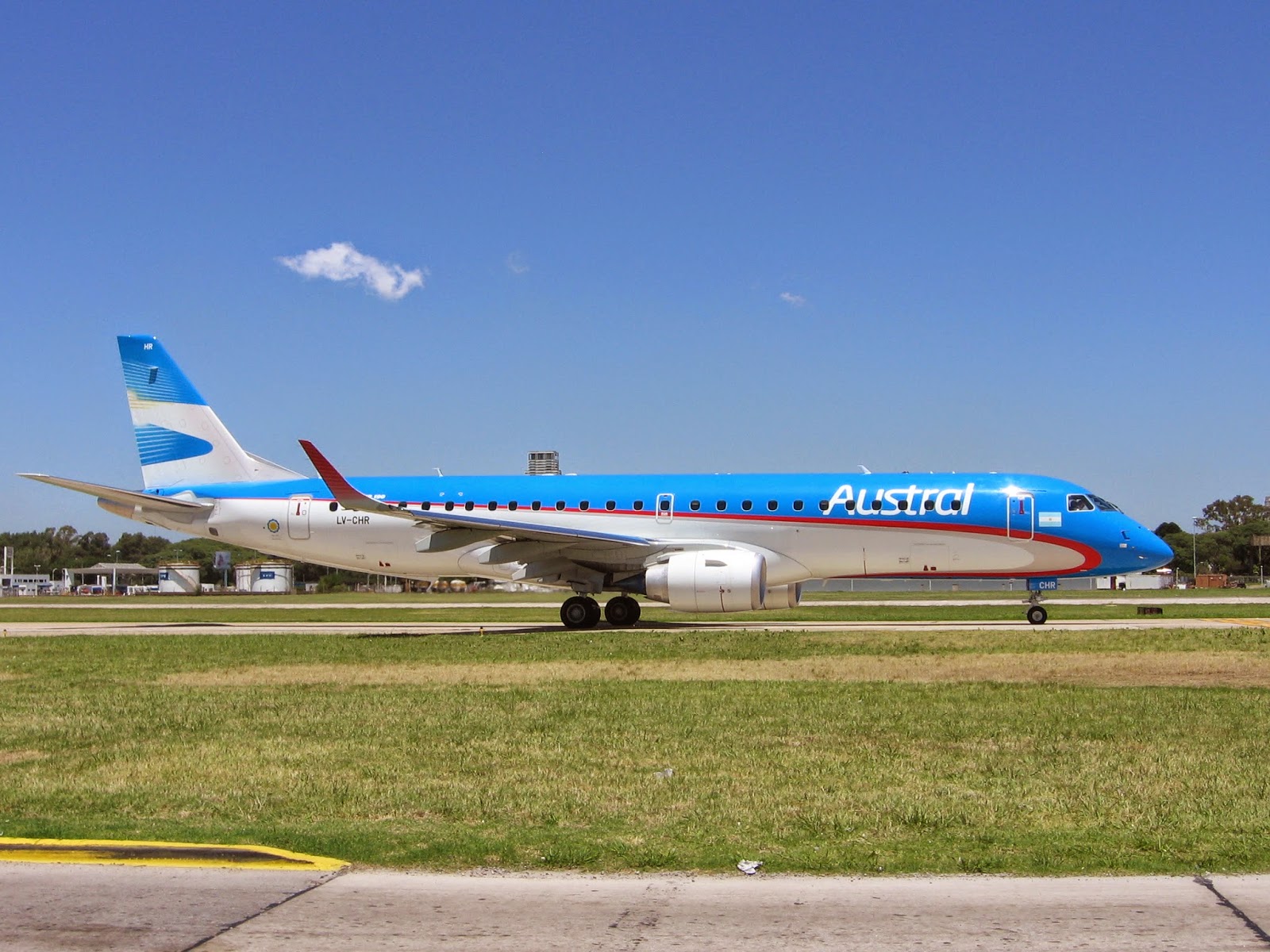 Andes Lineas Aereas received authorization on January 4 to fly the two A320's it has wet-leased from Vueling, and that have been in Argentina since late December, on charters to various destinations in Latin America.

The company plans to fly the aircraft to Punta Cana and Samaná in the Dominican Republic, Margarita Island off the coast of Venezuela, and Porto Seguro, Salvador, Natal and Maceió in Brazil.  While awaiting authorization for the use of these aircraft, Andes used its existing MD-80 fleet to operate these services.

Emirates Airlines started daily service from Dubai to Buenos Aires via Rio de Janeiro on January 4.  Flights will be operated with 777-300ER aircraft.  The first flight, EK247, was greeted with a traditional water cannon salute at Buenos Aires' Ministro Pistarini de Ezeiza Airport (EZE) when it arrived there at 8:20pm on the 4th commanded by Argentine captain Marcos Medina.

Several dignitaries, including Enrique Meyer - Argentine Minister of Tourism, Thierri Antinori - Vice President of Sales for Emirates, Ruben Caro - the Argentine ambassador in the United Arab Emirates, Mohamed Eissa Alzaabi - UAE ambassador to Argentina and Marcelo Cervetto from Aeropuertos Argentina 2000, operator of Ezeiza Airport, participated in a ceremony marking the inaugural flight and noting the connectivity that the flight will provide through EK's Dubai (DXB) hub as well as the seats offered on the EZE-GIG (Rio de Janeiro) and v.v. sectors.