* The FAA also flew three F-28's as VIP+Presidential transports, one of which also operated as a military transport and with LADE.

This posting will cover the first five aircraft noted above with two postings to follow this one covering the other six planes.

With LADE, the aircraft operated flights to remote locations in the southern Patagonia region of Argentina plus, starting in 1977, services connecting Comodoro Rivadavia (CRD) with Puerto Argentino / Port Stanley in the Malvinas / Falklands. 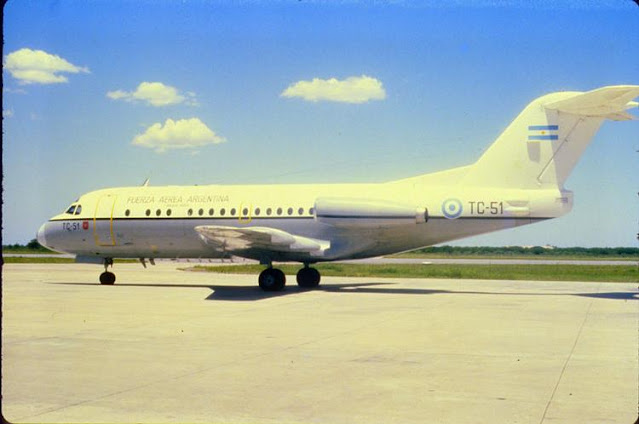 TC-51 joined the 1st Aerial Brigade based out of El Palomar Air Force Base and flew for Lineas Aereas del Estado (LADE). Unlike the other four F-28's operated by the FAA, TC-51 was never modified with a cargo door, always flying only passengers in the main cabin.

The aircraft continued in steady service for the FAA until it suffered an accident on 16Aug89.  TC-51 was departing from Bariloche (BRC) to Neuquen (NQN) in marginal weather when it partially departed the left side of the snow-covered runway.  The pilot was able to regain control of the aircraft but it was not able to take off properly, "struck an ILS aerial, crossed a ditch and ended up against a dyke".

The aircraft was apparently flying for LADE as it had 65 occupants onboard, some of whom were reportedly seriously injured but all survived.  TC-51 was "damaged beyond repair" and finished its career with a total of 14,002 hours and 18,255 cycles on its airframe. 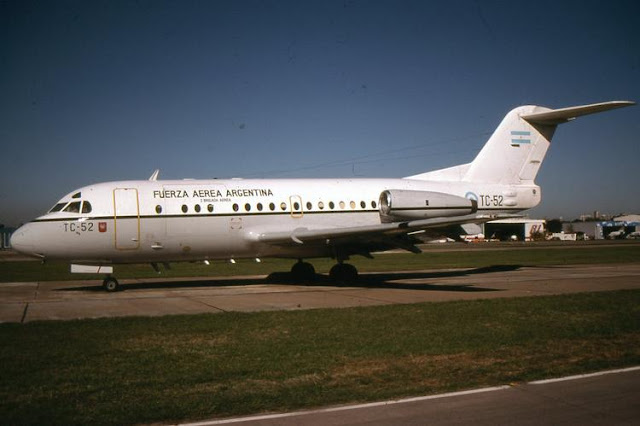 The aircraft also gained the Argentine civil registration LV-RCS in 1991, flying for Dinar Lineas Aereas, an Argentine regional carrier of the time, for two years after which it was re-registered back to TC-52 in 1993.

Like three other F-28's operated by the FAA, TC-52 was later modified with a cargo door. 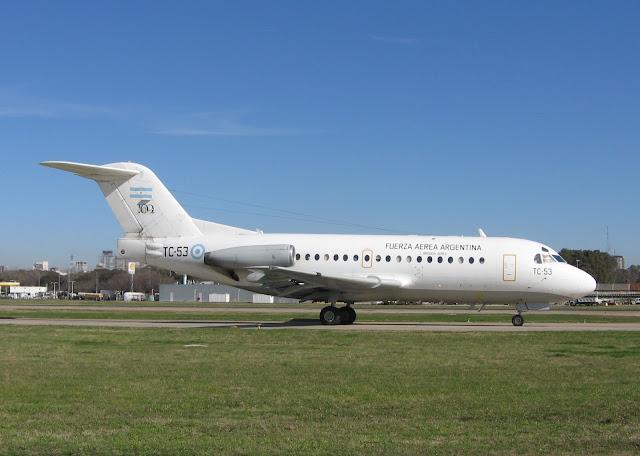 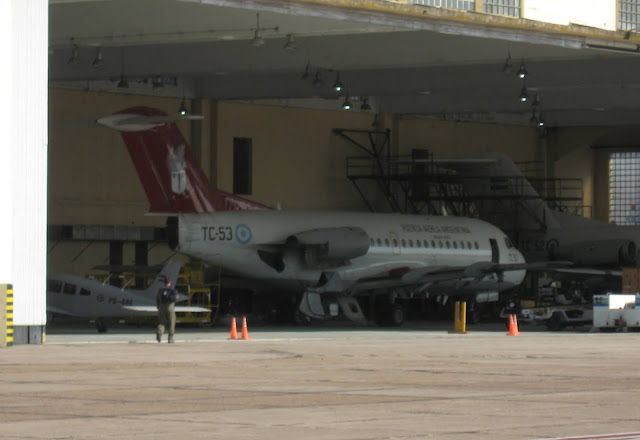 Fuerza Aerea Argentina F-28 Mk-1000C, TC-53 (c/n 11020), at Buenos Aires El Palomar (EPA) on 17Dec19 with its tail painted in red colors and sporting its unit insignia in commemoration of the retirement of the F-28 type from FAA service in August 2019 (except that TC-52 continues to fly for the FAA until this day).  (Phil Perry Photo)
F-28 Mk-1000, (c/n 11020), first flew in 1970 with Fokker delivering it to its US marketing partner Fairchild Hiller Corp. as N283FH in June 1970.  Fairchild Hiller manufactured the Fokker F-27 as the Fairchild F-27 and a stretched version as the FH-227, with the production run of both types totaling 206 airframes.
The company apparently operated N283FH as an executive transport until 1975 when a cargo door was added converting the aircraft to an F-28 Mk-1000C and the plane was delivered to the Fuerza Aerea Argentina as TC-53 on 07May75.  The aircraft promptly joined the 1st Aerial Brigade and Lineas Aereas del Estado where it flew until wing cracks were discovered on 16Aug19 leading to its retirement only two weeks before its airworthiness certificate was set to expire on 31Aug19. 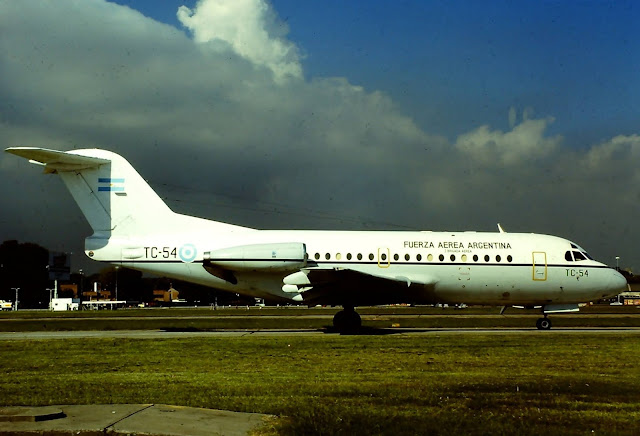 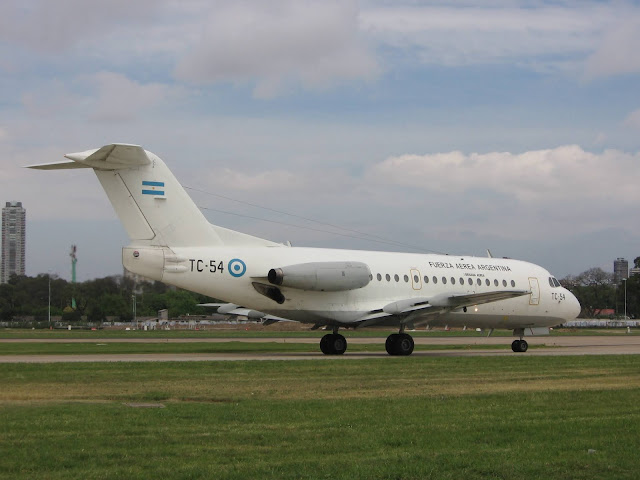 Fuerza Aerea Argentina F-28 Mk-1000C, TC-54 (c/n 11018), at Buenos Aires Aeroparque (AEP) on 24Oct10 in the last scheme that it wore.  (Phil Perry Photo)
This aircraft was delivered to Fairchild Hiller Corp. in March 1970, operating for the company until April 1975 when it was converted to a cargo version with the addition of a cargo door and subsequently delivered to the Fuerza Aerea Argentina as TC-54 in July 1975.
TC-54 joined the 1st Aerial Brigade and Lineas Aereas del Estado (LADE) until August 1992 when it acquired the dual civil registration of LV-VCS, apparently flying for Dinar Lineas Aereas.
By 1994, the aircraft was back flying full time for the FAA / LADE, finally being retired in 2016 with 21,415 hours and 24,515 cycles on its airframe through October of that year. 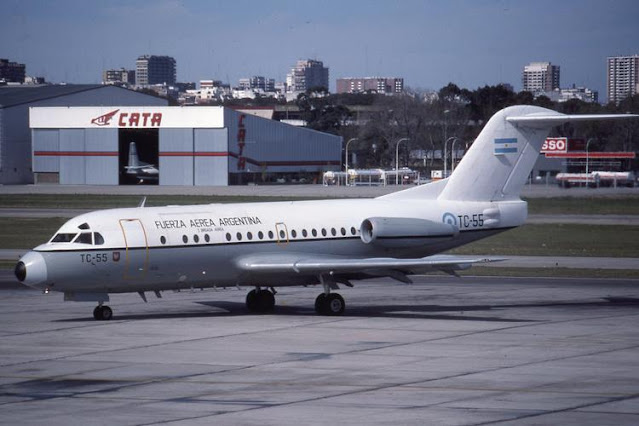 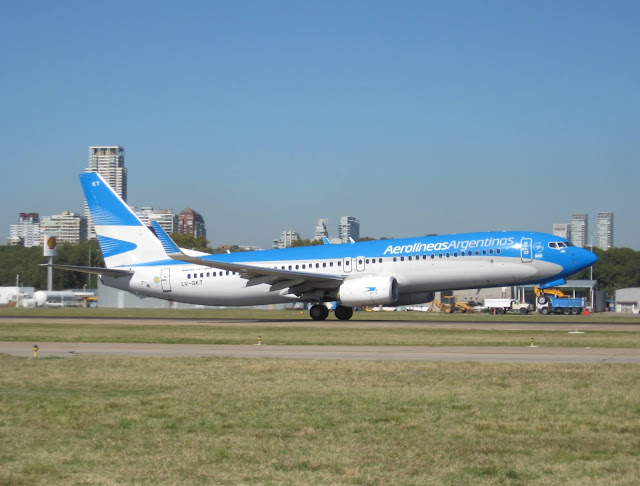 The Argentine Government has operated a fleet of Fokker F-28's as government / military transports since 1970 when the first aircraft, F-28 Mk-1000, T-01, (c/n 11028), was delivered to the Fuerza Aerea Argentina as a VIP presidential aircraft.

A total of 17 F-28's have operated in Argentina; in airline service with Aerolineas Argentinas, American Falcon, Austral, DINAR, and LAER and with the nation's Air Force, Navy, Lineas Aereas del Estado (LADE) and as a VIP / Presidential transport.

The blog editor will soon make three postings with a short history of each F-28 flown by the Argentine government in its various roles. 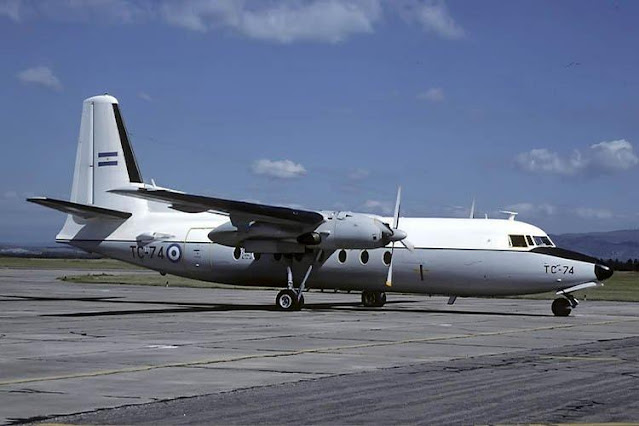 KLM replaced its 408-seat 777-300's on the Amsterdam (AMS) - Buenos Aires Ezeiza (EZE) - Santiago (SCL) route with 294-seat 787-9's in approx. mid-2019.  The equipment change apparently continues to this day as the Dutch carrier has operated the type on its authorized "special flights" on this route several times recently (regularly-scheduled flights have not returned to Argentina yet).

The change effectively reduced the number of Economy Class seats operated by KLM to Argentina and Chile while maintaining the quantity of Economy Comfort and World Business seats as the 777-300's have 334, 40 and 34 seats in each class, respectively, while the 787-9's have 216, 48 and 30 such seating.

The economy class seat reduction might be to balance out the increase in number of flights by KLM on the route in recent years from 4x/weekly to 6x/weekly.  The consistent number of premium cabin seating probably reflects the importance of business travel on this route.

Iberia Airlines started operating the A350-900 on the Madrid (MAD) - Buenos Aires Ezeiza (EZE) route on 25Feb19, the first Latin American airport to see service with this type by IB and the second overall after New York Kennedy (JFK).  The type was scheduled to operate one of Iberia's two daily flights between the Spanish and Argentine capitals.

The equipment change apparently continues to this day as the Spanish  carrier has operated the type on its authorized "special flights" on this route several times in the past week (regularly-scheduled flights have not returned to Argentina yet).

Iberia was scheduled to receive a total of 16 A350-900's by 2021, although the delivery schedule might have been pushed back due to COVID-19.