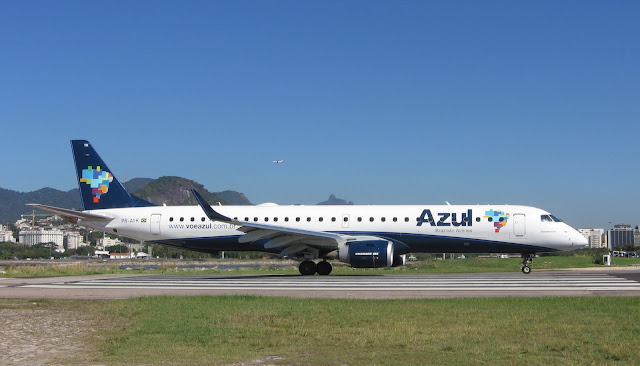 Azul Linhas Aereas of Brazil will fly summer seasonal service from Sao Paulo Viracopos (VCP) and Porto Alegre (POA) to Punta del Este (PDP), Uruguay, using ERJ-195's and ATR-72's, respectively. The flights will be operated on Thursdays and Sundays, effective 17Dec15 to 14Feb16, with extra sections during the Christmas and Carnival holiday periods.

FLEET UPDATE: Austral to Receive 23rd and 24th ERJ-190's in November and December

Austral will receive two ERJ-190's, the 23rd and 24th such aircraft in its fleet, from Republic Airways in November and December this year. The aircraft, which are currently parked out of service in Peterborough (YPQ), Ontario, Canada, will be registered LV-GAQ (c/n 19000275) and LV-GBK (c/n 19000291).  They were originally delivered to Republic in 2009 and differ from Austral's standard fleet in that they have 104 seats vs. the rest of the Austral fleet's 96 seats (88 economy and 8 first class) and do not have inflight entertainment systems.

In addition to serving as a feeder to existing Aerolineas Argentinas / Austral services, Sol will use the six CRJ-200's that it is due to receive in the coming months to fly some of the "thinner" routes that do not have enough traffic to support the use of AR/AU's larger jets plus open up new services, which typically take time to develop for the use of larger aircraft.

The Uruguayan travel blog Portal de America reports that AR/AU has agreed to pay Sol guaranteed fixed rates per block hour of US$ 3,144 for its Saab 340's and US$ 3,885 for its CRJ-200's, which at six hours per day for a 31-day month total US$ 584,784 and US$ 722,610, respectively.  "Portal" contends that this amounts to a subsidy with AR/AU effectively absorbing the Sol operation, but the agreement is similar to arrangements that US carriers have had with their feeders so this would be a matter of debate. 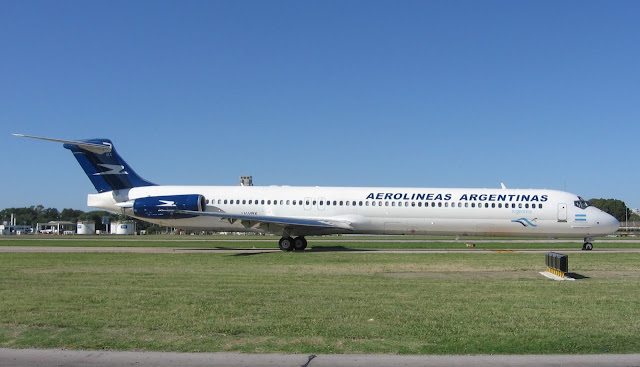 Still wearing its Spanish registration, the aircraft will presumably receive an Argentine registration prior to its entry into service in Sol's new role as an Aerolineas Argentinas / Austral feeder airline in October.  Sol is due to receive five more CRJ-200's from Air Nostrum over the next six months.

The first CRJ-200 that Sol will reportedly take delivery of to start fulfilling its expanded code-share agreement with Aerolineas Argentinas / Austral has appeared painted in Austral colors but with Sol titles and a different tail logo from Aerolineas' sister carrier.

This was somewhat unexpected as there has been no announcement of a color scheme change.  However, with Sol transforming itself into a feeder carrier for Aerolineas / Austral, it should not be too surprising that the carrier would abandon its "house" colors in favor of the Austral scheme for greater marketing consistency.

The aircraft in question is currently still with Air Nostrum of Spain as EC-IVH (c/n 7915) but is expected to be delivered to Austral on 22Sep15 and enter into service in mid-October.

Recent photo of the aircraft in Montpellier, France as published by Rwandan Aviation via the excellent Argentine aviation blog Rollout Spotting:

http://aerospotter.blogspot.com.ar/2015/09/se-viene-el-canadair-para-sol.html
An artist's impression of a CRJ-200 in Sol "house" colors as posted in late August, also from Rollout Spotting:

However, the editor of this blog has since learned that United will fly the longer-fuselage and higher-capacity 787-9 on the route, being only the second carrier to operate the newer variant to EZE, the other being LAN, which upgraded its existing 787-8 service from Santiago (SCL) to the 787-9 on 01Apr15.  United is also the first and so far only US carrier to have taken delivery of the 787-9.

Nearly all of the additional seats on the 787-9 are premium seats suggesting that the airline is primarily targeting higher-fare passengers for the increased traffic that it anticipates. 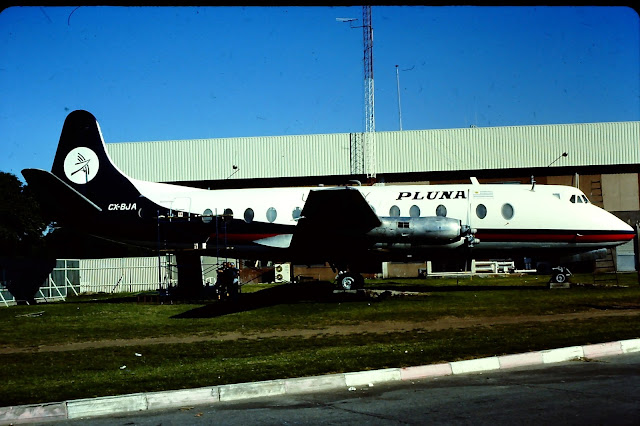 ex-PLUNA Viscount 827, CX-BJA (c/n 400), which was on exhibit for many years at Montevideo (MVD) as a "gate guard" and then stored in the open, is due to be restored by the Uruguayan Museum of Aeronautics in the near future.

CX-BJA was first delivered to VASP of Brazil as PP-SRF in 1958/1959 where it flew until November 1975 when PLUNA bought it to replace Viscount CX-AQO which was written off after running off the runway at Buenos Aires Aeroparque (AEP) earlier that year. CX-BJA flew on PLUNA's route system, mostly the "Air Bridge" linking Montevideo (MVD) and Buenos Aires Aeroparque (AEP), until it was retired in 1982.

The aircraft's titles were removed and it was used as a fire trainer until October 1988 when it was decided to preserve the plane.  Although the aircraft was donated to the museum, it was painted in the blue/orange color scheme used by the airline at that time (pictured above) and put on display beside Montevideo's (MVD) old terminal as a "gate guard" in 1991.

PLUNA's Viscount fleet actually never flew in these colors having instead sported a light blue cheatline scheme (pictured below) with one aircraft, CX-AQO, having its tail painted up in the same lively orange/blue scheme of PLUNA's first 737-200, CX-BHM, that was delivered in 1969. 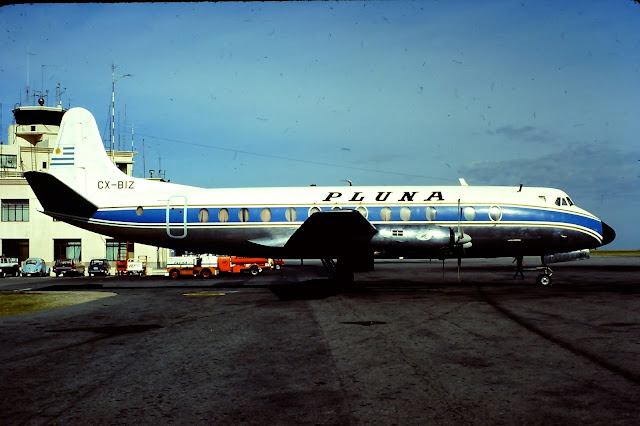 When construction of Montevideo's (MVD) new terminal started in 2004, CX-BJA was moved to a remote location of the airport where it languished decaying from exposure to the elements until it was recently moved near to the museum adjacent to the new terminal.

The aircraft will be restored, at least to the extent of having its exterior painted, hopefully in the standard PLUNA Viscount colors of the 1960's and 1970's.  Plans are to display it at the Museum of Aeronautics.

Photos of the move: 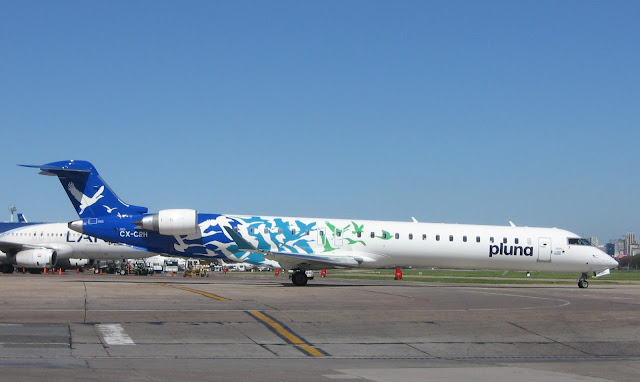 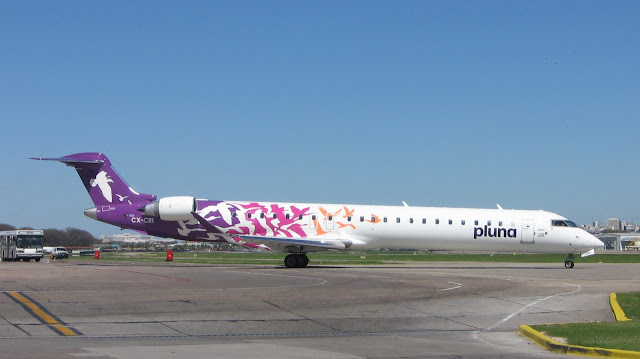 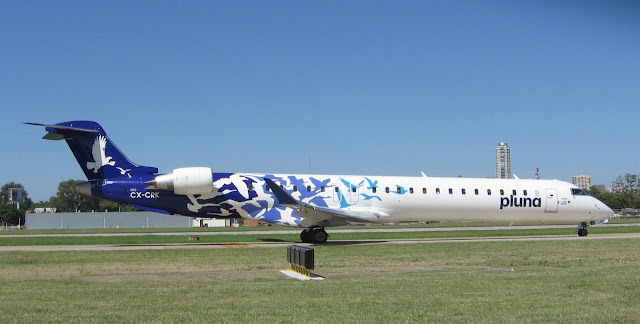 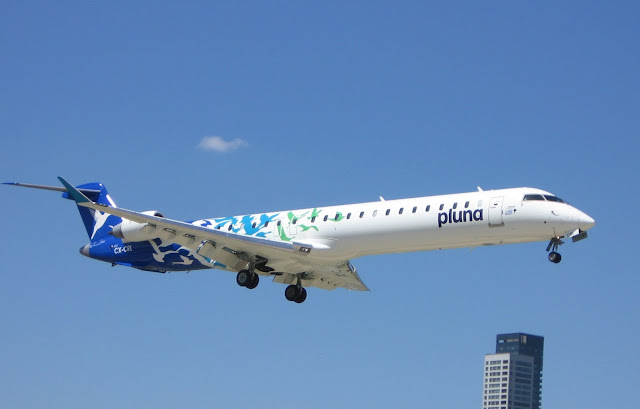 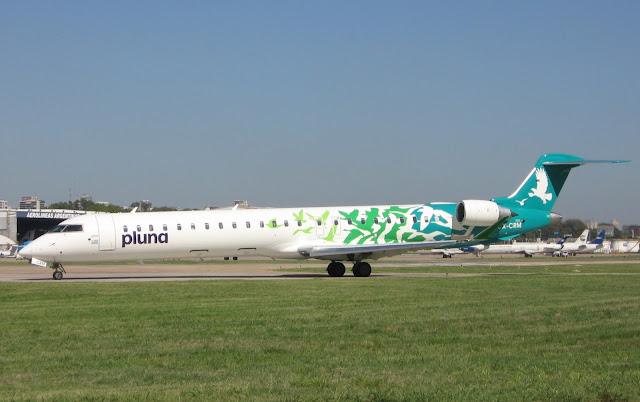 Link to Photo of CX-CRN:

This is the first of two postings containing photos of all 13 PLUNA CRJ-900's in the form of 12 photos and one photolink accompanied by the respective aircraft histories.  This first posting features illustrations of the seven company-owned aircraft and the second posting will feature all of the leased airframes.

All of the photos were taken by the editor of this blog, Phil Perry. 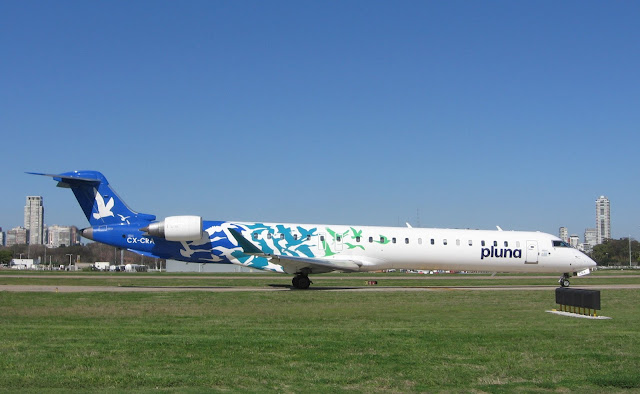 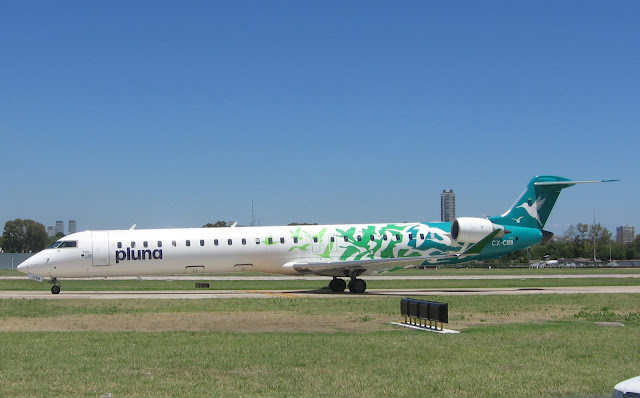 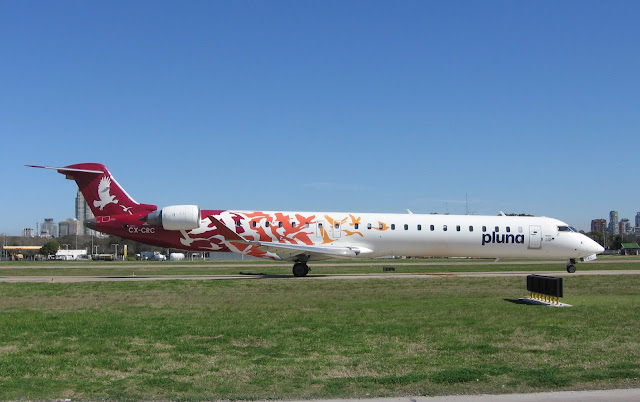 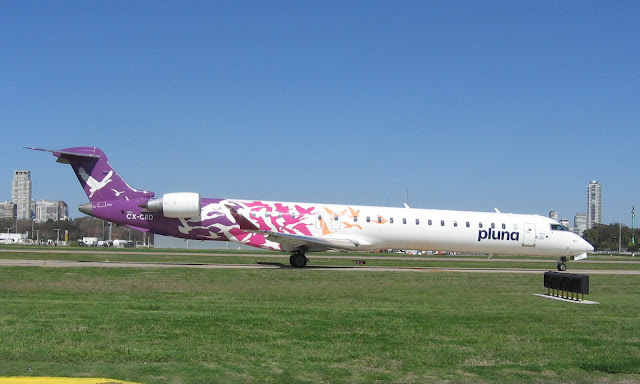 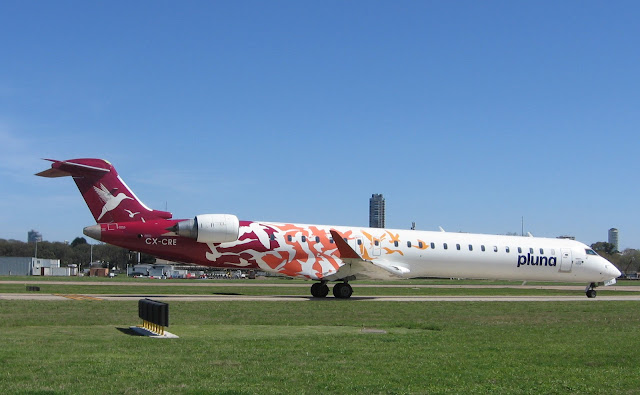 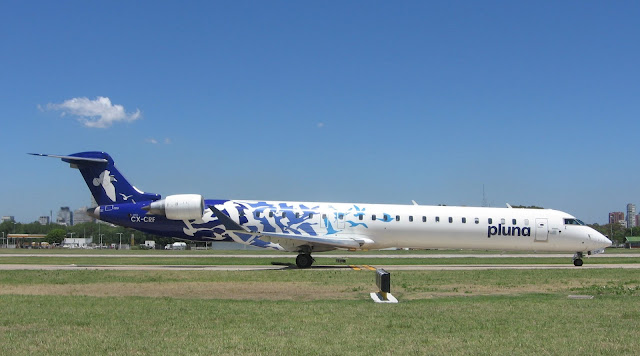 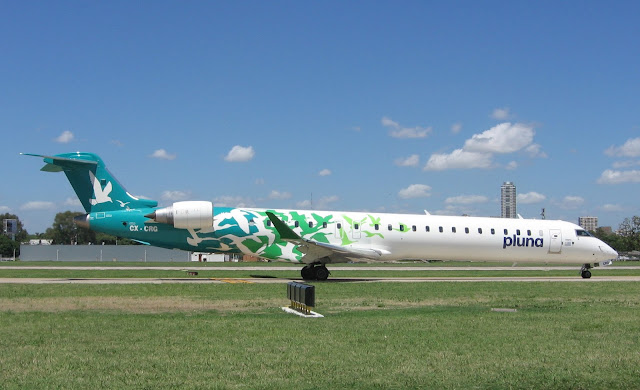 Photo of this aircraft with Aerovip titles and Argentine registration:

The fifth, sixth and seventh ex-company-owned PLUNA CRJ-900's departed Montevideo (MVD) in May, July, and August, respectively, leaving none of the former Uruguayan flag carrier's Canadair regional jets at the capital airport.

CX-CRE (c/n 15185) departed Montevideo (MVD), probably already re-registered as C-GMXQ, on 22May15 and joined Skyservice Business Aviation of Toronto.  It was in storage as of August 2015 but is due to go to GoJet Airlines of Bridgeton, Missouri, a regional jet operator that feeds both Delta and United with 45 CRJ-700's and 4 CRJ-900's operating 220 daily flights to 60 destinations and carrying over 4 million passengers annually.

CX-CRD (c/n 15180) was the very last ex-PLUNA CRJ-900 to leave Montevideo (MVD), more than three years after the airline ceased service, on 07Aug15 also to Skyservice and eventually GoJet.

With Sol due to receive six CRJ-200's from Air Nostrum of Spain over the next few months, the excellent Argentine aviation blog Rollout Spotting recently published an artist's image of a CRJ-200 painted in full Sol colors:

These will hopefully be gracing Argentine skies soon !
Posted by Phil BOS E-Mail: psp757@hotmail.com at 3:25 PM No comments:

Lineas Aereas del Estado (LADE), which is run by the Fuerza Aerea Argentina, is scheduled to take delivery of two ERJ-135's on a wet-lease within the next 60 days. These aircraft will reportedly replace the few remaining Fuerza Aerea Argentina F-28's used by LADE and will complement the four Saab 340B's flown by the carrier mostly on routes to the lightly-populated Patagonia region of southern Argentina.

LADE's historical mission since its founding in 1944 has been to foster the development of remote regions and at one time served some 30 communities but today flies to only 10 airports; Buenos Aires Aeroparque (AEP) and Mar del Plata (MDQ) in the province of Buenos Aires, Bariloche (BRC), Comodoro Rivadavia (CRD) and Puerto Madryn (PMY) in northern Patagonia, Calafate (FTE), Rio Turbio (RYO), Rio Gallegos (RGL), Rio Grande (RGA), and Ushuaia (USH) in southern Patagonia and Tierra del Fuego.

The Copa America - Chile 2015 football/soccer championships with national teams from all over the Americas participating was played in Chile in July and August and to celebrate the occasion, the Chilean airline LAN and some of its South American affiliates, including TAM, applied special "Copa America Chile 2015" stickers to select aircraft in their fleets. 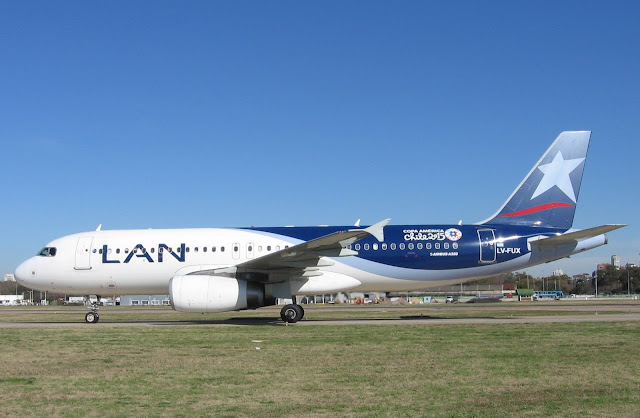 For the full list of 39 aircraft that wore the sticker, visit the following Gacena Aeronautica webpage and scroll about a third of the way down the page:

View the following YouTube video of the sticker being applied to a LAN 767-300:

Andes Lineas Aereas operated a charter for the Racing football/soccer club to Paraguay to play a Copa Libertadores match against local side Guarani on 20May15.  To honor the occasion, the airline added a sticker (or painted on) the club's logo to the nose of the MD-83 operating the flight, LV-AYD (c/n 53015/1818) and added small titles saying "Racing Club El Primer Grande Argentino" (Racing Club, the first great Argentine club).  The stickers were apparently on the aircraft for a very short time as the editor of this blog has not seen any other photos of the plane with them on it.

Link to photo on the blog Rollout Spotting:

At the same time, Aerolineas will upgrade its existing Buenos Aires Ezeiza (EZE) - Cancun (CUN) one-stop 737NG service to non-stop A340-300 flights for the summer season, also 02Jan16 - 29Feb16.  The carrier flies this route 2x/weekly in the Argentine winter and 4x/weekly in the summer.