Aerolineas Argentinas was scheduled to downgrade the size of aircraft that it operates from Buenos Aires Ezeiza (EZE) to Caracas (CCS) from A340-300's to 737-800's, effective 08Aug14, but at the same time increase frequency on the route from 5x to 6x/week until 01Sep14, at which time the route was scheduled to go to daily service.

A330-223 LV-FNJ (c/n 300), the last of four A330's being leased from ILFC, arrived at Buenos Aires Ezeiza (EZE) on 07Jun14.  This aircraft was first delivered to SABENA in 1999 and also served with VG Airlines and Malaysia Airlines before the current lease with Aerolineas Argentinas. 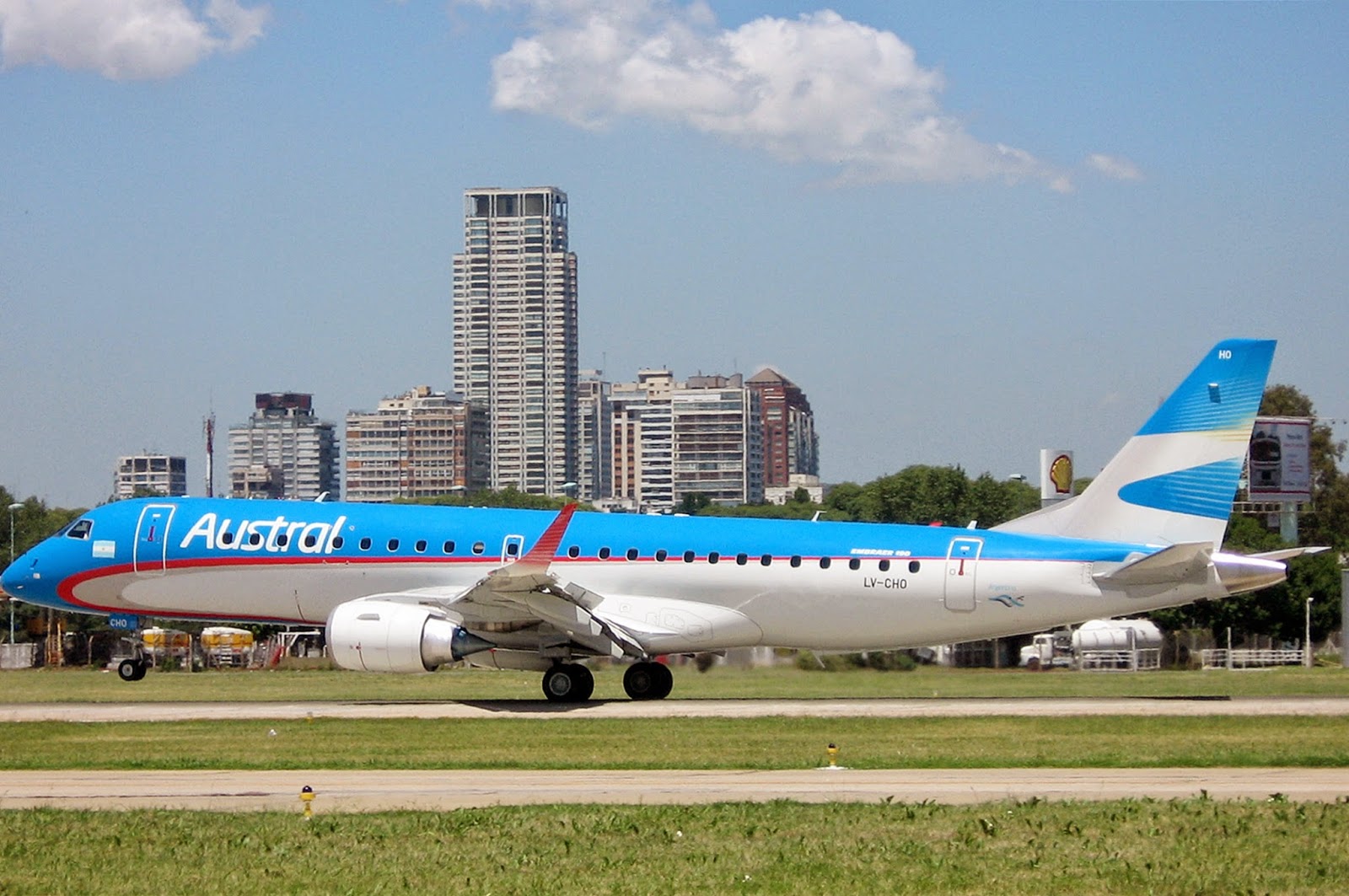 The route is being flown 2x/weekly as an Iguazu (IGR) - Rosario (ROS) - Cordoba (COR) roundtrip using Embraer 190's on Wednesdays and Sundays.

The addition of the legs between Rosario (ROS) and Cordoba (COR) comes as bad news to Rosario-based SOL Lineas Aereas that has been flying the route with Saab 340's since the carrier's inception seven years ago. 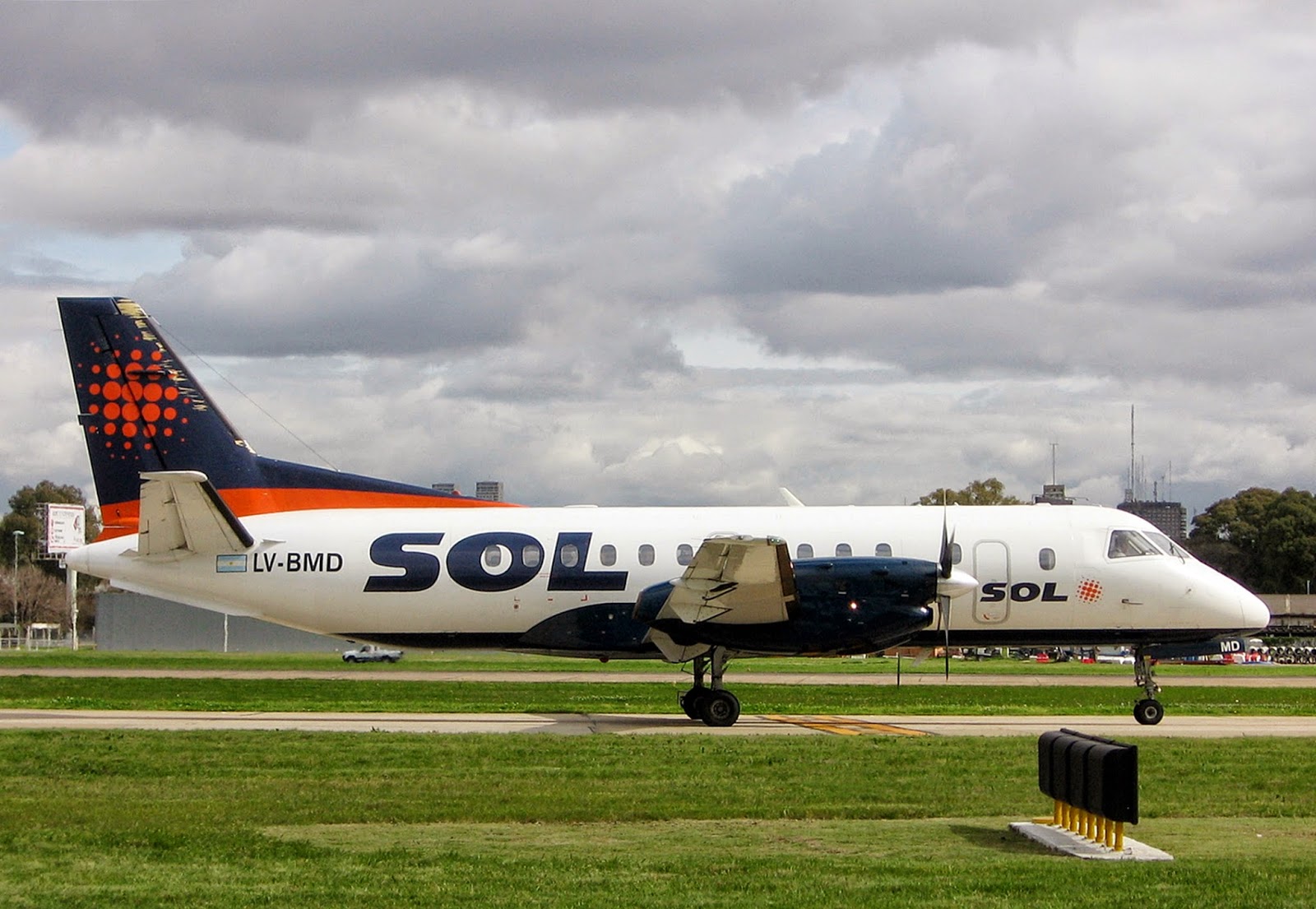 SOL Lineas Aereas has made adjustments to its route structure to adapt to changes in the competitive marketplace, mostly by Aerolineas Argentinas and sister company Austral.

The carrier also discontinued flights to Bariloche (BRC) and Esquel (EQS) in Patagonia and Ushuaia (USH) in southern Argentina on 20May14.

SOL's route system looked like this as of late July:

All flights are operated with SOL's fleet of five Saab 340's.

During the last few months, Turkish Airlines changed the equipment it operates on the Buenos Aires Ezeiza (EZE) - Istanbul (IST) route from the 777-200 to the A330, which features Comfort Class, to the 777-300ER with the airline's new Premium Class offering.
Source:

AR Jet is an Argentine charter airline based at Buenos Aires Ezeiza (EZE) that was founded in 2010.  It has flown its sole 737-236A, LV-ZYY, (c/n 21799/660) on a limited basis during that time, mostly for soccer teams and fans traveling to matches, such as for the Paraguayan Football Association in October 2013, the Boca Juniors - River Plate match in Cordoba in February 2014, the River Plate - San Lorenzo match in San Luis in May 2014 and other occasions as well.
It was last spotted in Catamarca (CTC) in northwest Argentina on 31Jul14.

LV-ZYY, which was delivered to British Airways in 1980 as G-BGDJ also flew for Aerolineas Argentinas from 2002 to 2009.  It is believed to be the only 737-200 still in active service in Argentina.

Photo of the aircraft in full AR Jet colors and titles in 2011:

Photo of LV-ZYY more recently in AR Jet colors but with no titles:

Aerolineas Argentinas' sister airline, Austral Lineas Aereas, was due to start 4x/weekly Buenos Aires Aeroparque (AEP) - Santa Cruz, Bolivia (VVI) flights on 02Jul14 using its Embraer 190's but this service apparently had not started yet as of 26Jul14.  Aerolineas Argentinas was slated to take over the flights in August with 737-700's.

Prior to the opening of Aeroparque to increased regional international destinations in 2010 only Montevideo (MVD) and Punta del Este (PDP) were served from the downtown airport.

Aerolineas Argentinas retired several aging A340's from service earlier this year as it has taken delivery of the final A330's that it currently has on order.

LV-ZPJ A340-211 (c/n 074) also originally flew with Cathay Pacific and Philippine Airlines and passed to AR in 1999 flying its last service with Aerolineas on 17May14 from Rome Fiumicino (FCO) to Buenos Aires Ezeiza (EZE).  This aircraft is scheduled to undergo a major check after which it is rumored that it will be transferred to the Fuerza Aerea Argentina to serve as a VIP transport.

LV-BIT A340-313 (c/n 093) was originally delivered to Air Canada in 1995 and also flew for BWIA and Caribbean Airlines before joining Aerolineas in 2007. It was scheduled to fly from Buenos Aires Ezeiza (EZE) to Goodyear Municipal Airport, Arizona, USA on 22May14 for storage and possible scrapping.

After a six-year absence from Cordoba (COR), TAM Brazilian Airlines reintroduced service to Sao Paulo Guarulhos (GRU) on 01Jul14 with 5x/weekly flights operated by A320 aircraft.  Service is expected to increase to daily flights by November.

Aerolineas Argentinas will reduce its A330/A340 flights between Buenos Aires Ezeiza (EZE) and Miami (MIA) from 14x/week to 10x/week effective September 2014 due to lowered demand resulting from the devaluation of the Argentine peso and weakness in the Argentine economy. 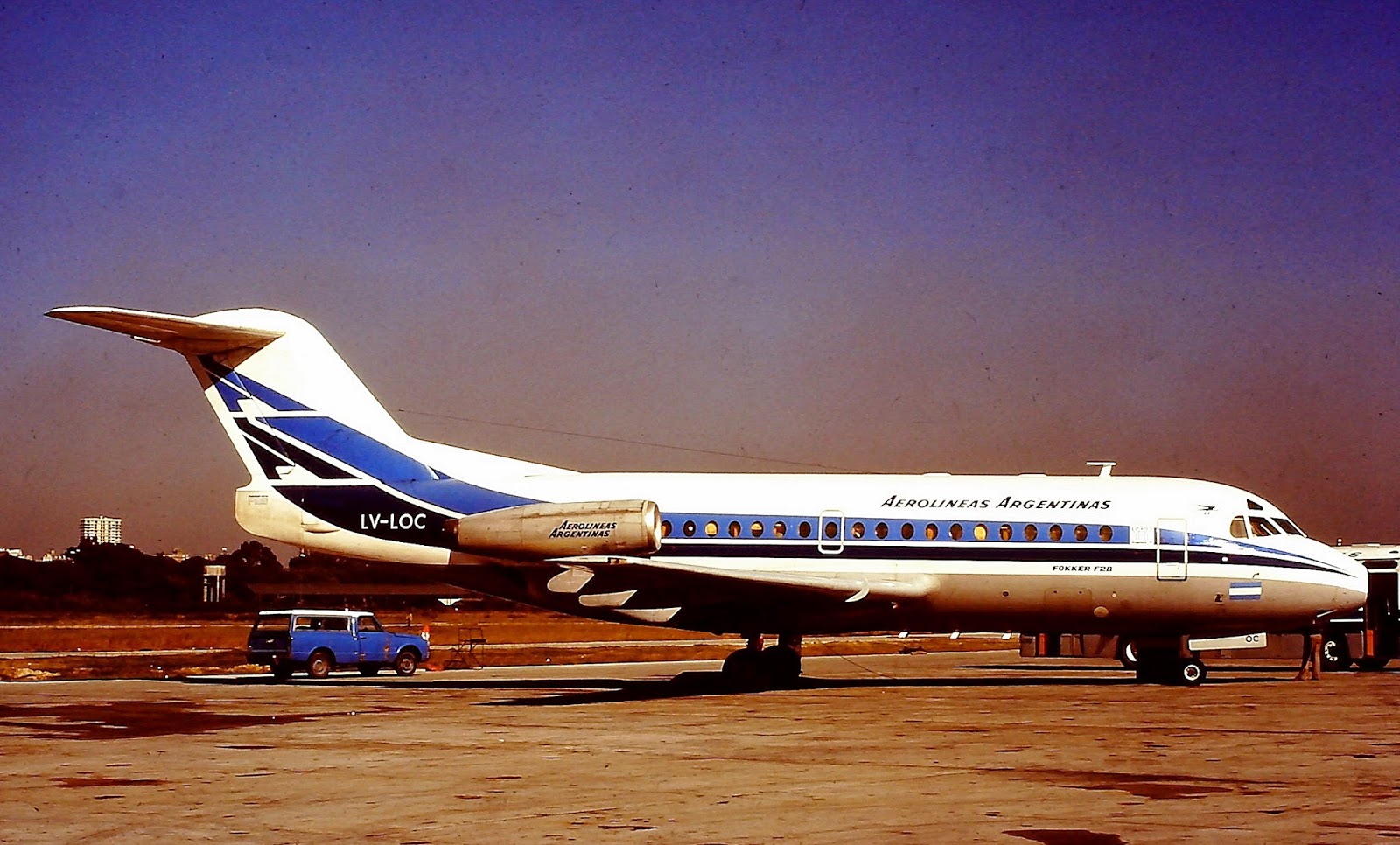 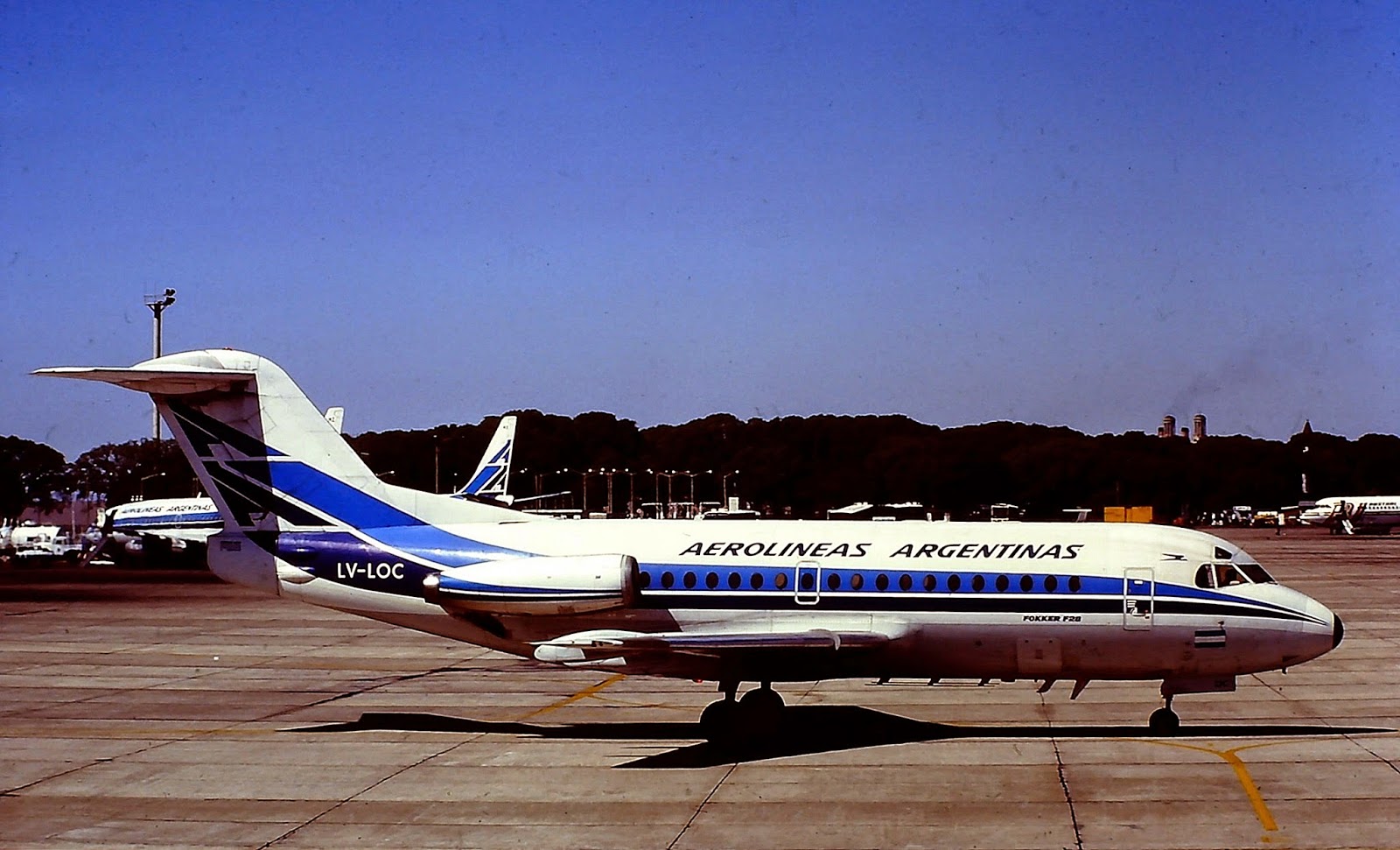 Aerolineas Argentinas flew 1x/weekly flights on Sundays from Sao Paulo Guarulhos (GRU) to Mendoza (MDZ) from 22Jun14 to 11Aug14 using 737-700's. An extra section was also scheduled to operate on Thursday, 19Jun14.  The main purpose of the flights is to bring Brazilian skiers to the Argentine ski resorts along the Andes Mountain range near Mendoza.

The US$ 270 million satellite, which was manufactured by the Province of Rio Negro state entity, Invap, and the national government agency, Arsat, is scheduled to be launched into space orbit in mid-October.