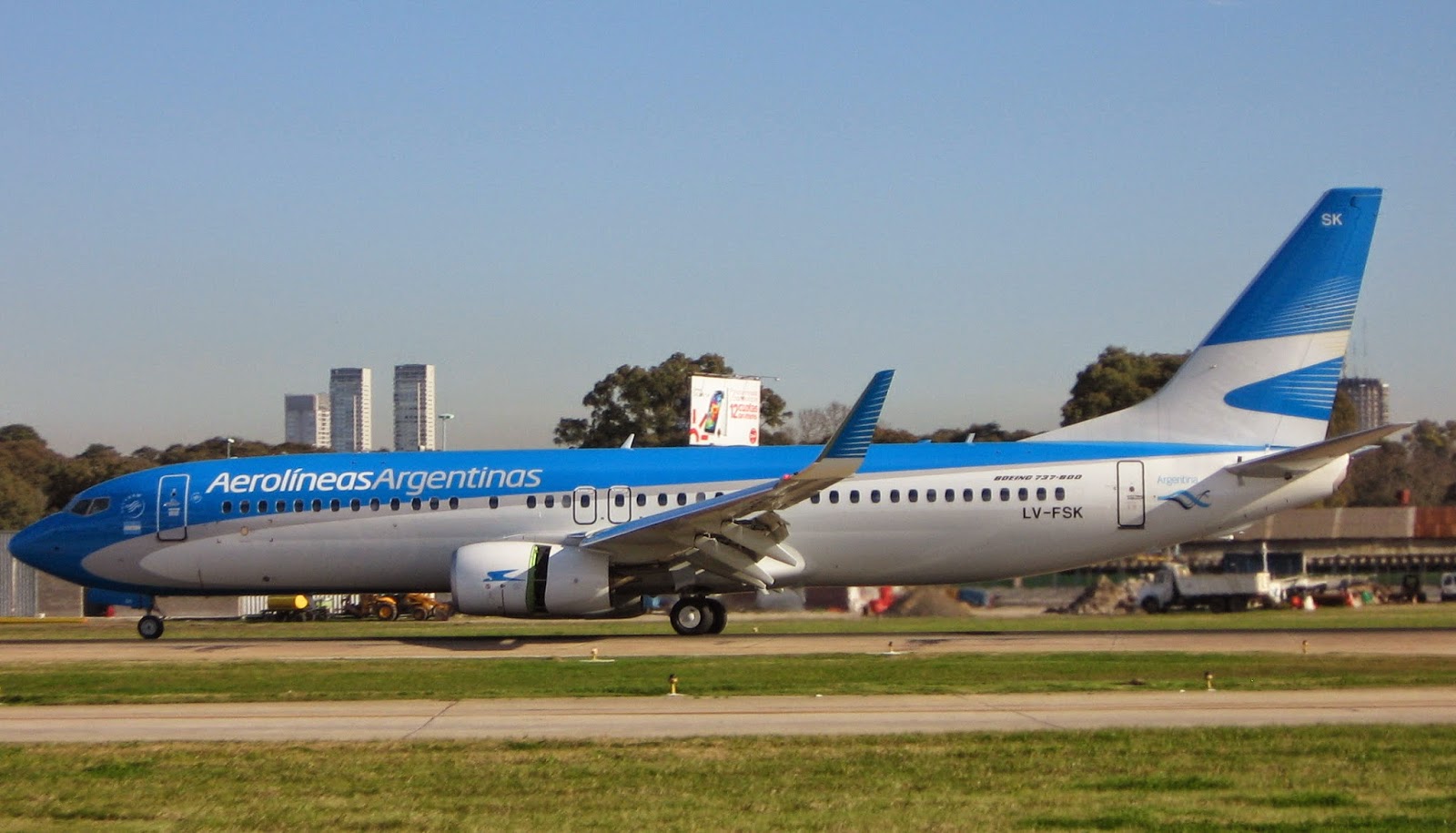 A spectacular photo taken at BFI (via Linea ALA):

Boliviana de Aviacion started service from Santa Cruz de la Sierra's Viru Viru International Airport (VVI) to Salta (SLA) on 15May14.  Flights will be operated 2x/weekly on Thursdays and Saturdays using 737-300's.  These are the only international flights from Salta, a city of 535,000 people in northwestern Argentina near the Bolivian, Chilean and Paraguayan borders.

The new service is designed to reinforce tourism in Bolivia and northwestern Argentina and foster greater commercial and cultural ties between the two regions plus it will allow residents of Salta to connect to Boliviana's flights to Madrid (MAD), Sao Paulo Guarulhos (GRU), and new service to Miami (MIA) set to start on 06Jun14.  Presently, "Saltenios" need to fly south to Buenos Aires before traveling onward to foreign destinations.

Lufthansa is scheduled to replace the 747-400's that it currently operates on the Buenos Aires Ezeiza (EZE) to Frankfurt (FRA) route with the 747-8 on 26Oct14 coinciding with the changeover by most international airlines to their winter schedules.  The German airline is the only foreign carrier to have consistently operated the 747 to Argentina in recent years with many airlines opting for smaller widebody types, such as the 777 and A340.

An advance look at the type came about on 04Jun14 when Lufthansa brought 747-8 D-ABYD (c/n 37829/1453) to Buenos Aires Ezeiza (EZE) on an exceptional basis replacing the normal 747-400 flight.  It was reportedly the first time a 747-8 had visited Argentina, at least one belonging to the German carrier.

A Bombardier Q400NG visited BQB Lineas Aereas in Uruguay as part of a South American sales tour in late March.

The aircraft operated a demonstration flight from Montevideo (MVD) to Punta del Este (PDP) for BQB senior executives, pilots, flight attendants, mechanics and other staff with the idea of familiarizing the company with the advantages offered by the latest version of the Q400, including its 1100 nautical mile range and 350-knot cruising speed.

With BQB operating many longer sectors from Montevideo to Brazil the Q400NG's range and speed might be a good alternative to the airline's ATR-72 fleet, albeit a very good aircraft.

Antonov AN-124 flies from Getafe, Spain to Buenos Aires Ezeiza (EZE) with A320 Horizontal Stabilizer

The A320 was taxiing in to position itself at the gate after arriving from Tucuman (TUC) when the left winglet of the 737-800 struck the Airbus' right elevator as it was taxiing out for a return flight to Sao Paulo Guarulhos (GRU). The top part of the the 737-800's winglet broke off and part of the A320's elevator was damaged. 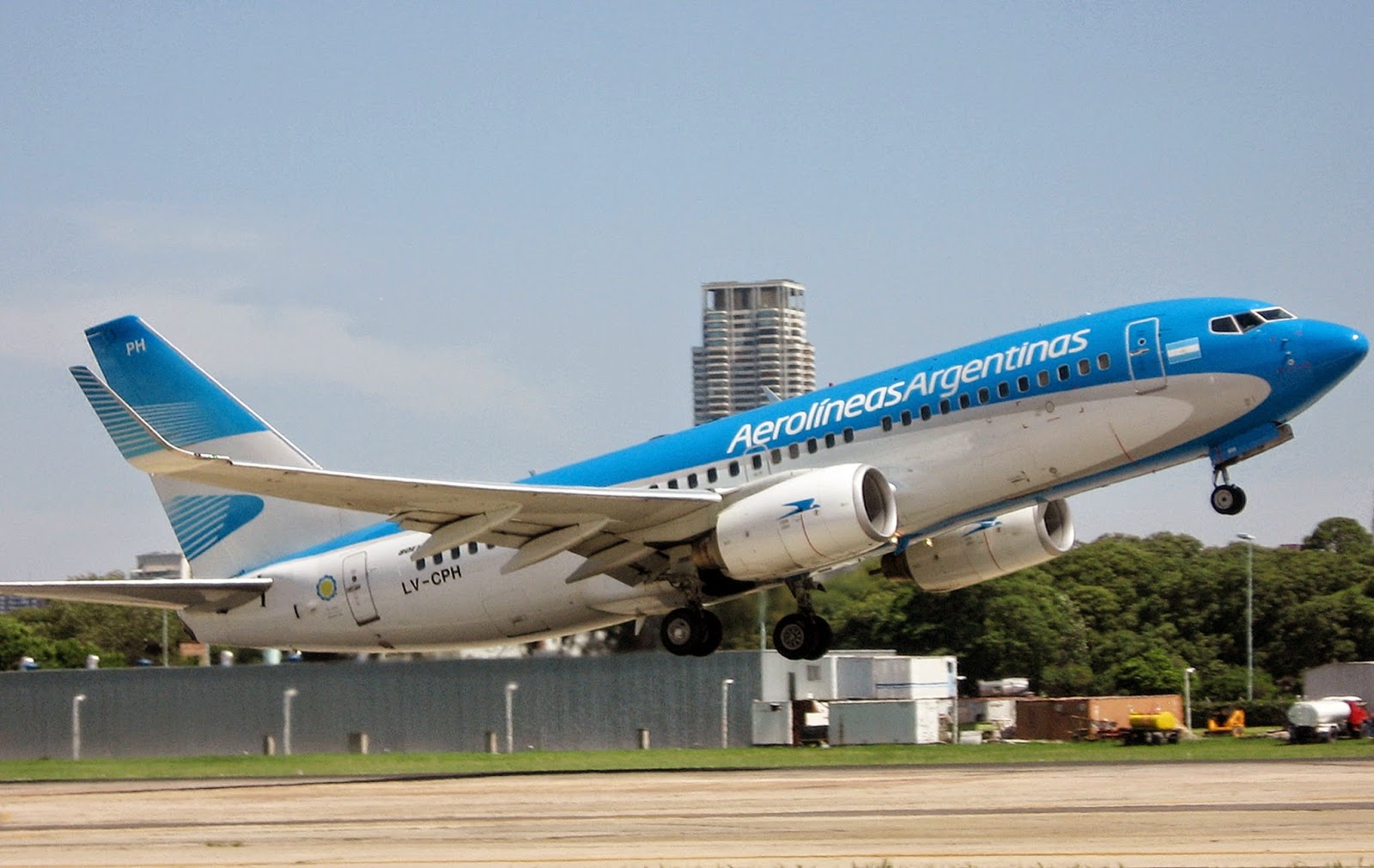 It was the third such incident at AEP in the last six months. 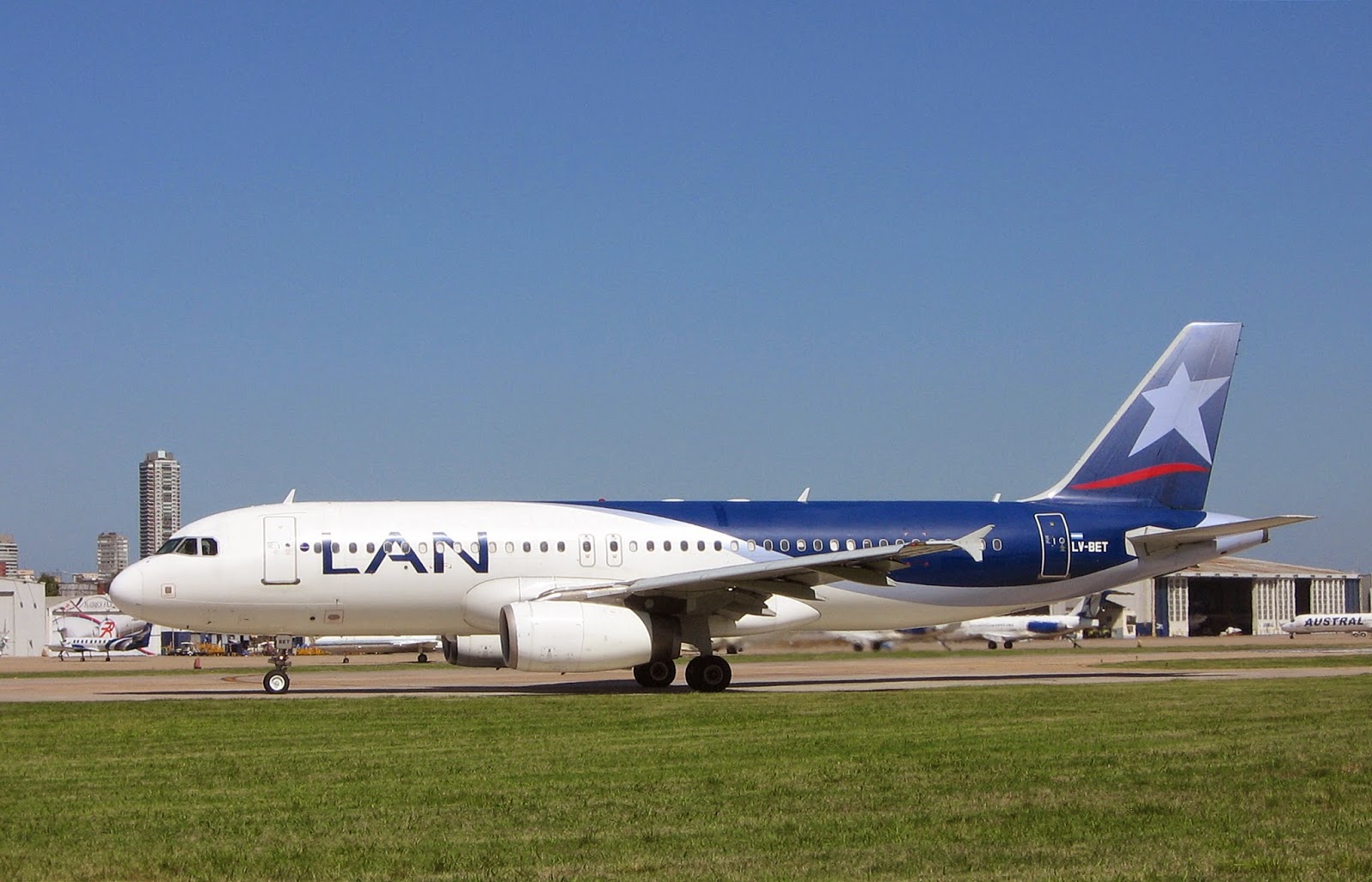 The Uruguayan airline claims that it is not in economic difficulties, yet it failed to pay other airlines for tickets that it endorsed to them when it canceled flights and needed to reroute passengers on said airlines.  BQB has said that these payments, which are routed through the IATA (International Air Transport Association) clearinghouse, will resume normally soon.  The airline claims to be in good financial health with assets of US$ 70 million, which a BQB spokesperson compared favorably to Alas U, which would be financed through a debt of US$ 15 million on the day it starts operations should it ever do so.

BQB has been flying to many Brazilian destinations and this is the first I have heard of them being denied any routes to its much larger neighbor to the north. This is also the first I have read about BQB applying for routes to Cordoba (COR) and Rosario (ROS).

These doubtful claims plus the carrier's failure to pay other airlines through the IATA clearinghouse would seem to indicate that BQB might be having financial problems in spite of its claims to have US$ 70 million in assets and being owned by the very successful Buquebus ferry company.

The aircraft, owned by lessor Aviation Capital Group, will be Aerolineas' 12th 737-800 and 34th 737NG once it is delivered to the Argentine national airline.

Photos and video of the aircraft by Tom Sheehan in green primer paint and Aerolineas colors rudder and winglets: 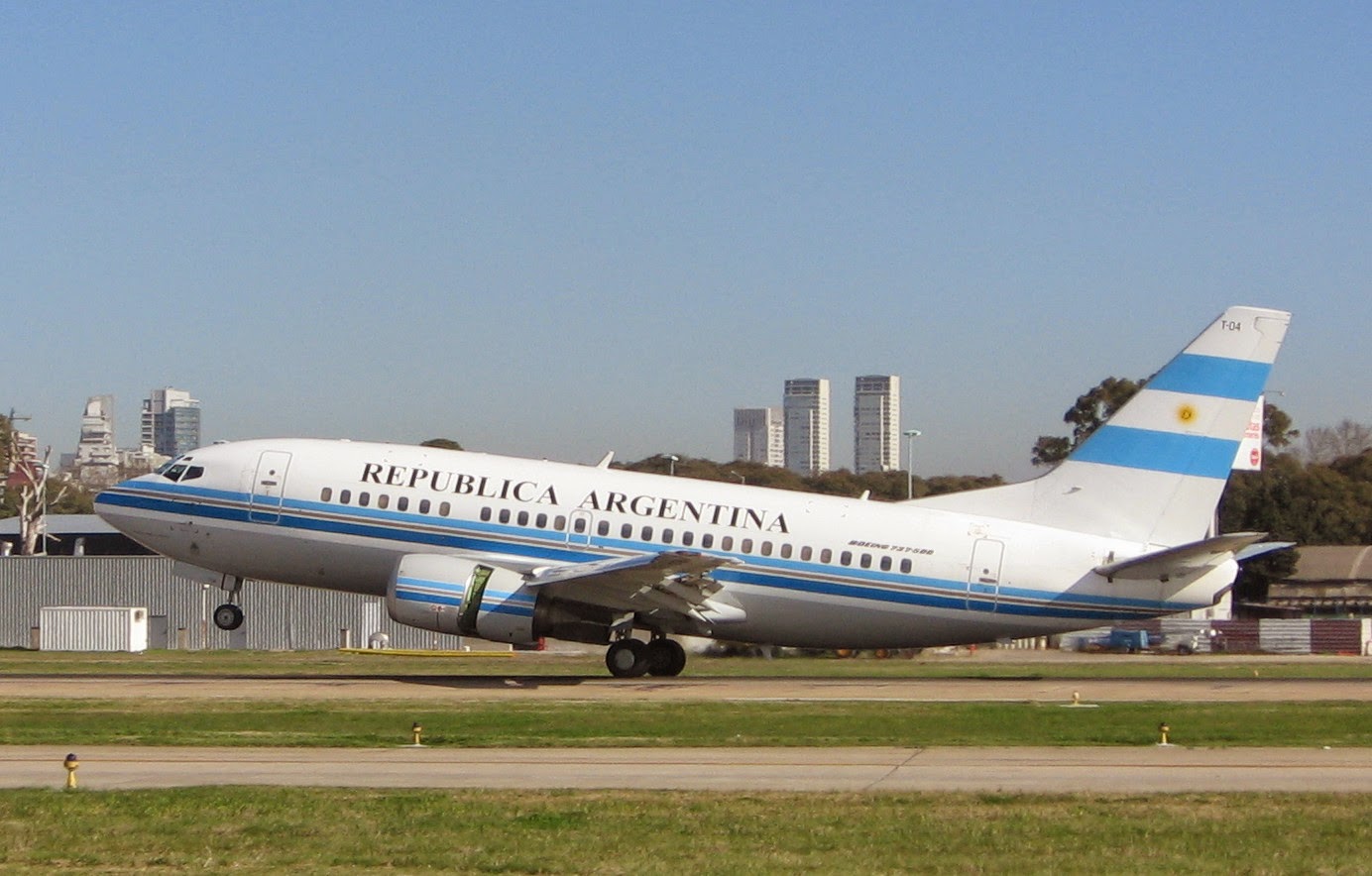 Republica Argentina 737-5H6, T-04, (c/n 26456/2527) lands at Buenos Aires Aeroparque (AEP) on 15Aug14.  Note that the thrust reversers were deployed even before the nosewheel touched the ground, not a rare occurence but not very common either. (Phil Perry Photo) 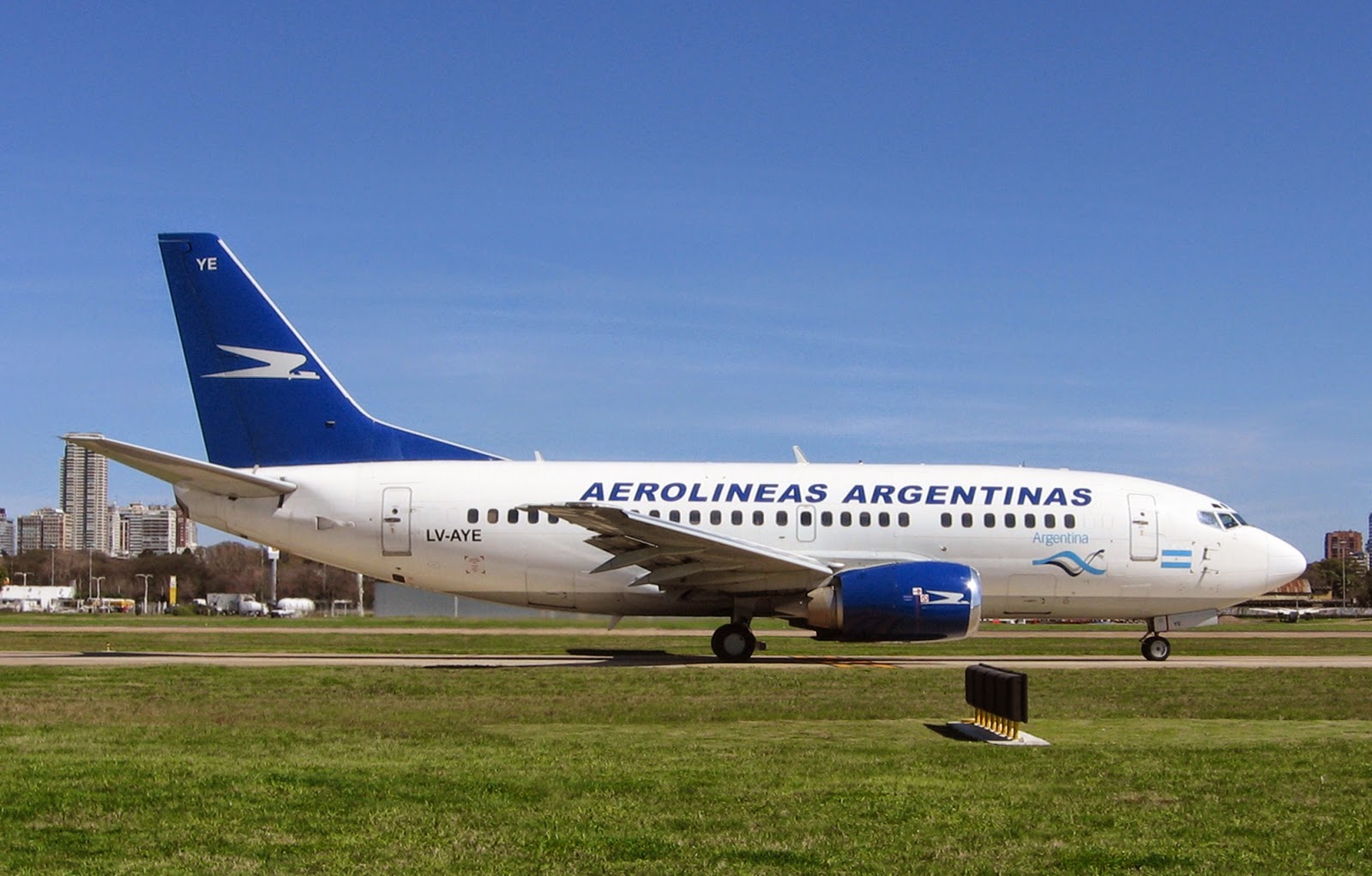 The same aircraft as Aerolineas Argentinas LV-AYE taxiing out for a flight at Aeroparque on 18Sep10.  (Phil Perry Photo)

The aircraft was originally delivered to Malaysian Airlines on 29Sep93 as 9M-MFF and served briefly with Jet Airways in 1998 before joining Air France as F-GJNY on 10Dec99.  The 737-500 finally went to Aerolineas Argentinas on 11Oct04 as LV-AYE where it flew until 29Mar12 when it was ferried to San Juan (UAQ) in northwestern Argentina for storage the following month.  On 18Dec12 it was ferried to Buenos Aires Ezeiza (EZE) where it was stored in a hangar until recently.

Aerolineas was due to return LV-AYE to its owner, lessor GECAS, but the cost of work necessary on the airframe prior to its return, including a major check, exceeded the value of the aircraft itself, estimated at US$ 1.75 million, so GECAS agreed to sell the plane to Aerolineas.

The cost to the Argentine government of preparing the aircraft for its new role was apparently US$ 3 million, including installing a new interior with three sections; a VIP cabin for the president, another area for government ministers plus 54 seats for other travelers.  Seats from ex-Aerolineas 737-287 LV-JTD (c/n 20523/285) which served briefly as an executive charter aircraft, were reportedly used for at least some of the conversion.

The 737-500, still wearing registration LV-AYE, performed test flights from EZE on 16Apr14 and 23Apr14, entering a hangar at EZE soon thereafter for the conversion to the VIP interior.

By 08May14 painting of the aircraft in the "Republica Argentina" colors was complete.  It was still wearing the LV-AYE registration but its new "T-04" air force designation was reportedly applied in early June.

Indeed, the editors of Linea ALA have commented that it is surprising that other retired Aerolineas Argentinas 737-500's were not used to replace the numerous aging Fokker F.28's of the Argentine Air Force, Navy and Presidential Flight.  According to Linea ALA, it would have been "coherent and appropriate in economic and operational terms".

80,000 Argentines traveled to Brazil during the month of the World Cup

During the month of the World Cup, 80,000 Argentines traveled to Brazil with Aerolineas Argentinas carrying some 30,000 of these passengers on its regularly scheduled flights plus 92 charters and Andes Lineas Aereas accounting for 9,000 travelers on 32 charters.

Much of Aerolineas' extra capacity was achieved by substituting 737NG's for many of the Embraer 190's that are normally scheduled to Brazil with the 190's being redeployed to other routes which had reduced demand due to its being low season and the World Cup itself.

The FONDES Uruguayan government development fund granted Alas Uruguay, the airline being started by former PLUNA employees, US$ 780,000 of the US$ 15 million credit line approved to assist the carrier establish a viable operation. Alas Uruguay will lease three 737-300's from Jet Trading & Leasing of the United States for US$ 65,000 each per month but needs to put down a deposit equal to three months of lease payments to initiate the transaction.

Editor's Comment:  Alas Uruguay's route plans nearly duplicate BQB's past, current and future route aspirations. Given the flights being added on many of these routes by traditional and powerful network airlines, such as TAM, it seems doubtful that one, never mind two carriers, could operate many of them profitably.

Aerolineas Argentinas has used the end of a closed runway at Buenos Aires Ezeiza (EZE) for storage of retired aircraft for several years with nine 737-200's and six 747-287B's currently parked there.

Most of the following 737's are believed to be among the nine in the photo:

BQB Lineas Aereas laid off / made redundant 55 workers last week, apparently due to Argentina route applications that it made being denied by the Argentine government.  The personnel losing their jobs are mostly flight and cabin crew that were to be deployed on new routes, such as to Cordoba (COR).

The Uruguayan airline is reportedly also cancelling a lease on an A319 but it is not clear if that is in reference to the sole A319 currently in its fleet or one that was due to arrive later this year.

The claim that the layoffs are due to Argentina route denials seems doubtful because this is the first that I have heard in at least a couple of years of BQB aspiring to fly to Argentine points beyond Buenos Aires. Also, PLUNA's failure was due in large part to its inability to gain route rights from Argentina that would have enabled the carrier to feed its six Brazilian destinations out of Montevideo (MVD).  It is hard to believe that BQB expected to be approved for the same routes that were denied to PLUNA.

It sounds more like some of BQB's routes have not been as successful as the carrier would have liked, maybe due to slow economic growth in the "Southern Cone" countries and Brazil as Aviacion News pointed out in its 31Jul14 issue, so the carrier is simply scaling back growth to meet demand.

Former Aerolineas Argentinas 737-236A, LV-ZYG, (c/n 21795/645) was recently painted in a fictitious "Sudamerican Airlines" scheme to appear in an episode of the Argentine TV show "Showmatch" run by Marcelo Tinelli.

The aircraft was retired from Aerolineas service in March 2009 and was later painted in the carrier's newest colors for display at the "Tecnopolis" technological fair.  These colors were modified with orange and the "Aerolineas Argentinas" titles replaced with "Sudamerican Airlines" titles.

Photos taken in early May 2014 at Moron Airport:

Former Aerolineas Argentinas 737-236, LV-ZYG, that was displayed at "Tecnopolis" Fair was moved to Moron Airport & Air Base

Former Aerolineas Argentinas 737-236, LV-ZYG, (c/n 21795/645), the sole Aerolineas 737-200 to be painted in the carrier's newest colors (long after it was retired from service) was recently moved from its display position at the "Tecnopolis" technological fair just north of Buenos Aires to the Moron Airport & Air Base, location of the Argentine National Aviation Museum.  The aircraft's titles were painted over and wings and entire tail assembly removed prior to towing on its own wheels to Moron on 05Apr14.

Once the 737-200 arrived at Moron, it was transferred to the area previously occupied by the now-defunct carrier CATA where it was reassembled to be used in a television show by the popular Argentine TV host Marcelo Tinelli. One would have hoped that the aircraft would be displayed at the museum once the filming was over but Aerolineas Argentinas put the plane up for sale in late June.

LV-ZYG was first delivered to British Airways on 20Mar80 as G-BGDF where it flew until early 2001 before joining Aerolineas Argentinas on 20Nov01.  It was retired from service and stored in March 2009.

Aerolineas Argentinas recently put up for sale several of its retired 737-200's and 747-200's.  The airline has more than a dozen such aircraft parked at Buenos Aires Ezeiza (EZE) and other locations with most apparently being too derelict to fly again.  The examples being offered for sale are presumably airworthy or can at least be used for spare parts.

Aircraft were available for viewing at Buenos Aires Ezeiza (EZE) between 30Jun14 and 04Jul14 with offers being accepted at Aerolineas' headquarters until 14Jul14.

The specific aircraft are:

LV-ZYG 737-236 (c/n 21795/645) delivered to British Airways on 20Mar80 and joined AR on 20Nov01.  This is the same aircraft that was painted in Aerolineas Argentinas' newest colors, displayed in the Tecnopolis technological fair, moved to the Moron Airport & Air Base and painted in a modified scheme with "Sudamerican Airlines" titles for a TV show.