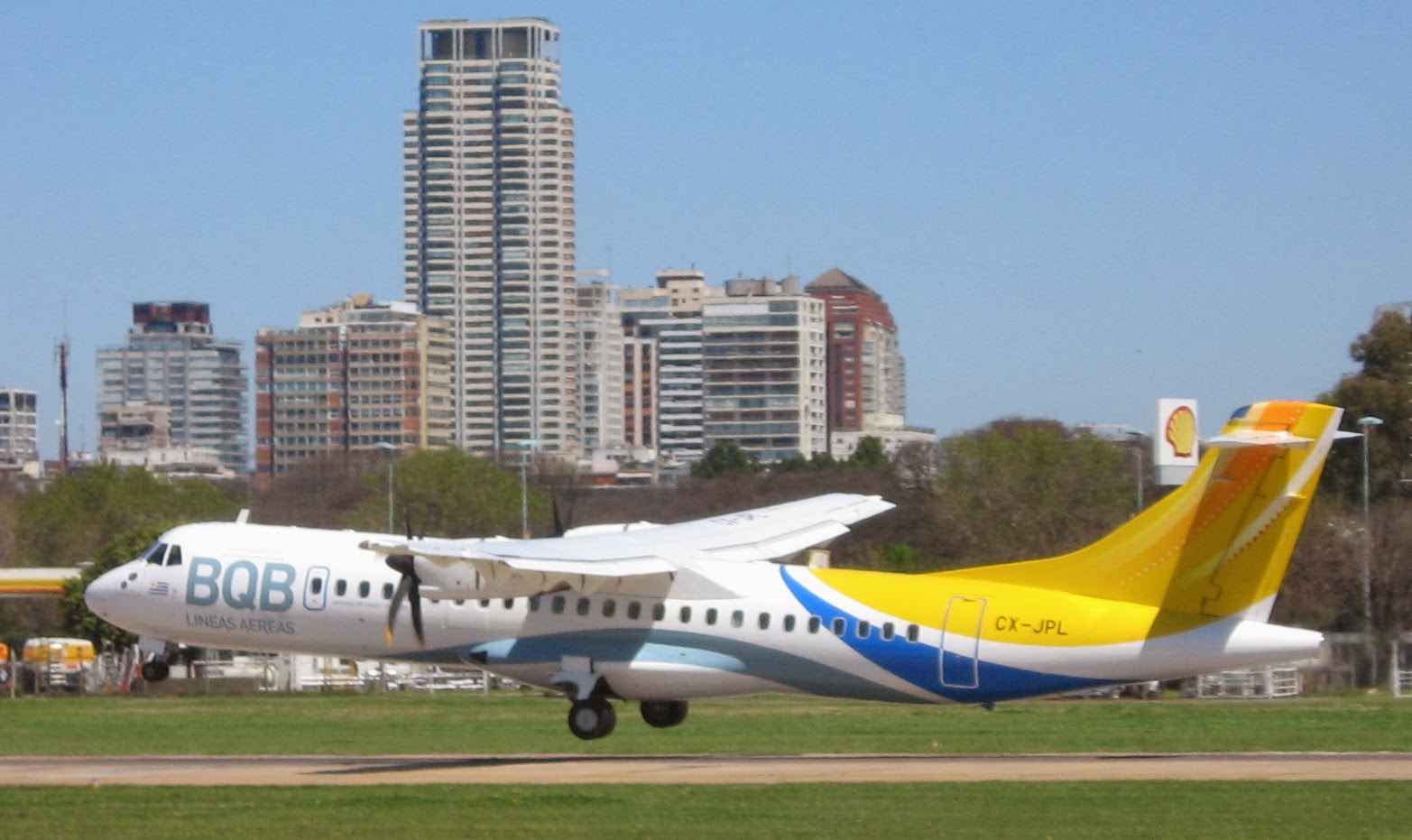 BQB's ATR-72-500's and soon-to-be-delivered A319's will be busy this southern hemisphere winter flying their regular schedules plus a lot of World Cup charters.  Above is BQB ATR-72-500 CX-JPL taking off at Buenos Aires Aeroparque (AEP) on 11Oct10.  (Phil Perry Photo)

BQB Lineas Aereas of Uruguay will operate a total of 42 charter flights and extra sections (21 round-trips) from Montevideo (MVD) and Santiago (SCL) to Brazil for fans to attend Argentina, Brazil and Uruguay World Cup "Group Round" matches plus some "Second Stage" and playoff round matches as well.

Only 2 of the round-trips will be operated from Santiago (SCL), both with A319's.

From Santiago, BQB will fly their A319's to Sao Paulo Viracopos (VCP) and Cuiaba (CGB).

Some of the ATR-72 flights will be very long, especially to Belo Horizonte (CNF) and Brasilia (BSB) which could be in excess of five hours !  Most of the flights are being sold as same-day round-trips so there should be little luggage on the planes and less weight allowing for more range.  On the other hand, the aircraft should be full with most of the passengers being male so that might result in unscheduled fuel stops !

For full details on all the individual flights, please click on the "Source" below:

Will reintroduce Cordoba (COR) - Sao Paulo Guarulhos (GRU) service after a six-year absence on the route.  The service will be operated daily with A320's.

Currently TAM's operations between Argentina and Brazil consist of:

Austral Lineas Aereas - Effective ?
Will increase service on the Buenos Aires Aeroparque (AEP) - Esquel (EQS) route from 2x/weekly to 3x/weekly with flights to be operated with the carrier's E-190's.

Alas Uruguay is continuing with its plans to start service with three leased 737-300's this year.

Senior officials of the airline being formed by a group of former PLUNA employees met with the Uruguayan senate on 19Mar14 seeking support for the carrier's business plan.  Most of the plan was held in confidence but the Uruguayan newspaper El Observador was able to learn some of the details:

Keys to the start of service are:

1) Approval of a pending credit from the FONDES (Uruguayan government development fund) of US$ 15 million.

This last condition is highly doubtful, especially because the airline is seeking two early morning slots, one at mid-day, and two more in the evening, all of which are currently held either by Aerolineas Argentinas or BQB Lineas Aereas. The Argentine government is likely to prioritize the interests of the state-owned Argentine carrier and not cede any slots to Alas Uruguay beyond those currently operated by BQB, which is also a Uruguayan airline.

BQB Lineas Aereas is part of a larger transportation group that includes the Buquebus ferry lines and controls 75% of the total available space for passengers traveling between Argentina and Uruguay by air or sea.  Alas Uruguay senior officials clearly expect that BQB will give up some of its better slots between MVD-AEP but the latter only operates 2x/daily on the route so it has little, if anything, to give to the newly-forming airline.

Beyond the Montevideo - Buenos Aires "Air Bridge", Alas Uruguay is planning a "hub-and-spoke" system similar to the network that PLUNA had assembled at the time of its demise, using Montevideo (MVD) as a hub connecting to different points in Argentina, Brazil, Chile and Paraguay. The carrier aspires to operate as something of an LCC with lower wages than average for the region and 25% of salaries going towards helping capitalize the airline.

A total of 70 weekly flights would be operated.  The airline forecasts first-year operating losses of US$ 2.84 million but second-year profits of US$ 13.49 million.  Alas Uruguay's management further claims a financial benefit to Uruguay of US$ 79 million per year with US$ 60 million coming from a forecast of 100,000 new tourists annually and the rest coming from savings to the government of the unemployment insurance it is currently paying the employees, new tax collections, and the value of products and services that the carrier would consume. 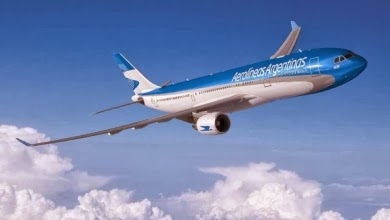 Sol Lineas Aereas gets 15-20% of Bookings through Code-Share with Aerolineas Argentinas; Looks to acquire ATR-42's or ATR-72's

Sol Lineas Aereas, the small Rosario, Argentina-based regional carrier with a fleet of six Saab 340A/B's, has been code-sharing with Aerolineas Argentinas since August 2013, mostly on less-traveled regional routes but also on some more important sectors also flown by Aerolineas.  The code-share agreement has been successful for Sol with 15-20% of its bookings being generated by Aerolineas' reservations.

Sol was looking to acquire CRJ-200's from Spanish carrier Air Nostrum last year but the operation of jet equipment was seen as a threat to Aerolineas so Sol is now considering the acquisition of ATR-42's or even ATR-72's, although even the smaller ATR would represent a 40% increase in capacity over the Saab 340's.

Aerolineas Argentinas' 2014 Brazil World Cup charter plans include nine charters to the three first round games that the Argentine national team will play; against Bosnia & Herzegovina in Rio de Janeiro on 15Jun14, Iran in Belo Horizonte on 21Jun14, and Nigeria in Porto Alegre on 25Jun14.  The airline will presumably fly additional charters if Argentina qualifies for the second round, which given its first round rivals, would be a national disaster if they didn't !

With the number of Argentines interested in traveling to the World Cup, the airline might very well operate their A330's, and A340-200's and 300's to airports where they normally never go so spotters, be on the lookout ! 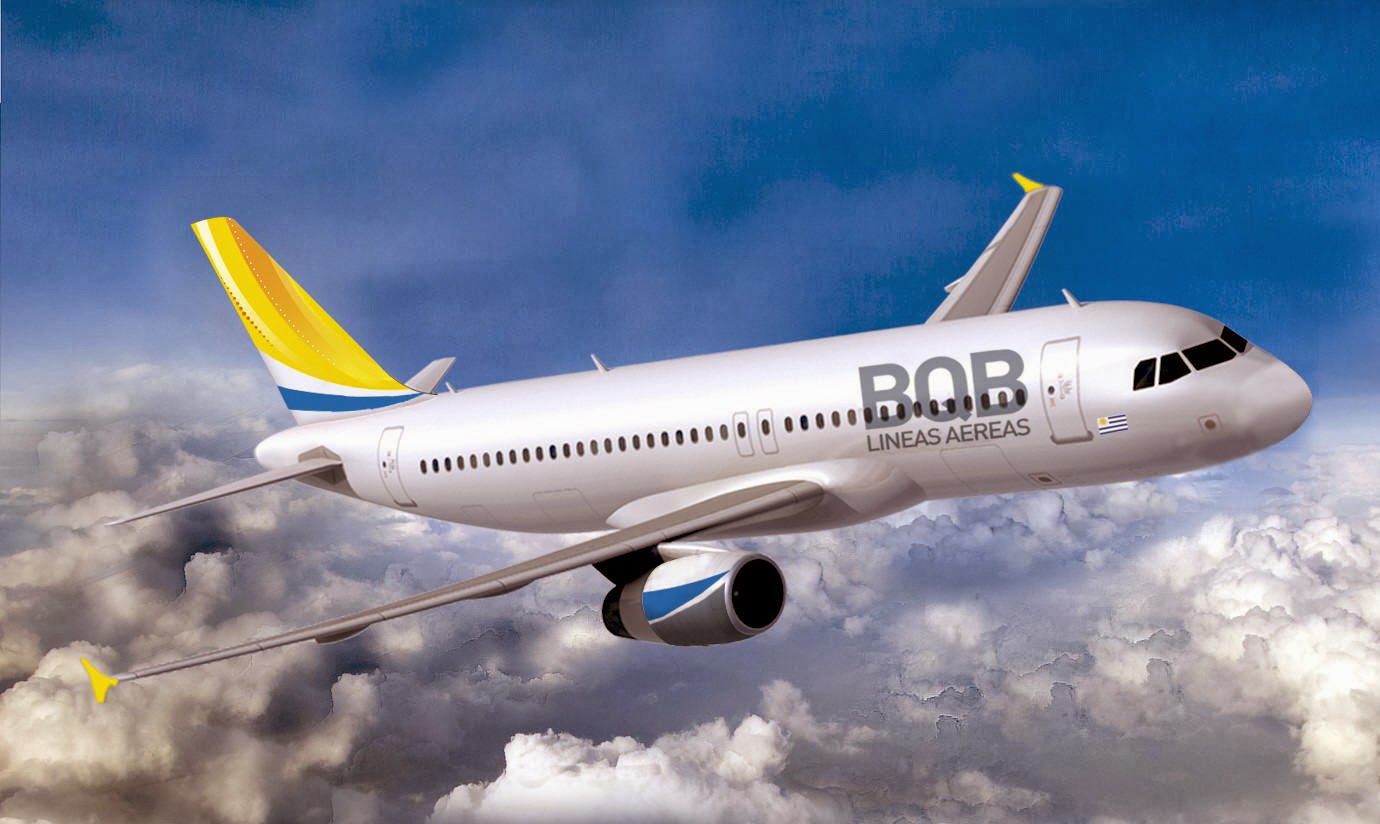 The others to be delivered are:

This last one ought to cause some amusement in English-speaking countries !

The Salta-based airline was scheduled to increase its MD-80 service from Buenos Aires Aeroparque (AEP) to Puerto Madryn (PMY) on the Patagonian Atlantic coast from 3x/weekly to 5x/weekly in mid-February.

The government of the province of Chubut, where Puerto Madryn is located, agreed to pay a portion of the carrier's fuel costs on the route in return for free tickets for government employees traveling on business. More importantly, Puerto Madryn is a major destination for nature tourism, especially whale-watching, and it needs convenient flights to assure air connectivity for tourists.

Extended its 3x/weekly Amsterdam (AMS) - Buenos Aires Ezeiza (EZE) service to Santiago (SCL) for the first time since 2000 when the carrier dropped the route due to a restructuring of its long-haul flights.

The airline, which operates 777-300's on the route, has "Fifth-Freedom" rights to sell tickets between EZE and SCL and vice versa.  "Fifth Freedom" refers to an airline from one country selling tickets on flights between two other countries.

Similar "Fifth Freedom" rights are exercised by Air Canada, also between EZE and SCL, Emirates and Qatar between EZE and Sao Paulo Guarulhos (GRU), and Air France between EZE and Montevideo (MVD) offering passengers some interesting choices when flying between these cities.
Aerolineas Argentinas - Effective 02Mar14

Will convert its 1x/weekly Buenos Aires Ezeiza (EZE) - Cancun (CUN) flights from charters to regularly scheduled service with the flights increasing to 3x/weekly, all operated with A340's on 04Jul14.

Apparently, the main reason for the conversion is the non-renewal of the contracts between the airline and tour operators that packaged the destination due to a 32% drop in travelers in December alone.  This is probably because of the increasing difficulty to buy U.S. dollars in Argentina for foreign travel.  As a result, one would question how well the scheduled service will do.

This authority will be put to use in June when BQB operates charters using newly-delivered A319's from Santiago (SCL) to Cuiaba (CGB) and Sao Paulo Viracopos (VCP) for Chilean World Cup games in Brazil.

Email ThisBlogThis!Share to TwitterShare to FacebookShare to Pinterest
Labels: A319, BQB Lineas Aereas

Both aircraft are factory-new.