BQB Lineas Aereas will reportedly add the first A320 to its fleet during the fourth quarter 2013.  The airline was previously rumored to be adding jet aircraft to its fleet in the first quarter of this year but those plans were not realized.  BQB was also supposed to start flying from Montevideo (MVD) to Madrid (MAD) in April with a leased 767-300 but those plans were shelved when Air Europe started to fly the route instead.

The A320 is planned for daily flights from Montevideo to Santiago (SCL) and Sao Paulo - Guarulhos (GRU) plus weekly service to Rio de Janeiro Galeao (GIG) and Isla Margarita (PMV), off the Venezuelan coast.

In September, the airline is supposed to add a fourth ATR-72-500 to its fleet to enable new service to Curitiba, Brazil (CWB), Santa Cruz de la Sierra, Bolivia (VVI), Ciudad de Este, Paraguay (AGT) and Rivera, Uruguay (RVY).  Service by BQB to these cities has been rumored ever since the demise of PLUNA a year ago, especially Rivera, where the start of service has seemed imminent for the last six months.

Aerolineas Argentinas has agreed to lease 11 737-800's from three different sources for delivery over the next three years bringing its total fleet of the type to 15 examples.

The largest contract is with Air Lease Corporation for six new 737-800's to be handed over between November 2014 and February 2016 on 12-year leases.

Additionally, four new 737-800's leased from CIT Aerospace are due for delivery starting in January 2014.

One more 737-800, an ex-Air Berlin example, is due to be delivered by AWAS in November of this year.

The first A330-200 to be delivered to Aerolineas Argentinas on lease from ILFC, an ex-Malaysia Airlines airframe, has been spotted at Kuala Lumpur International Airport painted in the Argentine airline's new colors. 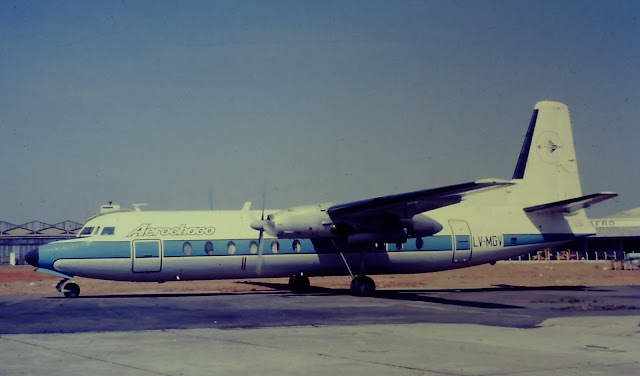 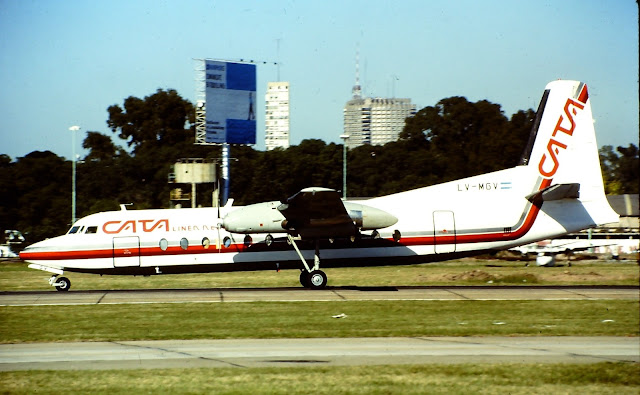 Shots of Fairchild FH-227B, LV-MGV, c/n 567, in service with the original Aerochaco at an unknown location, probably in the late 1970's or early 1980's and with CATA Linea Aerea at Buenos Aires Aeroparque (AEP) in the 1990's or early 2000's. (Both photos Phil Perry collection)

Aerochaco operated from its Resistencia, Chaco base, some 600 miles north of Buenos Aires, to several cities in northern Argentina from 1959 until at least 1984.

The pictured aircraft was delivered to Paraense of Brazil in 1967 and went on to fly for AeroChaco in 1978, Aeroposta, ALFA (Aerolineas Federales Argentinas) and CATA which it joined in 1997.

Sadly, on 26Oct03 the aircraft crashed soon after taking off from Buenos Aires Ezeiza (EZE) on an early morning cargo flight heading to Corrientes (CNQ).  Cause of the accident was an engine failure soon after takeoff and possible excess weight.  Five crew members lost their lives.  Link to the accident report: 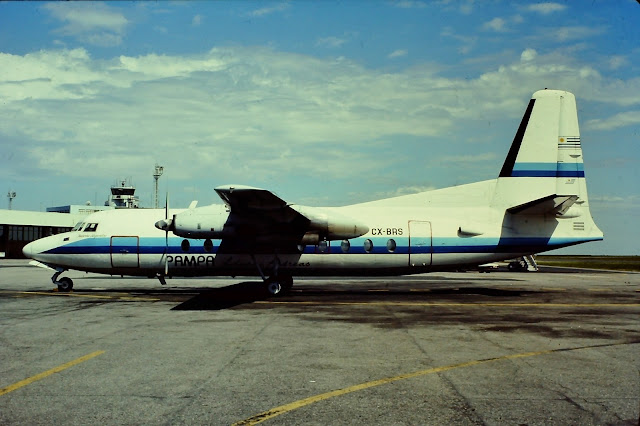 Pampa Lineas Aereas F-27, CX-BRS, c/n 27, was shot at Montevideo (MVD), presumably around 1996 when in service with the airline, and was a very early example of this type having been manufactured in 1958.  (Phil Perry collection)