Aerolineas Argentinas took delivery of no fewer than four factory-fresh 737-800's from Boeing in August.

Next up was 737-8MB, LV-FXQ (c/n 43881/5539), leased from ICBC Financial Leasing, a branch of the Chinese bank, which was delivered on 19Aug15 but flew from Boeing Field to San Salvador (SAL) without immediately continuing to Argentina because the aircraft is undergoing modification work to its passenger cabin at the Salvadoran airport.

Aerolineas next took delivery of 737-8MB, LV-FYK (c/n 43882/5546), leased from Air Lease Corporation, on 26Aug15 but it also stopped in San Salvador (SAL) for modifications where it is currently. 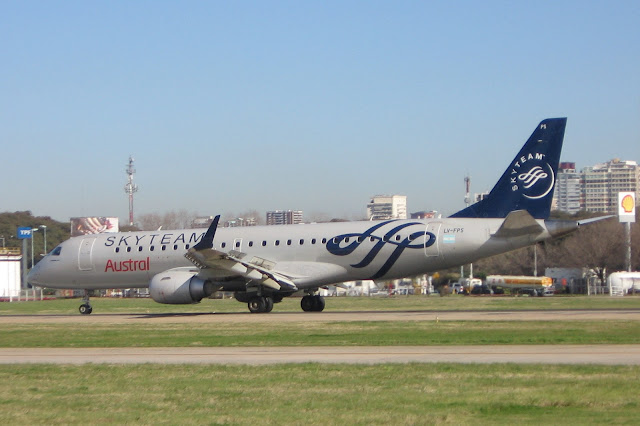 Austral Lineas Aereas will reportedly take delivery of two Republic Airways' ERJ-190's as they come off lease with the US regional carrier in the coming months. Republic is looking to dispose of the six ERJ-190's in its fleet and standardize on the ERJ-170 of which it currently has 112 in service. 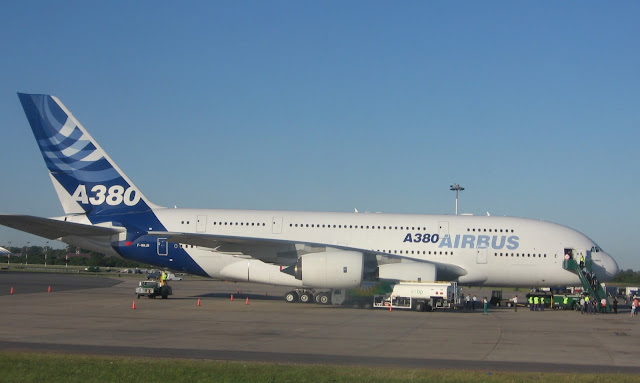 The editor of this blog happened to fly from Montevideo (MVD) to Buenos Aires Ezeiza (EZE) on the second day of what appears to have been the giant aircraft's first visit to Argentina.  The A380 arrived at EZE on 08Dec07 coming from Sydney (SYD) as part of a world sales tour.

The new service is being launched with the help of a marketing agreement with the Conrad Punta del Este resort, casino and convention center, the Uruguayan resort destination's highest profile entertainment and lodging facility.  The promise of the new flight is that passengers from all over TAM's network will have easy access to Punta del Este through TAM's Sao Paulo Guarulhos' hub. Main points of origination will likely be airports from nearly all of TAM's network, including Brazil from Porto Alegre north, the Americas from Peru all the way to the USA plus Europe.

TAM will presumably codeshare at some point with other airlines from the Oneworld airline alliance through its GRU hub, such as British Airways from London and possibly other European airports too, extending access to Punta del Este to many points worldwide.

Aerolineas Argentinas reintroduced Cordoba (COR) - Miami (MIA) service on 04Jul15 to be operated on Saturdays and Sundays with A340-300's, although A330's have been schedule on the route on Sundays for two months between July and September.  The airline last flew between the two cities 4x/weekly with 747-200's in January 1999.

Aerolineas Argentinas / Austral are also operating flights between Mendoza (MDZ) and Cordoba (COR) to connect with the Miami (MIA) flights in both directions using Embraer 190's and 737-800's.

With this new service Aerolineas will have 16 weekly flights between Argentina and Miami (MIA), 14 from Buenos Aires Ezeiza (EZE) and 2 from Cordoba (COR).

Sol Lineas Aereas recently signed an expanded codeshare agreement with Aerolineas Argentinas and Austral to cover routes that do not have enough traffic to economically operate the 737-700's, 737-800's and ERJ-190's flown by these two carriers.  Aerolineas Argentinas / Austral will reportedly be in charge of the sales and marketing of tickets with revenue accruing to the two carriers while Sol gets paid a flat fee by them to operate the codeshares.

The agreement is due to take effect on September 1 and will apparently see the carrier abandon its current short-range regional route network flown by Saab 340's in favor of becoming a pure codeshare operation.  Sol's current fleet of four 34-seat turboprop Saab 340's, two "A" and two "B" models, are designed for short to medium range flights of up to about 400 miles / 650 km and are not suitable to operate on the longer-distance legs flown by the longer-range and greater capacity jets flown by AR /AU so Sol will reportedly replace its Saabs with six 50-seat CRJ-200 regional jets from Spanish regional carrier Air Nostrum with the first airframe due to arrive in early October, the second in November, two more in January, and the last two in March 2016.  Air Nostrum currently has a fleet of 44 aircraft; 5 ATR-72-600's, 3 CRJ-100's, 15 CRJ-200's (seven of which are in storage), 11 CRJ-900's and 10 CRJ-1000's and is looking to dispose of its CRJ-200's in favor of more CRJ-900's.

The agreement between Sol and Air Nostrum is reportedly a lease with an option to buy and includes technical support from the Spanish carrier.  Sol flight crews are said to be already undergoing simulator training with flight dispatchers to start training soon too.

BQB Lineas Aereas never operated the A319, CX-SAN (c/n 1703) that it took delivery and had possession of for six months in 2014.  The Uruguayan aviation authority, DINACIA, never authorized its use, presumably due to a lengthy certification process, but possibly due to political conflicts between the Uruguayan government and Juan Carlos Lopez Mena, owner of BQB, stemming from his role in the failed 2012 auction of PLUNA's CRJ-900's.

The Uruguayan website, Portal de America, claims that BQB's ATR-72-500's had several emergency landings in the last few months that the airline was in service and that this prompted the DINACIA to withhold certification of the A319.  The Spanish aviation magazine, Avion Revue, also claimed in its June 2015 issue that BQB's ATR-72-500's had numerous emergency landings but this might simply have been a repetition of the Portal de America claim.

Bariloche annually draws thousands of Argentine graduating high school students, most of whom take very long bus rides, such as 20-24 hours from Buenos Aires, to arrive at the resort.  To alleviate the situation and make Bariloche tour packages more attractive, Travel Rock is offering students nonstop charter flights on Andes MD-80's from secondary Argentine cities, such as Cordoba (COR), Iguazu (IGR), La Rioja (IRJ), Mar del Plata (MDQ), Posadas (PSS), Rio Cuarto (RCU), Rosario (ROS), Salta (SLA), Santiago del Estero (SDE) and others for an average 500 peso surcharge (US$ 55 at the official exchange rate) over ordinary charter bus travel to Bariloche. The charters started in July and are due to operate through the rest of the year.

To celebrate and publicize this new service, on August 10 Andes rolled out its MD-83 LV-WGM (c/n 49784/1627) painted with billboard Travel Rock titles on the fuselage topped by "The largest company of graduate travel in the world" in Spanish in small cursive letters plus company logos on the tail and near the nose.  These photos by Rafael Reca and published in the Argentine aviation blog Linea ALA detail the new logojet scheme: 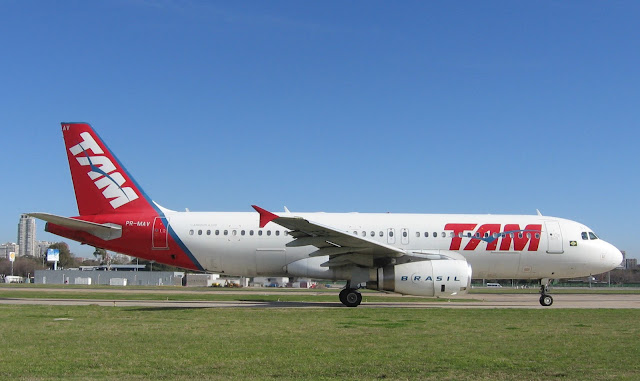 There has been a lot of new service added between Argentina and Brazil lately by both Gol and TAM, which added to flights by Aerolineas Argentinas and Austral add up to connectivity between the two countries many times over what existed just a few years ago.

One of the most recent new flights has been added by TAM from Buenos Aires Ezeiza (EZE) to Brasilia (BSB) 4x/weekly using A320's, effective 03Jul15.  This new service connects through TAM's Brasilia hub to five points in northeast Brazil, including 4x/weekly flights to Fortaleza (FOR), 7 to Maceio (MCZ), 4 to Natal (NAT), 4 to Recife (REC) and 4 to Salvador (SSA). 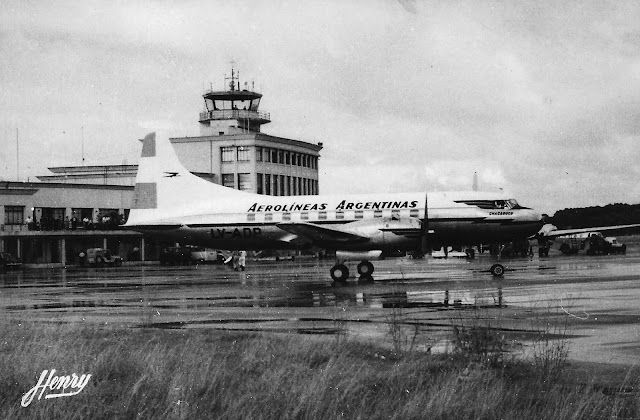 This aircraft has an interesting history in that it was originally built for Flota Aerea Mercante Argentina, one of Aerolineas Argentinas' predecessor airlines, in 1949 and was even painted in the carrier's colors, but was apparently never delivered to FAMA due to lack of payment. Reassigned to ZONDA, another one of the four airlines that eventually merged to form Aerolineas, it was never operated by that airline either due to the merging of FAMA, ZONDA, ALFA and Aeroposta Argentina to form Aerolineas Argentinas on 14May49.

"Chacabuco" went on to fly for Aerolineas experiencing two incidents in Cordoba (COR) in 1952 and Buenos Aires Aeroparque (AEP) in 1957.  The aircraft went on to the Fuerza Aerea Paraguaya and Lineas Aereas Paraguayas as T-47 and ZP-CDP, respectively, in March 1963.  On 26May67, while flying for these operators, its left wing became detached upon contact with the ground while landing at Buenos Aires Ezeiza (EZE) resulting in the aircraft flipping and turning on its back. Fortunately, there were no casualties despite the apparent seriousness of the accident.

Some rare photos of the aircraft in FAMA colors and resting on its back after the accident at EZE:

Amaszonas bought the Uruguayan airline BQB Lineas Aereas in May 2015 but it is unclear what the Bolivian carrier actually obtained in the deal.

At first, it appeared that BQB's Airline Operator Certificate (AOC) was part of the agreement but subsequent information appears to suggest that Amaszonas' purchase from BQB's parent company Los Cipreses S.A. only included the BQB brand name, limiting Amaszonas' ability to take over BQB's operations.

The Uruguayan travel/aviation website, Portal de America, reports that one of the principal problems has been that BQB's AOC was issued with authorization for the carrier to operate ATR-72-500's but Amaszonas' operates a completely different type, CRJ-200 regional jets, which would require the Bolivian airline to go through an authorization process for this type with the Uruguayan DINACIA aviation authority before it could put them into service on former BQB routes, but that is assuming that Amaszonas did indeed purchase BQB's operating certificate and not just the BQB brand name !

The end result of whatever Amaszonas actually purchased is that the airline has yet to start service on BQB's most important and profitable former route; Montevideo (MVD) - Buenos Aires Aeroparque (AEP).  Portal de America claimed in May that Amaszonas never even requested rights for this route from the Argentine aviation authorities but Aviacion News quotes the Uruguayan Tourism Minister Liliam Kechichian as saying that Argentina has denied Amaszonas permission to fly from Montevideo to Aeroparque as it has with so many other foreign airlines seeking to fly to Argentina.

Alas Uruguay continues the process of obtaining its airline operating certificate, which it began in July 2014 and was originally expected to take six months but has now surpassed a year.  One of the problems encountered by the planned start-up carrier was missing documentation for one of the engines of its first 737-300, CX-OAA (c/n 28569/2996).  This engine, in turn, was due to be replaced with another one in early August.  Certification of the airline is expected in the next month or two but certification has been imminent for several months now.

In the meantime, the airline took delivery of its second 737-300, CX-OAB (c/n 28869/2887) on 02Jul15.  Like CX-OAA, CX-OAB is leased from Irish lessor Aergo Capital and previously flew for Air Ukraine.  Alas Uruguay's third 737-300, leased from Cara Capital of Deerfield Beach, Florida and expected to be registered CX-OAC, is currently being painted in the Uruguayan airline's colors in Tucson, Arizona with its tentative arrival in Montevideo (MVD) scheduled for mid-August.

Alas Uruguay recently announced the routes that it plans to fly initially, without giving specific start dates, as follows:

While the airline hopes to start these services soon after certification, Portal de America reports that route permissions from the Paraguayan authorities should take approx. 30 days, the Chileans 45 days and Brazilians 90-120 days.  And the Argentine aviation agency has approved few new route requests at all during the last few years (although more have been approved lately, especially from Brazilian airlines).

The best photo that the editor of this blog has seen yet of Alas Uruguay 737-300, CX-OAA is the following from World Airline News: