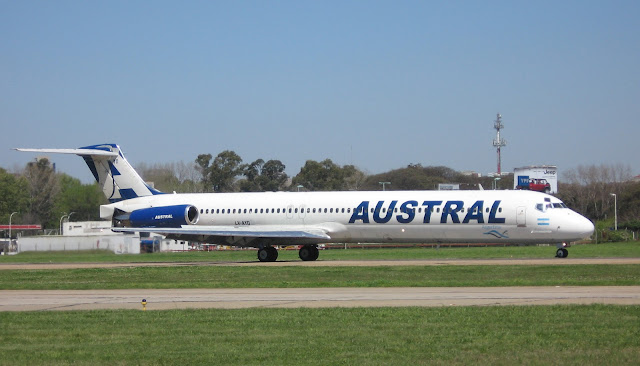 Aerolineas Argentinas recently took delivery of two 737-700's from ILFC (International Lease Finance Corporation), LV-CXN (msn 30638) and LV-CYJ (msn 30647).  Both aircraft are approximately 10 years old and were previously operated by Virgin Australia.  They are the seventh and eighth aircraft of a 10-plane order from the aircraft lessor and 21st and 22nd 737-700's to join Aerolineas' fleet since 2009.   The two remaining planes from ILFC, LV-CYN and VH-VBL are expected to arrive in the coming weeks.

Part 2 features aircraft from the fleets of Azul, Trip and Avianca Brasil.  All photos were taken as the aircraft were about to land or take off from runway 02R on Monday, 13Aug12. 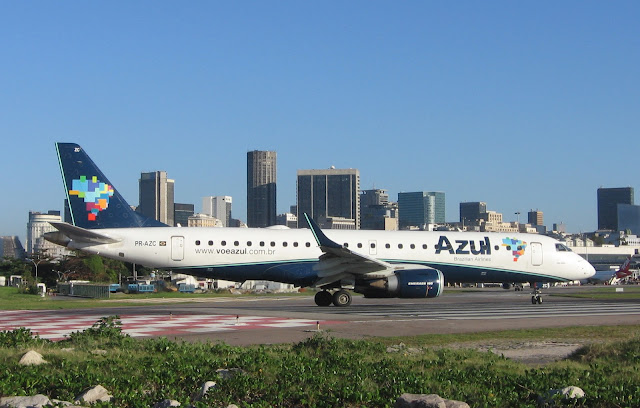 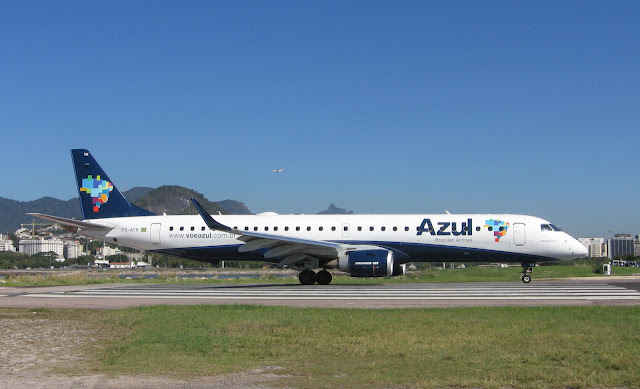 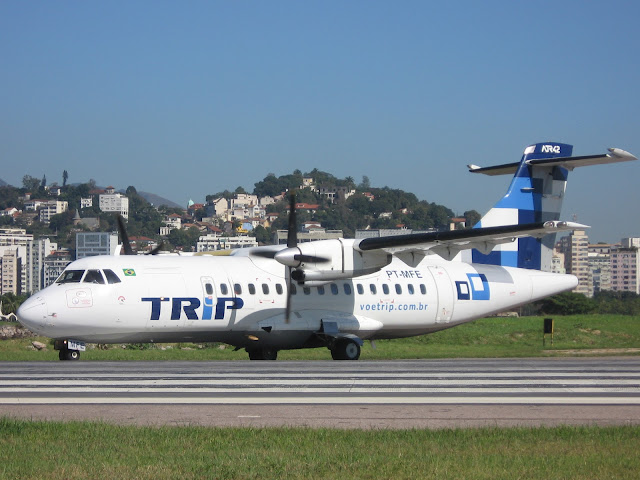 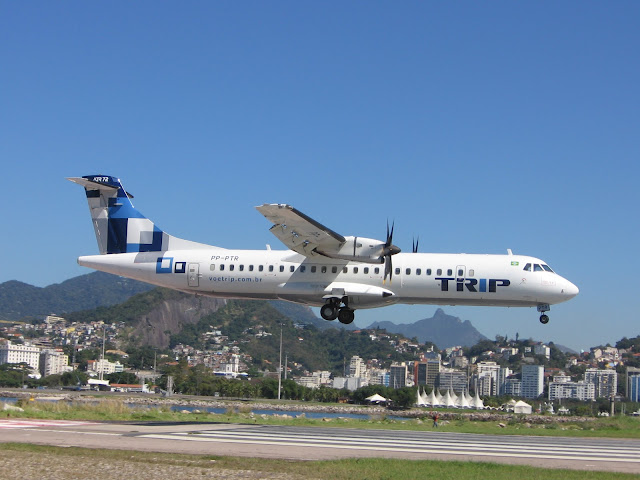 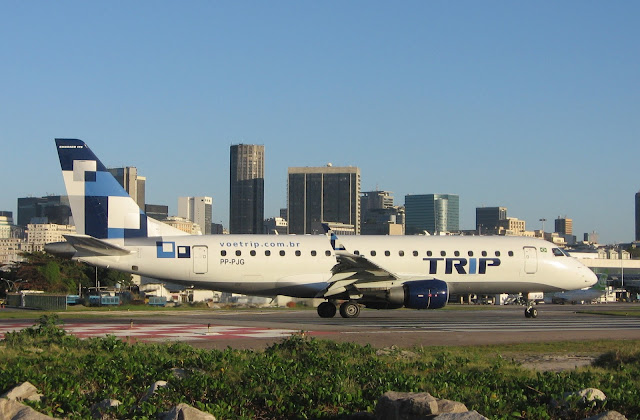 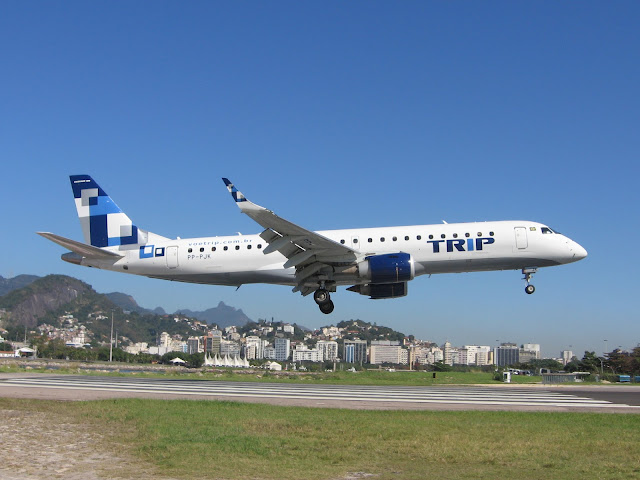 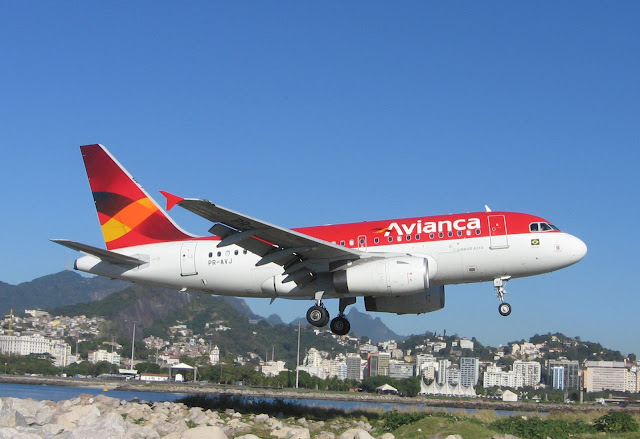 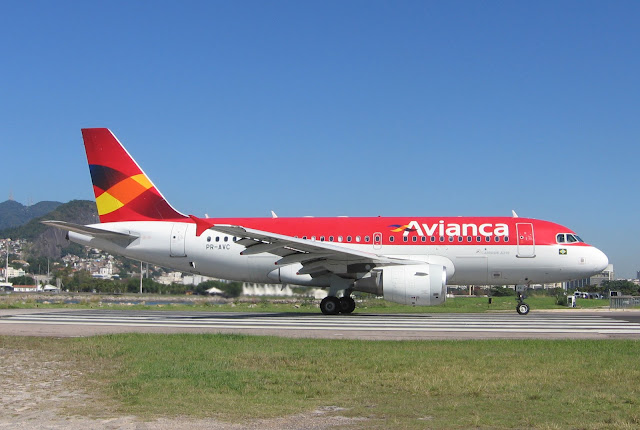 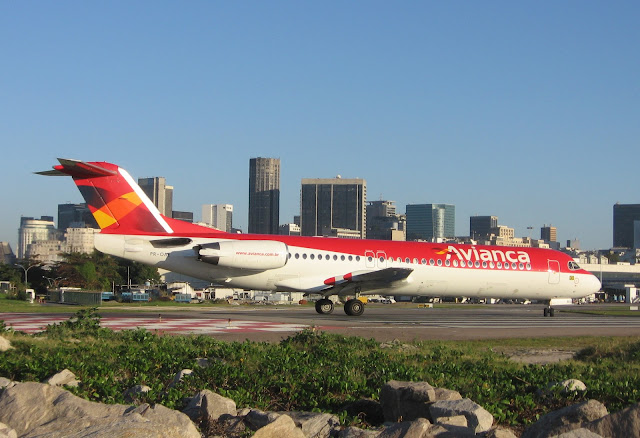 This will be the first use of the 787 in commercial service in South America.
Posted by Phil BOS E-Mail: psp757@hotmail.com at 5:45 PM No comments: 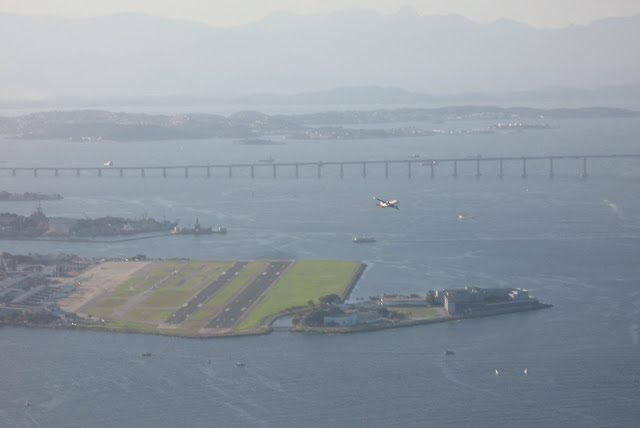 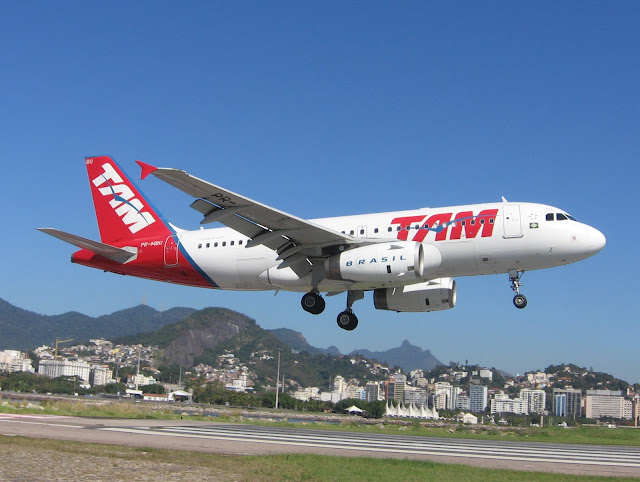 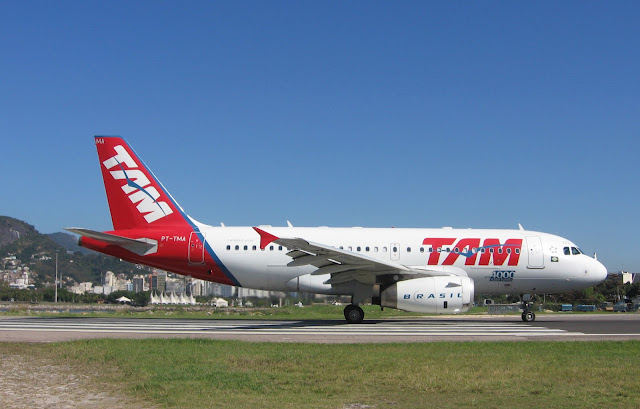 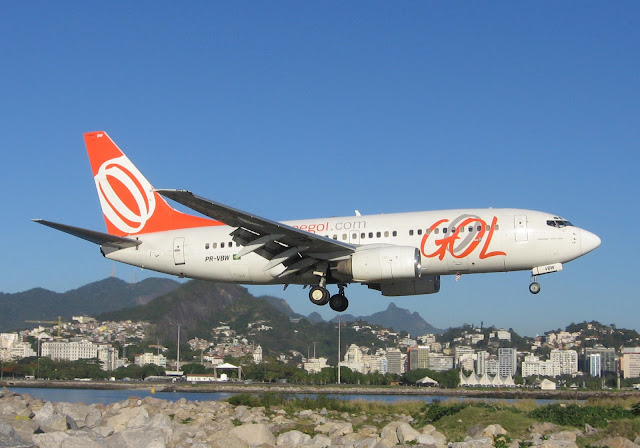 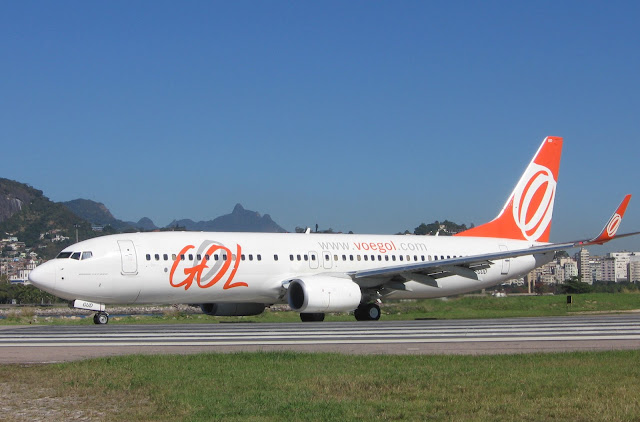 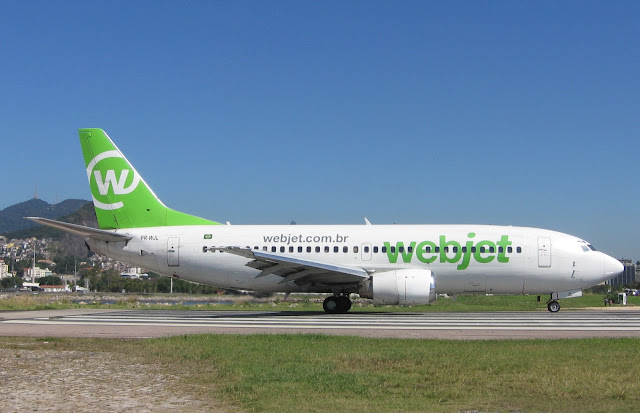 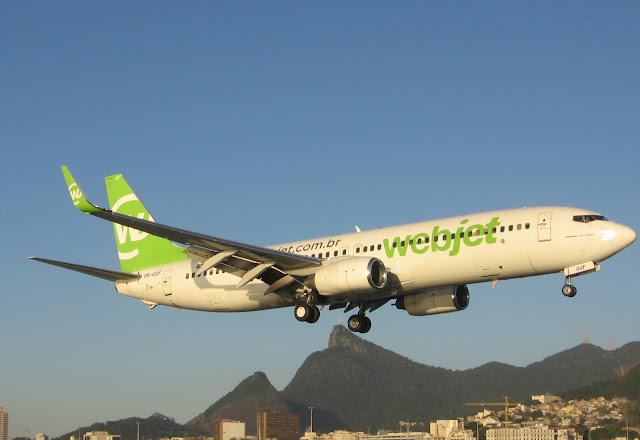 LAN to take delivery of its first 787 on August 31

Flight Global reports that LAN Airlines will take delivery of its first 787, registration CC-BBA, on August 31.  Assembly of the aircraft was completed in late July.

Boeing will hold a ceremony unveiling the 787 at its Everett, Washington production facility on August 30 with the plane departing for Santiago at about 5:00pm on August 31 and arriving in Chile at approx. 9:00am local time on September 1.

The 787 will first see regularly-scheduled service between Santiago and Buenos Aires or Los Angeles.

Source:  www.flightglobal.com
Posted by Phil BOS E-Mail: psp757@hotmail.com at 11:17 AM No comments:

Email ThisBlogThis!Share to TwitterShare to FacebookShare to Pinterest
Labels: 787, LAN

Reports of several parties interested in the auction of the former PLUNA routes and aircraft have surfaced in the last two weeks.

The PLUNA employees union claims interest on the part of Brazilian businessmen, an investor fund based in Madrid, and the Chilean airline LAN.

Dubai-based Al Ahli Holding Group, a powerful consortium of several companies, presented a letter to the Uruguayan government months ago indicating an interest in taking over PLUNA, including its employees and debt, but has not received a response, according to the group's representative in Uruguay, Enrique Gorgas.  The group is looking to own an airline in Latin America motivating it to take a serious look at PLUNA.   Ahli Holding Group CEO, Mohammed Kammas was due to meet with undisclosed parties in Madrid on July 24 to discuss the next steps, according to Gorgas.

Other reports speak of at least seven parties interested in the auction that have requested information on the "auction process, matters related to the employees, and the transactions involved in becoming the official national carrier".

Cesar Iroldi, president of the PLUNA employee union OTAU-OFP, disclosed that the union has talked with two financial investors about a US$ 200 million loan to the union for it to bid at the auction as a "cooperative".  The investors would not actually participate in the management of the new airline nor hold equity in it.

Sol Uruguay, a company formed to fly the Montevideo - Madrid route (which it did not operate) is also reported to be interested in the auction but has said that the opening price of US$ 135 million is too high.  The company commented that "The aircraft are appropriate for some routes, but not for short legs like the Montevideo - Buenos Aires air bridge." which was PLUNA's main route and would be its successor's too.

The Uruguayan bus company Cutcsa is also looking at participating in the auction of PLUNA's assets.  Cutcsa president Juan Salgado has said the company is analyzing the possibility as an opportunity that should be at least looked at.  Were Cutcsa to acquire PLUNA's former assets, it might take on the ex-PLUNA employees on something resembling a cooperative, such as the company has with its bus employees, where the workers share in the profits and decision-making but also in the risks.  Salgado concluded that he would like "as a Uruguayan that PLUNA be owned by Uruguayans with Uruguayan workers that see the airline as the national carrier".

It remains to be seen how many of the above "interested parties" will actually participate in the auction.

Email ThisBlogThis!Share to TwitterShare to FacebookShare to Pinterest
Labels: PLUNA

Juan Carlos Lopez Mena, owner of BQB Lineas Aereas, has said that he is interested in the former PLUNA routes but not the seven CRJ-900's that the government plans to auction off in September.  He described the airline business as "very risky" and that growth needs to be "a little at a time" indicating that acquiring seven aircraft all at once would be talking on too much risk, too quickly.  Referring to his successful Buquebus ferry business between Argentina and Uruguay, Lopez Mena said that he started with one "little ship" and grew from there.   He added that there are "perhaps cheaper or better aircraft" in the market than the CRJ-900's.

Lopez Mena claimed that BQB made plans "to acquire long-range aircraft to fly all around South America.  This was in place before what happened with PLUNA."  The airline "bought planes for delivery later this year and next year" he said without giving further details.  Earlier reports indicated that BQB was looking to buy CRJ-200ER's.

Through the first half of 2012, the Aerolineas Argentinas / Austral airline group already used 76.4% of the subsidies budgeted by the Argentine Congress to cover its operating deficits for the entire calendar year 2012.  AR$ 2.48 billion (US$ 550 million at the official exchange rate) was budgeted with AR$ 1.9 billion (US$ 420 million) already spent by the end of June.  Much of the money was spent to cover June salaries and the 1/2 "aguinaldo" (two bonuses equal to 1/2 monthly salary, one paid in June and the other in December).

At this rate, as in recent years, Aerolineas will need further subsidies from the Congress to stay solvent through the end of the calendar year.  The government (read taxpayer) subsidies to the airline totalled US$ 804 million in 2011.

Editor's Opinion:  It seems like common sense that as long as the government covers losses at Aerolineas, that there will be little incentive for the airline's management and employees to run an efficient operation.  They can relax knowing that they will be protected and the airline will not be allowed to close down.  As long as those are the rules they operate by, the losses will likely continue to grow.