In other news, reader Andreas Fliflet reports that the Turkish Airlines website allows EZE-GRU and GRU-IST bookings but not EZE-IST on select dates in January, suggesting that the airline might be getting their CRS ready to take EZE-IST non-stop bookings, which would be consistent with the carrier's recent talk of introducing 2x/daily non-stops between EZE and IST in the next couple of years.

Alternatively, the airline could be reducing frequencies out of EZE.  Finally, this could all be CRS anomalies while they reset schedules but the possibility of non-stop flights is interesting.

Will the ANAC Attend ?

Las Vegas, Nevada will host the 19th annual World Air Routes 2013 convention from October 5-8, where representatives of airports the world over will gather to make presentations to some 3000 airline representatives from over 100 countries to try to convince them to start service to their destinations.

Question is:  Will the ANAC (Argentine Civil Aviation Directorate) or representatives from Buenos Aires Aeroparque (AEP) attend to try to draw new airline service to Argentina ?  I think the answer is "No, definitely not" !
Posted by Phil BOS E-Mail: psp757@hotmail.com at 9:55 AM No comments:

Delivery of the four A330's that Aerolineas Argentinas was supposed to receive in July and August has been postponed with the first two now due to arrive in August and September.  They are:

The blog "Aviones en Ezeiza" reports that these aircraft will almost certainly be used first on the Buenos Aires Ezeiza (EZE) to Bogota (BOG), Caracas (CCS) and Cancun (CUN) routes until they become ETOPS-certified when they will be able to fly transoceanic routes.

Two A340's are expected to be delivered in the next couple of months too replacing some of the ones that have been departing the Aerolineas fleet:

A340-313X (c/n 193) to be re-registered LV-FPV is currently parked at Brussels (BRU) and is expected to be delivered sometime after 15Sep13. It has already been painted in Skyteam colors featuring a silver fuselage.

The type will enter service on 23Sep13 between Mexico City (MEX) and Monterrey (MTY) with international service set to debut from MEX to New York City (JFK) on 24Sep13, followed by Tokyo Narita (NRT) on 14Oct13 and Paris on 24Oct13.

Buenos Aires Ezeiza (EZE) will start on 20Mar14 to be followed by London Heathrow (LHR) and Madrid (MAD) later that year.

The website of Argentine newspaper La Nacion reports that LAN Argentina received a letter from the Argentine government agency ORSNA - Organismo Regulador del Sistema Nacional de Aeropuertos (National Airport Regulation Agency) on Monday, August 20 ordering the company to abandon its hangar at Buenos Aires Aeroparque (AEP) within 10 days, putting in doubt the company's continued operations in Argentina as LAN claims that without the hangar to service its aircraft its Aeroparque flights and Argentine domestic flights, in general, would become unviable.

This letter is based on an order issued in late 2012 that was to take effect 01Aug13 effectively banning commercial operations from Aeroparque by any Argentine airline other than Aerolineas Argentinas / Austral.

This is the latest chapter in a long-running conflict between the Argentine government and LAN Argentina where the government has repeatedly enforced measures that have been disadvantageous to the carrier's operations in the country.  See blog entry from 20Dec12:

Agustin Agraz, LAN Argentina Director of Corporate Relations, said that the airline will "Resort to the courts to enforce our rights.  We have a signed contract for the hangar and our maintenance base until 2023 with an investment of US$ 5,000,000 and a monthly payment of US$ 20,000."  Asked if the situation could result in employee layoffs, Agraz said that "without the hangar, LAN Argentina's operation is unviable" and added "If they take the hangar away from us we will be obligated to stop flying to the 14 destinations in Argentina (that the airline currently serves)".

The seriousness of the situation is underscored by the fact that LAN's CEO, Ignacio Cueto, interrupted a trip to Colombia to inaugurate the country's first biofuel flight to fly to Argentina to negotiate with airport authorities.

It will be interesting to see if the police show up at Aeroparque in ten days to forcibly remove LAN from the hangar. 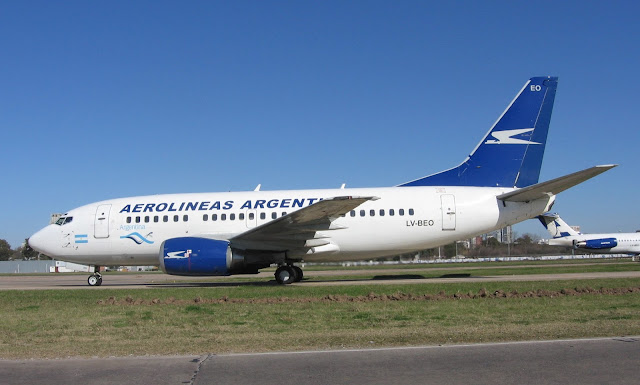 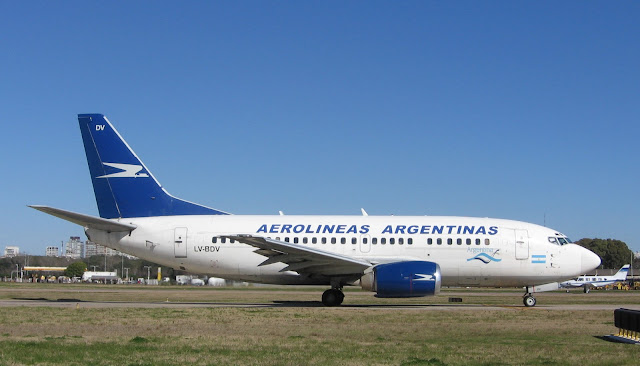 Email ThisBlogThis!Share to TwitterShare to FacebookShare to Pinterest
Labels: 737-700

Air Capital Group of Miami bought the aircraft, which were reportedly to leave Argentina during August bearing American registrations.  The selling price has been kept private between the airline and the buyer.

Checking the company's website, http://www.air-capital.com/aerothrust.html, its AeroThrust division specializes in engineering work on the JT8D engine (the type used on the MD-80 Series) so its acquisition of the AU/AR MD-80's is presumably for their engines with the airframes possibly to be used for spares and/or scrapped.

Most of the above aircraft, including LV-BEG, LV-WGM, and LV-VAG have been parked at the San Juan (UAQ) Argentina airport for at least a year, with LV-WGN resting at Jujuy (JUJ) and LV-BGZ at Buenos Aires Aeroparque (AEP).

One other MD-80, LV-VBX, (c/n 53407) continues parked at San Juan (UAQ) not available for immediate sale apparently due to legal reasons.

Austral MD-83, LV-BGZ at Buenos Aires Aeroparque (AEP)
resplendent in the carrier's new colors on 26May12

LV-BGZ is unique among these aircraft in that it was the only one painted in Austral's new colors and it underwent a major check only a few weeks before being retired from service, having reportedly operated a few scheduled flights in the new colors. 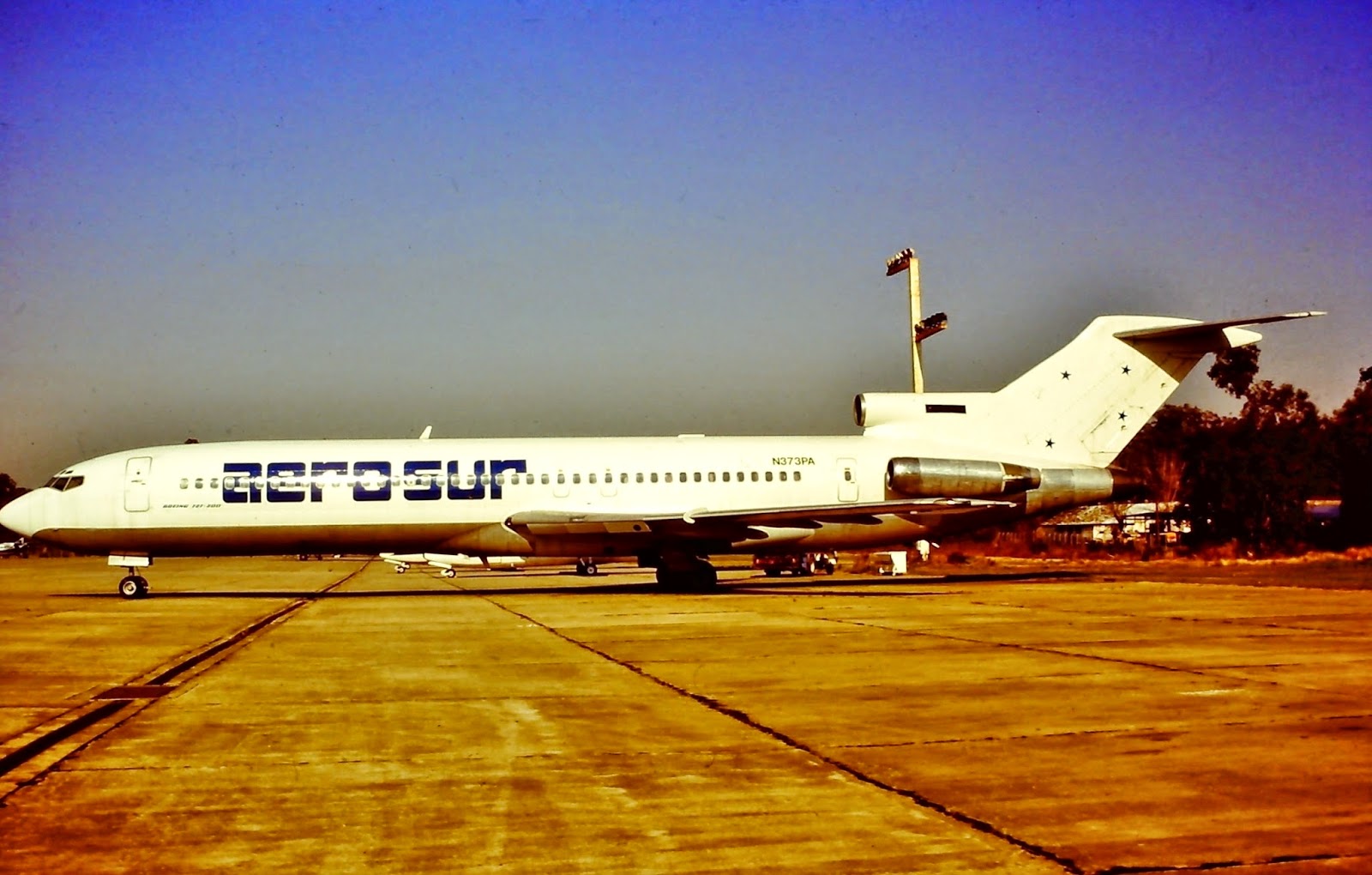 Most 727-100's and 200's that flew in Argentina were operated by Aerolineas Argentinas in their full colors with a few notable exceptions:

The above information is from the excellent blog covering the history of individual aircraft operated in commercial service in Argentina featuring some very rare and interesting photos.