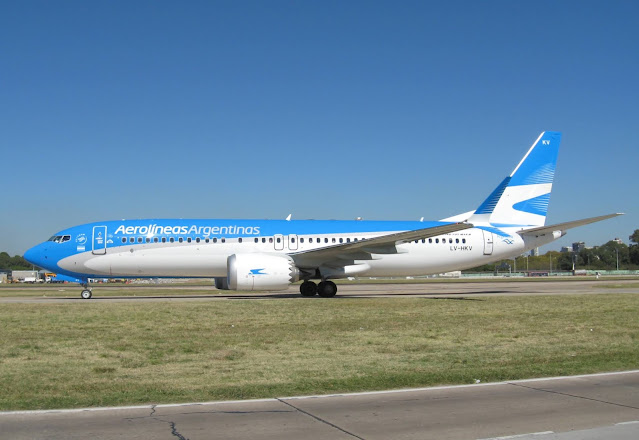 Aerolineas Argentinas grounded all five 737 MAX 8's in its fleet when the type of aircraft was grounded worldwide in March 2019.  With the recertification of the type in November 2020, Aerolineas started to prepare its MAX's for a return to service on a gradual basis as air traffic resumed in Argentina.

The latest MAX to be reactivated was LV-HKV (c/n 44294/6807) on 01Oct21.  The sole remaining MAX is LV-GVE (c/n 64208/6717) which is expected to return online in December.  Aerolineas holds orders for seven more of the 737 MAX series for a total of twelve airframes expected to be delivered by the latter part of the decade.

So far, the reactivated Aerolineas 737 MAX 8's have flown exclusively domestic services in Argentina with only a handful of exceptions, but they are slated to eventually fly internationally, especially on "longer" and "thinner" routes with less passenger traffic, such as Buenos Aires Ezeiza (EZE) to Cancun (CUN) and Punta Cana (PUJ).

FLEET UPDATE: Jetsmart Argentina added a fifth A320, LV-JQE, featuring a penguin on its tail, to its fleet on 29Sep21

Jetsmart Argentina took delivery of A320, LV-JQE (c/n 8539), when the aircraft arrived at Buenos Aires Ezeiza (EZE) on 29Sep21 with the plane entering service with the airline on 06Oct21.
LV-JQE sports a Penguin on its tail and is the fifth A320 in the Argentine LCC's fleet, joining LV-HEK (c/n 8599) Huemul (deer), LV-IVO (c/n 8838) Cardinal, LV-HVT (c/n 8574) Jaguar, and LV-IVN (c/n 8730) Fox.
Photo of LV-JQE:
Jetsmart Argentina A320, LV-JQE, at Buenos Aires Aeroparque (AEP) on 08Oct21
With five A320's, Jetsmart Argentina now has its largest fleet of A320's to date, exceeding the four aircraft of the type that it had prior to the start of the pandemic in March 2020.  The carrier also operated a fleet of three ex-Norwegian Air Argentina 737-800's in early 2020 wearing the colors of the European parent carrier, but with no titles.
The new addition will facilitate planned new service by Jetsmart Argentina between Buenos Aires Aeroparque (AEP) and Jujuy (JUJ) and Comodoro Rivadavia (CRD) on 14Oct21 and 20Oct21, respectively, plus new flights from Salta (SLA) to Iguazu (IGR) on 19Oct21.
LV-JQE was originally delivered to Jetsmart Chile in Santiago (SCL) on 21Nov18 as CC-AWG.  The aircraft was re-registered in Argentina in May 2021 with Jetsmart Argentina apparently planning to add the plane to its fleet in August but the carrier was denied permission to add the aircraft by the Argentine governmental  authorities because of "lack of space" at Buenos Aires Aeroparque (AEP) where it would have been based.  However, the authorities eventually relented, reversing their decision and allowing Jetsmart Argentina to bring LV-JQE to join its four other A320's.
Sources:
https://www.airfleets.net/flottecie/JetSMART%20Argentina-active-a320.htm
https://www.aeromagazine.net/artigo/jet-smart-argentina-se-expande_1966.html
https://www.aviacionline.com/2021/09/jetsmart-argentina-incorpora-un-quinto-airbus-a320-200/
https://www.aviacionline.com/2021/08/deniegan-a-jetsmart-solicitud-de-espacio-para-un-quinto-avion-en-el-aeroparque-jorge-newbery/
https://www.aviacionline.com/2021/09/llego-a-buenos-aires-el-nuevo-airbus-a320-de-jetsmart-argentina/
https://www.aviacionline.com/2021/10/el-quinto-airbus-a320-de-jetsmart-argentina-inicio-sus-operaciones-regulares/
Posted by Phil BOS E-Mail: psp757@hotmail.com at 1:43 PM No comments: 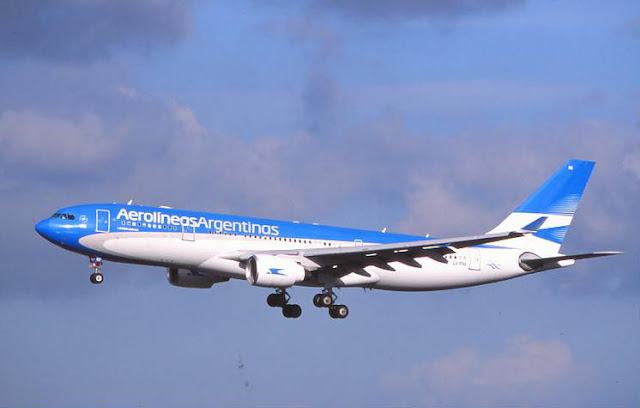 Aerolineas Argentinas A330-200, LV-FNI (c/n 290) on approach to an unnamed airfield.  (Phil Perry Collection)
Aerolineas Argentinas recently retired the first A330 that it ever took delivery of, A330-200, LV-FNI (c/n 290).
The aircraft was first delivered to SABENA of Belgium in 1999, continuing to fly for several carriers, including VG Airlines and Delsey, both also of Belgium, and, more recently, Malaysia Airlines, until it joined Aerolineas in September 2013.  LV-FNI soldiered on with the Argentine national flag carrier until it was withdrawn from use and stored locally in Argentina on 16Jun21.  The aircraft was finally returned to the lessor (appears to be AerCap) when it departed Buenos Aires Ezeiza (EZE) on 23Sep21 to Miami (MIA) and Roswell (ROW), arriving at the New Mexico facility on 25Sep21.
Aerolineas Argentinas built up a fleet of ten A330-200's between 2013 and 2017 in replacement of its long-range A340 and 747 fleets..  In addition to LV-FNI being returned, LV-FNJ (c/n 300) and LV-GKO (c/n 587) have been parked since March 2020 with LV-FNK (c/n 358) and LV-FNL (c/n 364) possibly to be returned to their lessor when their current leases expire in April 2022.  However, two A330-200's will be added to the Aerolineas fleet when LV-KAN (c/n 877) and LV-KAO (c/n 899), both formerly of TAP Air Portugal, are delivered to Argentina before year's end.
If LV-FNK and LV-GKO both return to service with Aerolineas, the carrier will have a total of nine long-range Airbus twins in service.
Sources:
https://www.aviacionline.com/2021/09/aerolineas-argentinas-retiro-su-primer-airbus-a330-200/
https://www.airfleets.net/flottecie/Aerolineas%20Argentinas-active-a330.htm
https://loudandclearisnotenought.blogspot.com/2011/07/lv-fni-airbus-330-223-cn-290.html?m=1
https://www.flightradar24.com/data/aircraft/lv-fni
Posted by Phil BOS E-Mail: psp757@hotmail.com at 7:23 PM No comments: