Aviacion News reported in its 23Apr15 online issue that, contrary to earlier reports, Amaszonas will start flying one of its own CRJ-200's instead of ex-BQB Lineas Aereas ATR-72's from Montevideo (MVD) to Buenos Aires Aeroparque (AEP) and Asuncion (ASU) on 04May15.

Amaszonas purchased BQB's AOC (Air Operator Certificate) earlier this month and it was announced by several media outlets that the Bolivian carrier would start service from Montevideo (MVD) with former BQB aircraft while it went through the approvals process for operating its own planes from the Uruguayan capital. However, it now appears that Amaszonas will wet-lease one of its own CRJ-200's flown by its own crews to "Amaszonas Uruguay", a measure made easier because the Bolivian airline recently took delivery of it eighth CRJ-200.
Editor's Note:

One formidable obstacle for Amaszonas could be getting approval from the Argentine government to fly its own CRJ-200's to Aeroparque given that the present government has been very reluctant to allow new services by foreign carriers into Argentine airports.

Airliner World magazine reported in its January 2015 issue that Air Europa will reportedly lease a single 787 from an undisclosed European carrier for use on its Madrid (MAD) - Montevideo (MVD) route starting in April 2015.  However, a quick check of www.flightstats.com and www.orbitz.com shows Air Europa still operating A330-200's on the route through May 2015.

In the early morning hours of Thursday, April 16, Bolivian airline Amaszonas came to an agreement with BQB Lineas Aereas to purchase the latter's Uruguayan Air Operator's Certificate and the route rights that come with it from Montevideo (MVD) to Buenos Aires Aeroparque (AEP) and Asuncion (ASU).

Amaszonas has also entered into negotiations with BQB to lease the carrier's three ATR-72-212A's presumably allowing Amaszonas to receive permission from the Uruguayan, Argentine and Paraguayan aviation authorities to start service on the above-mentioned routes, with a target date of Monday, May 4, since such service would merely be a continuation of the flights that BQB operated until recently.  BQB technically "suspended" services on April 11 allowing the carrier to restart flights within 60 days with its current operating certificate as opposed to closing down which would have resulted in the cancellation of its AOC.
Amaszonas has no intention of buying BQB's ATR-72-212A's because it already has a fleet of eight 50-seat CRJ-200's but the carrier expects that it will take up to six months to obtain all the proper authorizations for it to introduce the CRJ-200's between Montevideo (MVD) and Buenos Aires Aeroparque (AEP) and Asuncion (ASU).


Amaszonas will retain 30 of 90 BQB's employees effective immediately to transition to Amaszonas plus 30 more to maintain the operating certificate for the ATR-72's (flight crews and maintenance staff) with the last 30 being laid off (made redundant) unless the carrier needs them for future growth, in which case they might be offered jobs again.

Amaszonas is a privately-owned carrier that has grown to help fill the vacuum left by the closing of Bolivian carriers Lloyd Aero Boliviano and Aero Sur in recent years.  Other carriers that have started or grown in Bolivia in recent times include the government-owned Boliviana de Aviacion, the military airline TAM, and most recently EcoJet.

Long-term plans are for the carrier to invest $ 22 million to build up to a fleet of 16 CRJ-200's and a route network of 40 destinations by 2017, including several touristic points, such as Foz de Iguacu, Rio de Janeiro and the Galapagos Islands, building its Santa Cruz base into a major new South American hub. 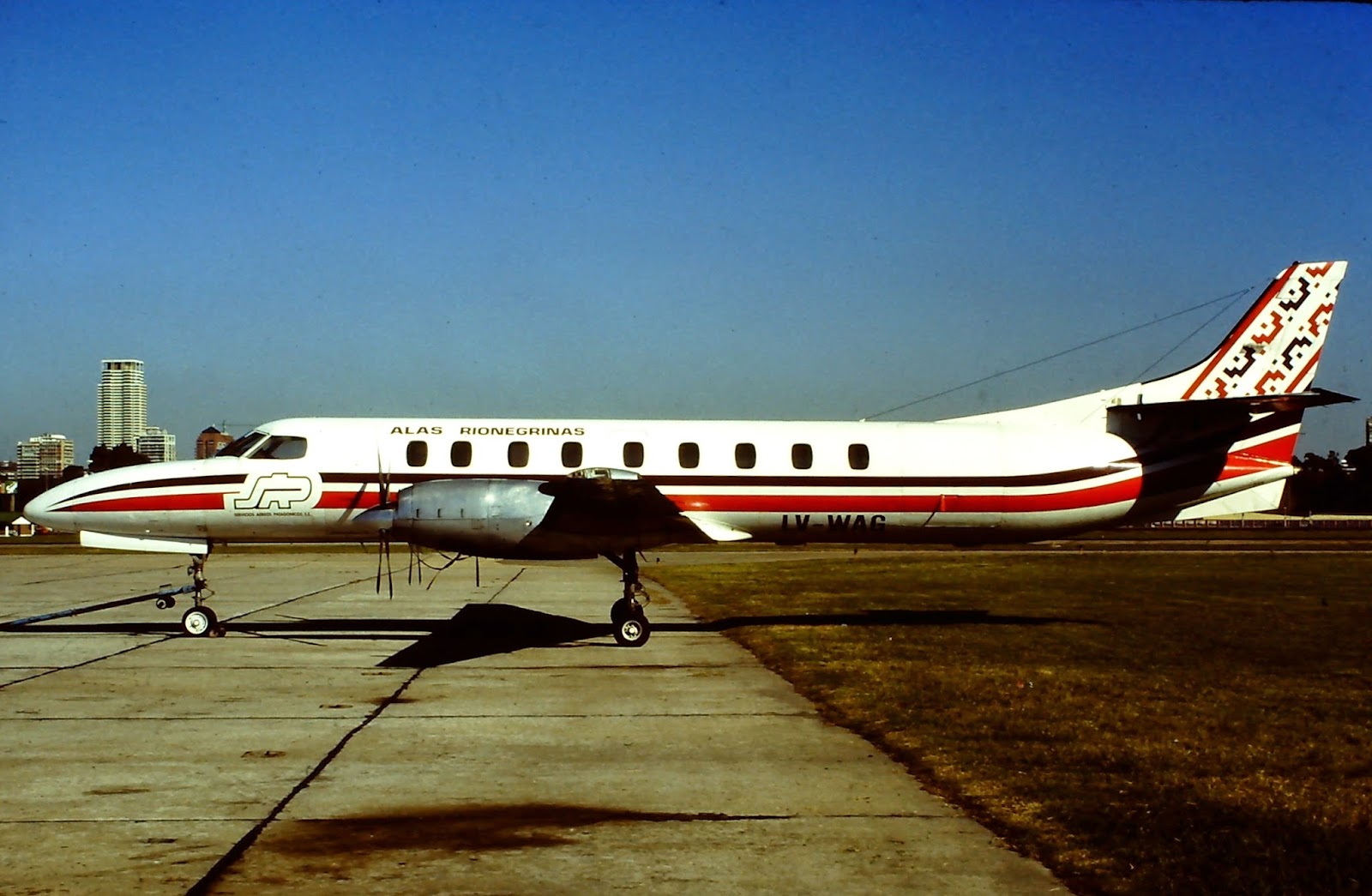 LV-WAG was originally built as a Merlin in 1982 and converted to Metro standard in 1987.

Originally delivered to Volkswagen in 1983 as a corporate aircraft registered as D-CKVW, the aircraft went on to fly for German regional airlines Bat-Air Flugdienst, Nurnberger Flugdienst and Eurowings before finding its way to Argentina in 1993 where it was registered as LV-WAG flying for SAPSE (Servicios Aereos Patagonicos) dba Alas Rionegrinas until the airline's demise in 1997.
The aircraft was stored along with the rest of the Alas Rionegrinas fleet in a hangar at Viedma (VDM), Rio Negro in Patagonia along the Atlantic coast where it still stands today in a state of disrepair as seen in this photo from Linea ALA & Rollout:

ROUTE UPDATE: LAN Airlines has been flying the 787-9 between Santiago (SCL) and Buenos Aires Ezeiza (EZE) since 01Apr15

BQB recently announced that it would suspend operations on April 11. The Uruguayan airline started flying in May 2010 as a subsidiary of Buquebus, which operates the main ferry services between Argentina and Uruguay, having a virtual monopoly on the route.

However, signs of financial difficulties appeared in August 2014 when it briefly failed to make payments to the IATA clearinghouse with more significant problems being signaled by the cancellation of services to the Brazilian cities of Porto Alegre (POA), Curitiba (CWB) and Sao Paulo Guarulhos (GRU), all in September. In addition, the airline returned one of its ATR-72-200's, CX-LFL (c/n 570) to the Toulouse, France headquarters of the aircraft's manufacturer, Aerospatiale, in February 2015.

BQB started operations in May 2010 with domestic flights from Montevideo (MVD) to Salto (STY), Uruguay followed by service between Buenos Aires Aeroparque (AEP) and Punta del Este (PDP), Uruguay but sought to expand and fill the void left by PLUNA when the latter carrier shut down operations in June 2012.  However, the Argentine authorities never allowed BQB to establish a major presence on the lucrative Montevideo (MVD) - Aeroparque (AEP) route, being limited to two daily frequencies. In addition to the airline's domestic flights to Salto (STY), it also flew to Rivera (RVY), Uruguay but abandoned both routes due to poor loads.

As it now wraps up services, BQB is down to two ATR-72-200's and 2x/daily flights from Montevideo (MVD) to Aeroparque and 5x/weekly to Asuncion (ASU).

Factors in the airline's decision to close include conflict with the Uruguayan government over BQB's controversial role in the failed late 2012 attempt to auction off the seven company-owned ex-PLUNA CRJ-900's plus the imminent start-up of Alas Uruguay with 737-300's.

Rumor has it that BQB's operation might still be salvaged in the form of a purchase by the privately-owned Bolivian airline, Amaszonas, which is seeking to expand in the region.