At least since early last year, when the Leadgate management group was still running PLUNA, Uruguay has requested Argentina to authorize use of the "Papix" air route between Montevideo (MVD) and Buenos Aires Aeroparque (AEP).

This route is 53 nautical miles shorter than the existing route which requires the airline to overfly Argentine territory for a longer period of time.  This has resulted in greater fuel consumption and higher Argentine overflight charges totaling some US$ 1.4 million per year for the ex-PLUNA.

The "Papix" route which would route aircraft directly from Colonia, Uruguay thirty miles across the Rio de la Plata to Buenos Aires would save 3-5 minutes flying time with lower fuel consumption and much less time overflying Argentine territory.

The Uruguayan aviation authorities at the Civil Aviation Directorate (DINACIA) thought that they had a preliminary agreement for this new routing but Argentina recently decided not to allow it, apparently to avoid losing most of the overflight charges that they are now collecting.

The "Papix" route was to be one of the first steps in the restructuring of airspace over Argentina, Brazil and Uruguay that is to be designed and implemented by an unnamed American company with the idea of making air routings shorter and more efficient and economical.

The worldwide fleet of Boeing 787 aircraft has been grounded due to battery fires on board two aircraft, the cause of which has not been determined yet, meaning that the possibility of fires on other aircraft remains a real danger.

Like other operators, LAN has grounded its three 787's until the problem has been defined which could be many months or even longer if the lithium ion batteries currently being used need to be replaced with more conventional batteries and the battery compartment needs to be redesigned, as well.

At the time of the grounding, LAN was flying the 787 from Lima (LIM) to Los Angeles (LAX) and Santiago (SCL) to Buenos Aires Ezeiza (EZE) too.  The Chilean carrier is reportedly using the 767-300ER as the replacement aircraft on the latter route.

Air Europa announced on 24Jan13 that it will start flying from Madrid (MAD) to Montevideo (MVD) three times weekly effective 03Jun13 with 299-seat A330-200 aircraft, replacing the Iberia A340 service being suspended in late March.

Flights will initially operate from Madrid (MAD) to Montevideo (MVD) on Mondays, Wednesdays and Fridays, returning to Spain on the following days; Tuesdays, Thursdays, and Saturdays.  Assuming that bookings are healthy, the Spanish airline would increase the service to five weekly flights in the "near future".

A determining factor in Air Europa's decision might have been the decision just this past Monday 21Jan13 by ANCAP, Uruguay's national fuel company, to reduce the price of Jet A1 fuel to the same level of neighboring countries. The higher price weighed especially heavily on operators of long-distance routes, such as Montevideo (MVD) - Madrid (MAD) and reportedly played a role in Iberia's decision to drop the route.

Uruguayan authorities are pleased not only by the new service but also the backing of the Grupo Globalia tour operator group that moves a lot of leisure traffic and will hopefully bring more European tourism to Uruguay.

Editor's Comment:  Will this mean that BQB Lineas Aereas' planned new service from Montevideo (MVD) to Madrid (MAD) with 767-300's will be suspended ? 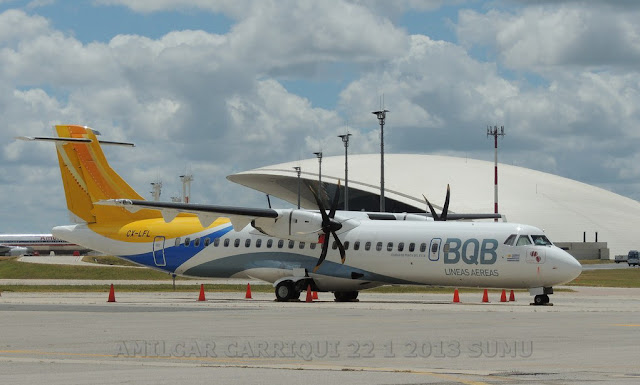 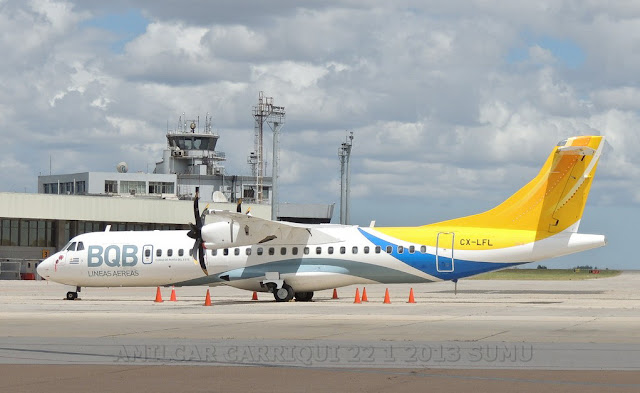 Argentine government subsidies to Aerolineas Argentinas grew to nearly US$ 1 billion (thousand million in Spanish) in 2012 to cover the national carrier's increased losses.

Aerolineas' President Mariano Recalde said two years ago that the carrier would break even in 2012 and he projected profits in the following years but that appears very unlikely now.  2011 was viewed as an exceptional year because of the ashes from the Chilean volcano that interrupted operations off and on over several months provoking losses but there were no such extraordinary circumstances in 2012, though the Argentine economy was not as strong this past year as in 2011.

According to Aviacion News, subsidies to Aerolineas totaled almost as much as the airline's revenue from tickets and cargo operations in 2012, which, if true, means that the carrier's revenue only covers half of its expenses, a highly unprofitable situation !

The airline carried a record number of passengers in 2012, with traveler number 7 million for the year arriving at Buenos Aires Ezeiza (EZE) on 27Dec12 to a festive greeting by Recalde and a group of company representatives.  However, according to La Nacion, Aerolineas' losses grew even faster than the growth in passenger numbers with a 16.3% increase in passengers between the two years but the per passenger subsidy growing from 482 pesos in 2011 to 682 pesos in 2012, a 42% increase.  Some of that could be explained by the Argentine peso losing value against the US dollar during the past year, but that only amounted to about 10% at the official exchange rate. 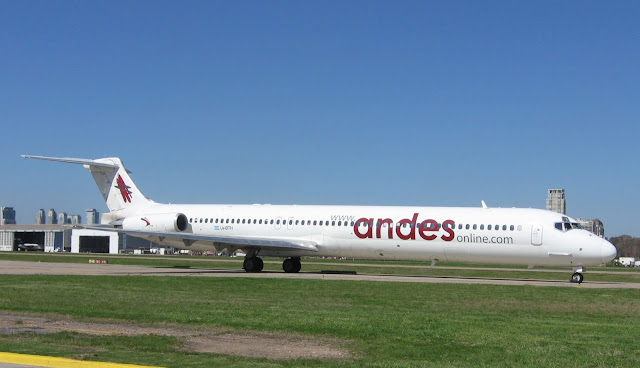 On 17Jan13 at 5:46 pm local time an Aerolineas Argentinas A340-300 that had just arrived at Miami International Airport from Buenos Aires clipped an Air France 777-300 that was getting ready to depart with the Argentine aircraft's left wingtip colliding with the French airliner's tail.  Passengers reported a booming sound and the aircraft shook but there were no injuries.

The passengers of the Aerolineas plane were allowed to disembark normally but the flight operated by the French airliner was cancelled with its 350 passengers deplaning for rebooking on other flights.  The scene at the Air France ticket counter was reportedly chaotic with tempers flaring and there were even physical confrontations as hundreds of travelers had to wait in line for alternative travel plans.

Both planes were taken out of service for repairs and an investigation was underway to determine the cause of the collision.

The aircraft involved in the collision were:

Aerolineas Argentinas A340-312, LV-BMT (c/n 48) which is an early example of the type that was originally delivered to Air Mauritius in 1994 and also saw service with Air Jamaica and Air Canada before joining the Aerolineas fleet in 2007. 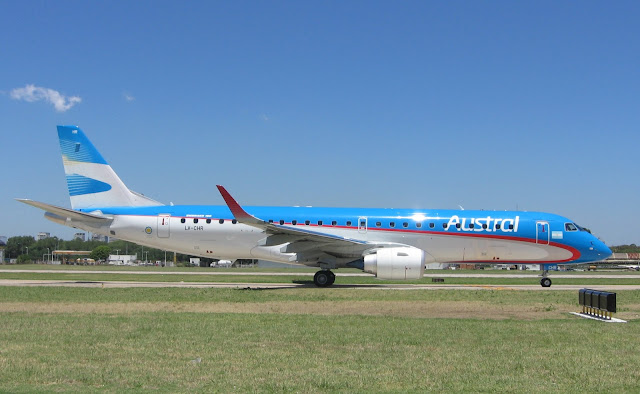 The BQB flights will serve the tourist market traveling from Paraguay to the Uruguayan beach resort of Punta del Este on an experimental basis until 17Feb13.

The Sol flights will also be a summer service to the beaches of Villa Gesell and neighboring Pinamar.

The Macair flights are part of a planned expansion into Paraguay that will likely also include domestic flights within the country.

http://aeronauticaparaguay.blogspot.com.ar/2012/12/vuelos-de-cabotaje-activaran-el-turismo.html
Posted by Phil BOS E-Mail: psp757@hotmail.com at 10:39 AM No comments:

Doubts regarding the viability of the airline that the former PLUNA employees are proposing have come to light.

The Uruguayan government believes that the plan's revenue projections are too optimistic and anticipated costs are "detached from reality".  One report estimates total employee compensation costs at an average of US$ 4,000 per employee per month, a small fortune in Uruguay.

Also, one of the key provisions of the new carrier's business plan is that the Uruguayan government would assume the debt payments on the seven ex-PLUNA CRJ-900's remaining in government hands for two years, a US$ 34.4 million obligation that the government does not want to assume.

Finally, the employees would need to get the new airline operational within 180 days according to the conditions of the government legislation but there are doubts that all of the necessary preparations, authorizations and formalities can be completed on time, which include forming a "civil non-profit society" and presenting documentation and supporting data to the Civil Aviation & Aeronautical Infrastructure Directorate (DINACIA) and the Ministry of Transport & Public Works (MTOP). 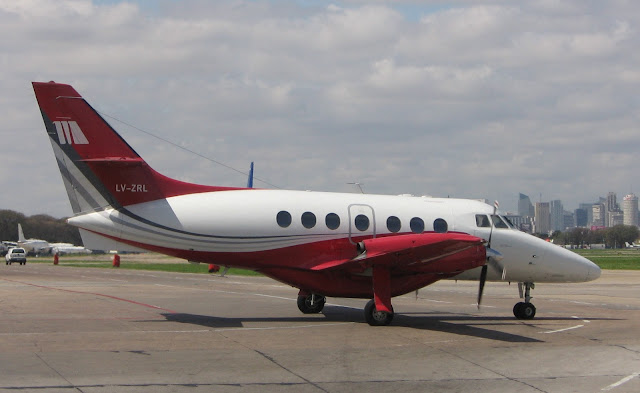