NOTICE TO READERS: Editor Traveling until May 31

I have posted few news items since the beginning of February because I was preparing for an extended trip to the United States, which I started on March 8.  I plan to return to Argentina in the middle of May and start posting regularly again approximately the end of May.

During my visit to the U.S. I plan to access a few old photos and scan a number of slides from my collection taken at Aeroparque (AEP), Ezeiza (EZE) and Montevideo (MVD) in the 1970's through 1990's which ought to provide some very interesting material for the blog in addition to the usual postings.

In the meantime, I might do the occasional post if there is some very interesting news to convey.

Otherwise, you should plan on seeing regular postings in about two months' time.

FLEET UPDATE: Aerolineas Argentinas A340 & A330

As reported earlier, Aerolineas Argentinas is looking to acquire four ex-Iberia A340-300's owned by ILFC.  The transaction has been held up because neither party wants to bear the cost of reconfiguring the aircraft from the 47 business class seats previously flown by Iberia to the 20 desired by Aerolineas.  The four A340-300's would replace four company-owned Aerolineas A340-200's which were manufactured back in 1994 and 1995 and two A340-300's currently leased from ILFC at a high monthly rate.

Aerolineas is also analyzing the acquisition of four A330-200's, two of which are ex-SABENA and ex-Malaysia, plus three Gulf Air A330's.

There have been recurring rumors that Austral is considering acquiring 2/3 more Embraer 190's to add service to the Brazilian cities of Belo Horizonte (CNF), Brasilia (BSB), and Curitiba (CWB).

The specific aircraft that would be taken up are c/n 589, that was originally ordered by bankrupt Ukrainian carrier Aerosvit, and c/n 593 and c/n 608 not taken up by Estonian Airlines.

Austral reports average utilization of 12 hours per day for the current Embraer 190 fleet. However, aircraft LV-CET recently came out of its 6,000-hour "Basic Check 1" after approx. 27 months and 800 days in service (was delivered on 04Oct10), which would yield an average daily utilization of 7.5 hours. Additionally, the author of this blog has observed that most aircraft turnarounds by Aerolineas Argentinas and Austral aircraft at Buenos Aires Aeroparque (AEP) take 90-120 minutes so the claim of 12 hours per day utilization seems doubtful.

On the morning of 11Feb13, the Uruguayan fishing boat "Dartesa I" caught in its fishing nets what appeared to be the door of an aircraft, some three miles east of Isla de Flores, near the "exclusion zone" established last year for the search of the remains of Air Class Metro, CX-LAS.  The aircraft crashed into the Rio de la Plata sea on 06Jun12 with the loss of its two crew members while operating a freighter flight from Montevideo (MVD) to Buenos Aires Ezeiza (EZE).

Last September the professional diver, Hector Bado, had located the remains of the CX-LAS' fuselage, Flight Data Recorder, and Cockpit Voice Recorders (both of which yielded no information) when further search operations were called off by the Uruguayan Navy.  Since then, Judge Mariana Mota had ordered resumption of the search for more remains of the aircraft but the Navy had not complied, sparking accusations of a possible cover-up.  More recently, before the recent discovery, the Navy finally relented and was making plans to start the search again with Mr. Bado.

Mr. Bado has reasoned that the finding of the door a couple of miles east of the fuselage's location suggests that it might have detached from the aircraft in flight.  Although not an aviation expert, he has further speculated that the door might be the rear cargo door and that it detached and hit the aircraft's tail causing the plane to crash.  Further fueling this theory is the ATC recording of the plane's copilot asking "What happens if we go to 8,000 feet?" which is the altitude at which they would have started pressurizing the aircraft.  There have been rumors that the rear cargo door had had problems which would fit in with the co-pilot's comment.

Austral MD-81, LV-WFN, One of the Oldest MD-80's, Flown to Moron Museum for Display 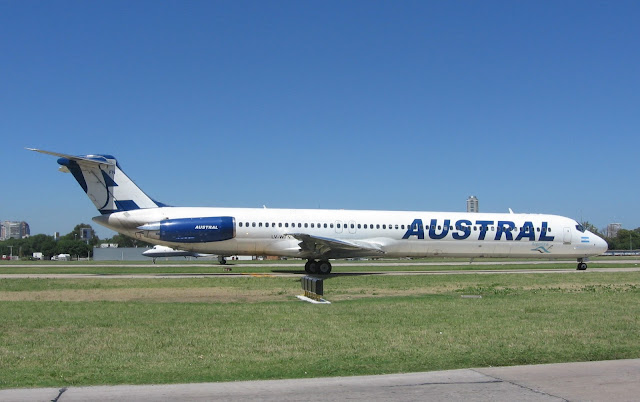 On 26Feb13, Austral MD-81, LV-WFN (c/n 48025/952) was flown from Cordoba (COR), where it had been stored since retirement from the airline's fleet over a year ago, to the Museo Nacional de Aeronautica at the Moron Air Force Base just west of Buenos Aires for preservation and future display.  The approx. 700km / 438 mile ferry flight was flown with the aircraft unpressurized and with the landing gear down.

This is a significant aircraft in the history of Austral as it was the first MD-80 series plane delivered to the airline (of an original order of three examples).  The aircraft was delivered with registration N10027 on 08Jan81 and was re-registered LV-WFN on 16Dec93.  Its first flight was on 26Aug80 and it accumulated 70,445 flight hours over 60,351 cycles in its service life.

One 737-200 in full 1975 Aerolineas Argentinas colors and two BAC-111's are also stored at Moron, but one of the latter is located in a restricted area and the other is in somewhat derelict condition.