Airports operated by Aeropuertos Argentinos 2000 see a 14.1% increase in Passenger Traffic in August 2013

Aeropuertos Argentinos 2000, the private concession that operates 33 airports in Argentina, including nearly all of the facilities with significant airline service (two notable exceptions being Rosario (ROS) and Ushuaia (USH)) reported an overall increase in passenger traffic at its member airfields of 6.1% in August 2013 over the year-earlier period with total passengers numbering 2,130,877.

This included an average increase in domestic traffic of 14.1% and a decrease in international passengers of 2.5%.

Numbers for some specific airports: 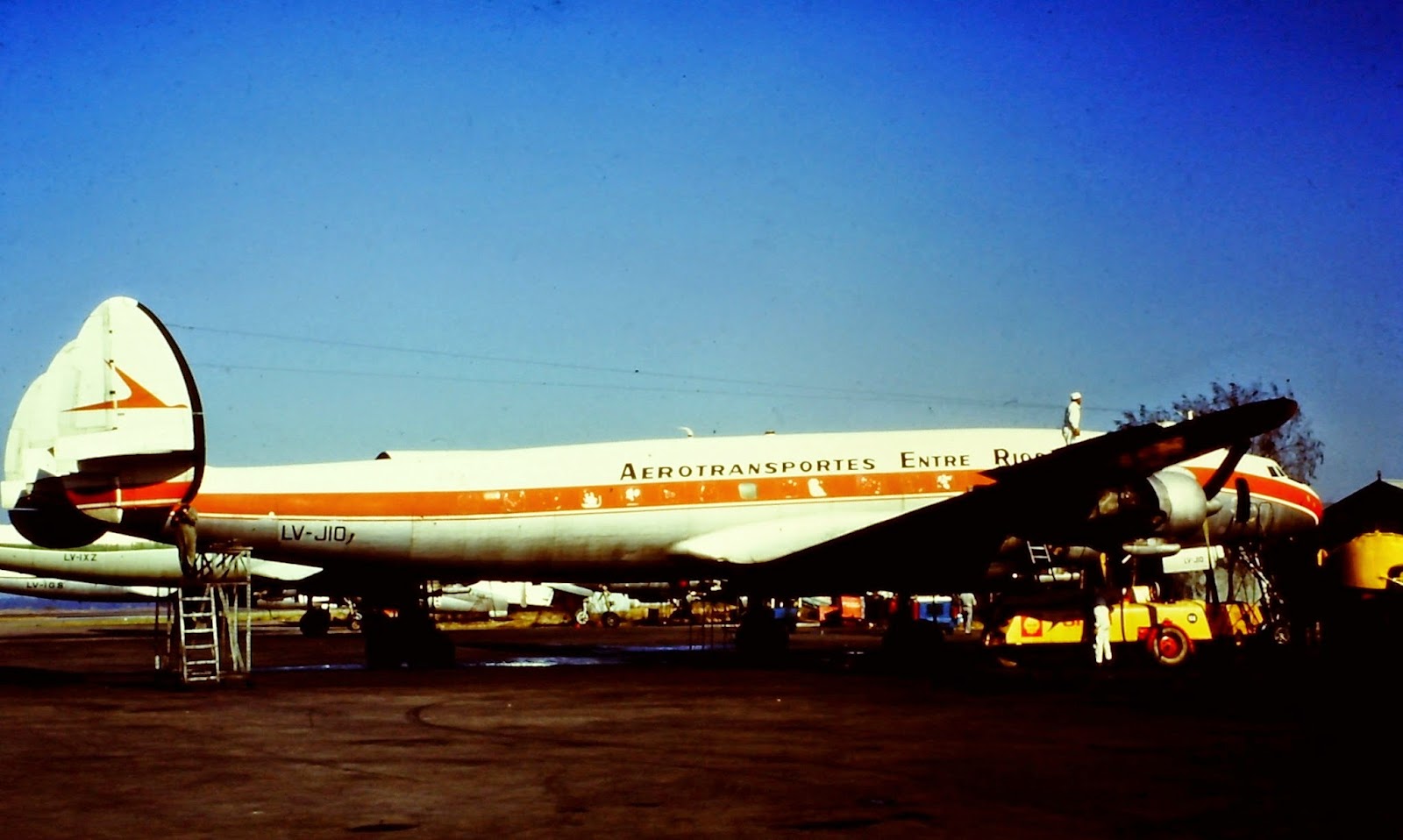 This aircraft was delivered to Seaboard & Western Airlines (later renamed Seaboard World Airlines) as N1010C on 18Feb57 but was immediately leased to and went into service with Eastern Airlines. It was subsequently leased to TAP - Transportes Aereos Portugueses, Capital Airlines and LEBCA of Venezuela before ending up with Aerotransportes Entre Rios in December 1968 with which it flew until 1971 before being retired in Miami where it was scrapped in 1972.

The L-1049H was a convertible passenger/freight version of the L-1049G with 53 manufactured, including the last Constellation built, which was handed over to Flying Tigers in 1959.

Aerotransporte Entre Rios was founded in Argentina in 1962 as an all-cargo carrier transporting livestock around South America initially with C-46's, followed by an ex-KLM L-749 Constellation and four L-1049's.  Later. a Britannia and several CC-106's (version of the CL-44 built for the Royal Canadian Air Force) joined the fleet but AER lost the Britannia and two of the CC-106's in accidents, one in Miami and the other en route from Montevideo (MVD) to Santiago (SCL).  AER ceased services in the late 1970's.

Some of the charter flights planned for the coming southern hemisphere summer from Argentina to the Dominican Republic:

It is unclear if flights will actually operate to all of these airports and with what frequency, but Havana (HAV) and Varadero (VRA) are generally frequently-used by foreign carriers.

ROUTE UPDATE: Austral to operate to Parana (PRA) after a 25-year absence

Austral will resume flights to Parana (PRA), a city of 400,000 people in Argentina's Entre Rios province across the Parana River from the city of Santa Fe, after a 25-year absence.  The airline last operated to Parana with BAC 1-11's in 1988.

Buenos Aires Aeroparque (AEP) - Parana (PRA) service will be flown once daily in each direction with Austral's E-190's effective 01Mar14.

Entre Rios province has its own airline, LAER (Lineas Aereas Entre Rios), that once operated the FMA IA-50 Guarani II (an Argentine transport aircraft), Jetstream 32's, and even the ATR-42 and F.28-4000.  Today the airline's services are flown by Macair Jetstream 32's which fly a few routes from Parana (PRA), including to Buenos Aires Aeroparque (AEP). 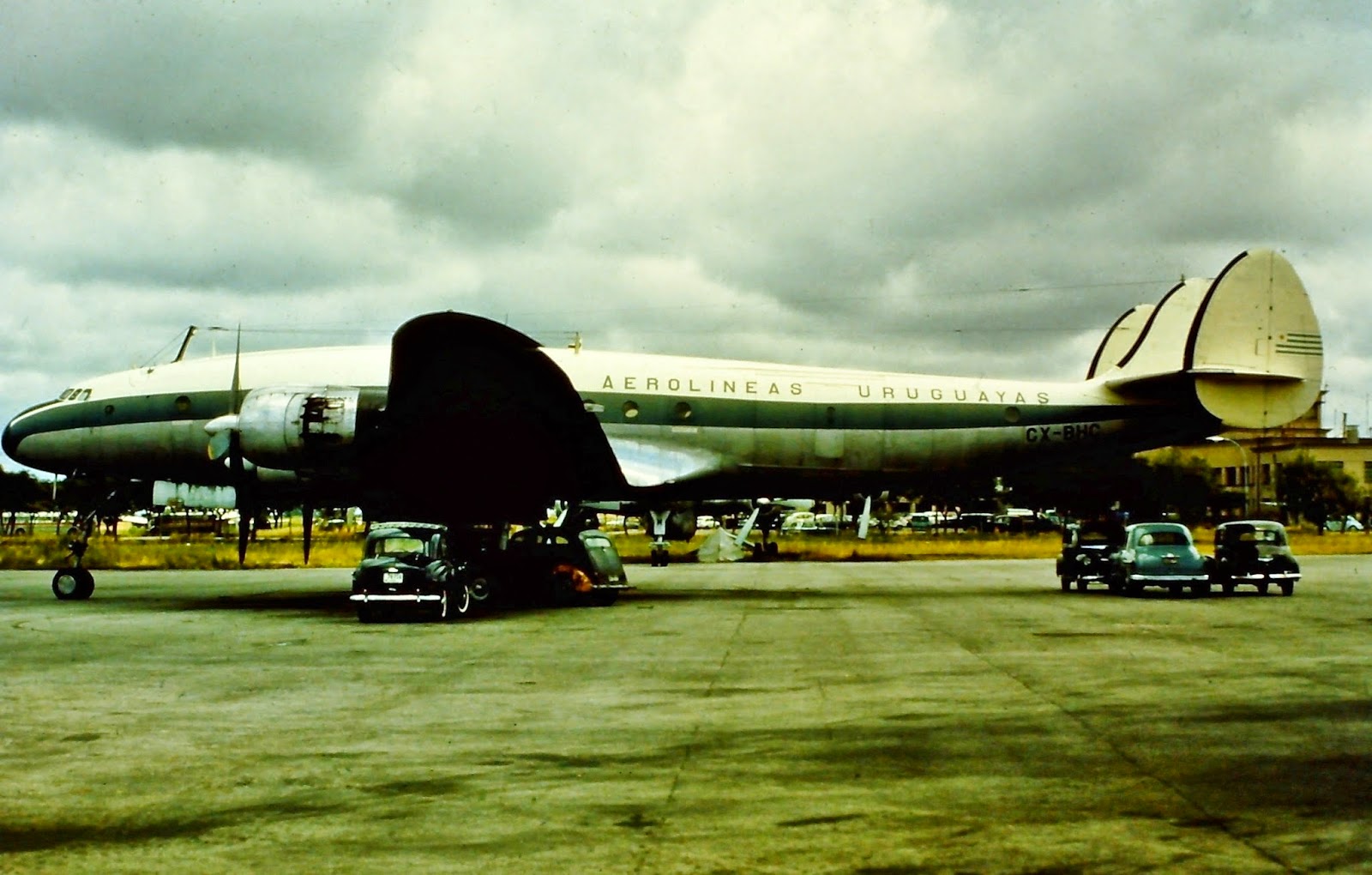 There have been at least two, and maybe three airlines named Aerolineas Uruguayas.  There was the carrier that operated the above Constellation from 1968 until 1969 when it ceased operations plus one or more other carriers that operated 707 freighters and F.27 passenger aircraft.

Lockheed L.749 Constellation CX-BHC (c/n 2565) was initially reserved for delivery to KLM Royal Dutch Airlines in 1947 but it was not taken up by the Dutch carrier instead going to QANTAS with registration VH-EAB where it flew around Australia and Asia for several years before being withdrawn from service in October 1951 for conversion to L.749A standard.  This modification entailed a strengthened fuselage and floor, redesigned engine cowling, new Curtiss Electric propellers, and the MTOW (maximum takeoff weight) increased by 4,000 pounds.  Lockheed factory-delivered 59 L.749A's and many of the 60 original L.749's were converted to "A" standard.

c/n 2565 was sold to BOAC in 1955 and it went on to also fly with British carriers Skyways and Euravia (predecessor to Britannia and today's Thomson Airways) before flying with ACE Freighters until the carrier's demise in 1966. The aircraft then joined COPISA of Peru for a short time before going on to Aerolineas Uruguayas in 1968, where it flew for one year before being parked at Montevideo (MVD) until apparently being scrapped there sometime in the 1970's.

Interestingly, c/n 2565's delivery registration of VH-EAB was later worn by a QANTAS 747SP and another Uruguayan airliner was later also registered CX-BHC, a Convair 240 flying for Aerolineas Colonia (ARCO) in the 1970's. 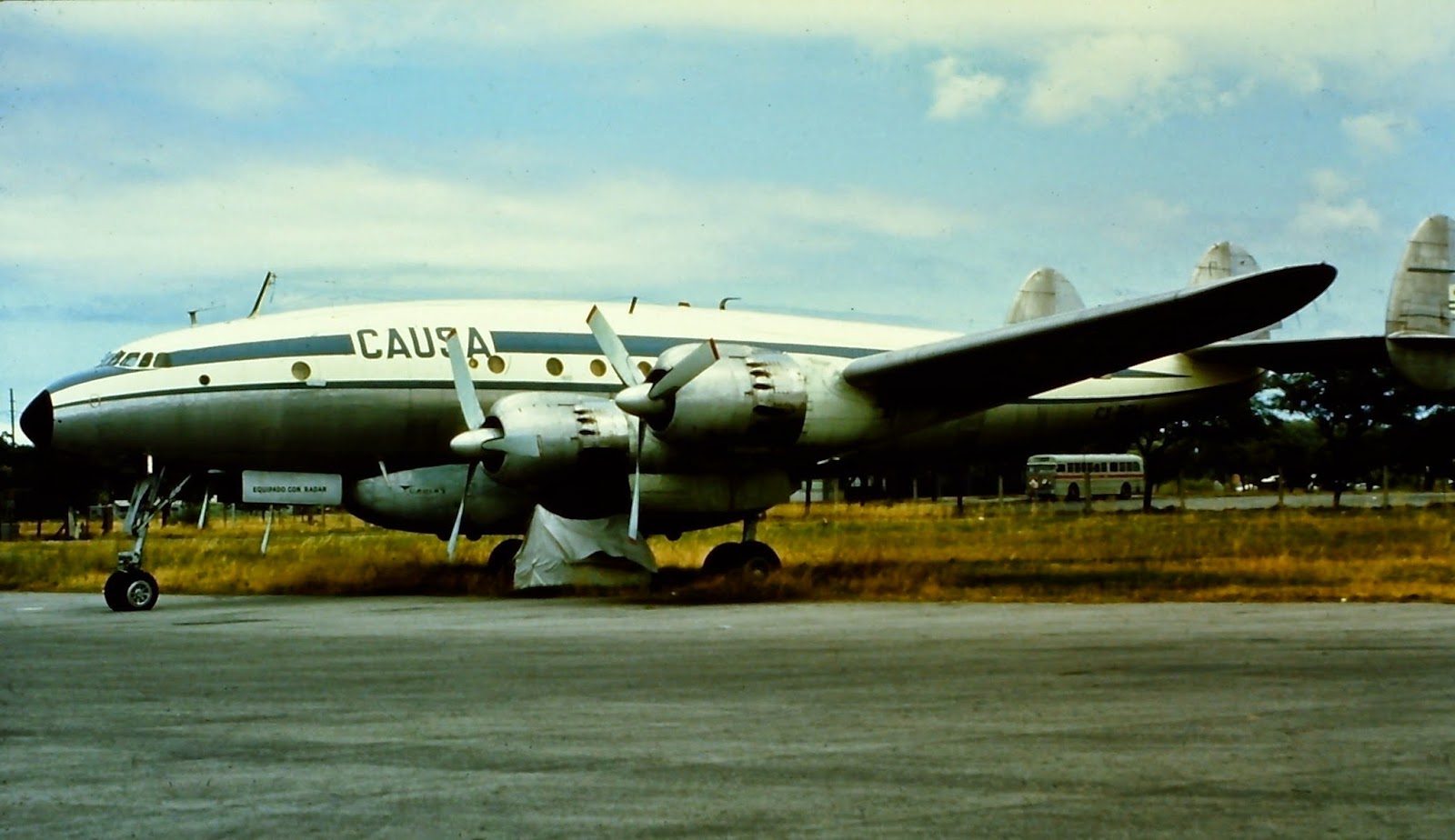 Alas-U, the airline being formed by former PLUNA workers, recently came to an agreement to purchase three of the former flag carrier's CRJ-900's that are owned by the trust formed by the Uruguayan government after the collapse of PLUNA.

The Uruguayan government guaranteed the loans given to purchase the aircraft by ScotiaBank.  It has given Alas-U a two-year grace period during which the government will continue making the payments but after that the airline will need to pay US$ 47 million over a ten-year period.

The Fondo de Desarrollo (FONDES) development fund approved the US$ 15 million loan to Alas-U that had been pending for months and will start to hand over the cash in installments shortly.  The three CRJ-900's will act as the guarantee for the loan and will be subject to being returned to the trust should Alas-U fail to make the loan payments.  An independent consultant will be contracted to maintain the government informed of developments and monitor the airline's adherence to the business plan presented to the FONDES.

The airline has started the process of getting its operating certificate from the DINACIA (national civil aviation regulatory body) which the agency has 180 days to complete.  Unless the licensing is speeded up, Alas-U will not be able to start service until March 2014 when the peak summer season for visitors to Uruguay will be finished.

This is very disappointing to the Uruguayan tourism industry as it was hoped that the airline would be up-and-running providing seats to bring in tourists and help keep airfares in check.  This will be the second summer without a substantial presence by a Uruguayan airline in the market although BQB Lineas Aereas has helped fill the gap.

Aerolineas Argentinas A340's to the Argentine Air Force or Converted to Freighters ?

With the pending delivery of A330-200's to the Aerolineas Argentinas fleet, the airline is considering removing some of it older A340's from service and transferring them to the Argentine Air Force, especially the ones that are due for major maintenance, which would then be the responsibility of the Air Force.

Another possibility would be to convert them to freighters for use on foreign routes and to Tierra del Fuego in southern Argentina, which is an important electronics manufacturing center.  However, freighter conversion is not cheap so the editor of this blog doubts that will happen.

Finally, the aircraft might end up parked in "Chivato", a section of Buenos Aires Ezeiza (EZE) where many aircraft are left abandoned for months or years awaiting scrapping.