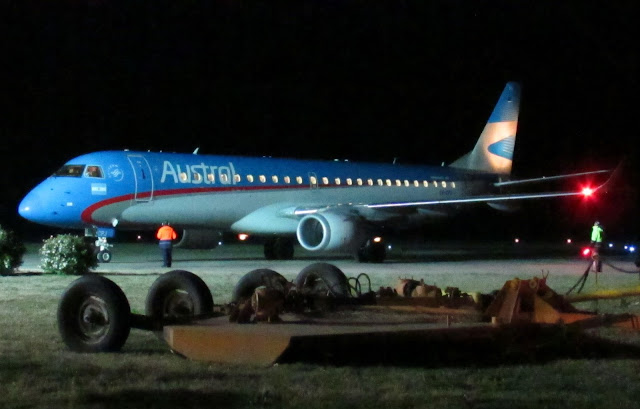 The timing of the flights is ideal for residents of Rio Cuarto with the daily departure to Buenos Aires leaving at 08:00 and returning from Buenos Aires at 20:25 hours, making possible a same-day roundtrip to the Argentine capital.

The first flight, AU2598, was scheduled to depart Aeroparque at 20:25 and arrive at Rio Cuarto (RCU) at 21:50 but the actual takeoff was at 20:41 and landing in Rio Cuarto (RCU) being at 21:43 on runway 5, the longer of the airport's two runways.  The aircraft used for the inaugural flight, LV-CPJ (c/n 463), carried nearly a full load of passengers to Rio Cuarto with 90 travelers disembarking from the 96-seat plane.  On board was the Argentine Minister of Transport Guillermo Dietrich.

After much fanfare with local media coverage and curiosity seekers, including a press conference featuring Mr. Dietrich, Province of Cordoba Governor Juan Schiaretti and Rio Cuarto Mayor Juan Manuel Llamosas, LV-CPJ loaded some passengers for the leg to Cordoba (COR) and departed the hard stand at 22:40, taking off once again on RCU's runway 5 at 22:43.

The only profitable routes operated by the Aerolineas Argentinas / Austral group are its domestic services with its regional South American and intercontinental US and European routes being money losers.

Argentine President Mauricio Macri has let it be known that he would like to see Aerolineas double its domestic service during his 4-year presidency, which started on 10Dec15, with the twin goals of having a large successful national airline and dramatically increasing air connectivity in Argentina, which has lagged behind many of its Latin American neighbors in growth of air service, especially Brazil and Mexico.