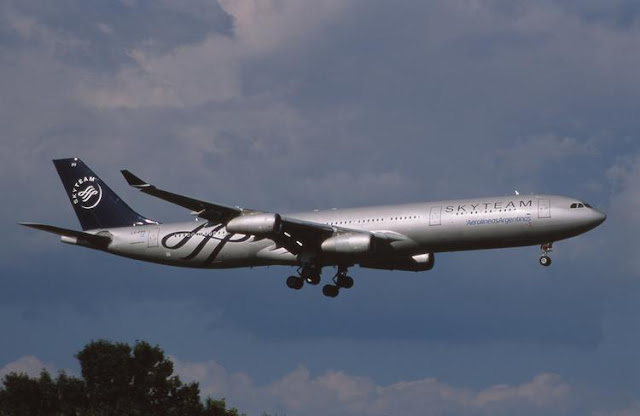 Aerolineas Argentinas A340-313X, LV-FPV (c/n 193), in Skyteam colors will be one of the last two Aerolineas A340's to be retired from the fleet. (Phil Perry Collection)

Aerolineas Argentinas officially has six A340-300's remaining in its fleet but two are reportedly parked in the desert in the United States with two more to be retired in the coming months and two more with recently renovated interiors expected to stay in service with the Argentine national airline for another year.

The carrier's A330's will cover Aerolineas' other intercontinental routes to Miami (MIA), New York-Kennedy (JFK) and Rome-Fiumicino (FCO).  Once the A340's are gone, the A330's will operate all of Aerolineas' intercontinental routes plus many routes in the Americas that are beyond the range of the carrier's 737-800 fleet, at least until Aerolineas starts taking delivery of the longer-range 737 MAX 8, which will be deployed on routes such as Buenos Aires Ezeiza (EZE) to Bogota (BOG) and Punta Cana (PUJ).