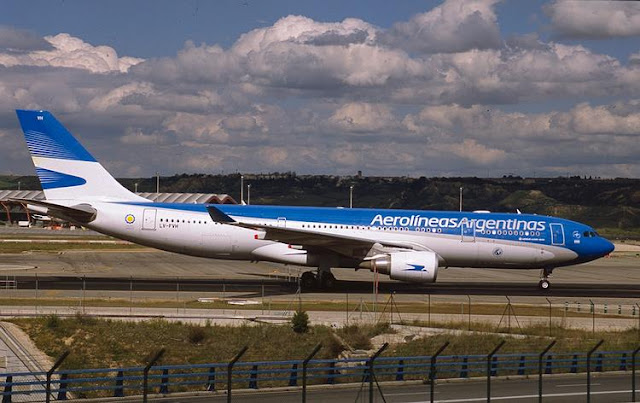 Aerolineas Argentinas will reportedly make a decision on the replacement of its intercontinental jet fleet by the end of 2018.

Aerolineas Argentinas has flown several types of long-range jet aircraft from  Argentina to Europe and North America since it first introduced the de Havilland Comet 4 into service in 1959.  Since then the Boeing 707, 747-200, 747SP, 747-400 and Airbus A310 have all flown long-range services for Aerolineas with even some smaller regional types, such as the 727-200 being pressed into service occasionally on multi-stop runs from Argentina to Miami, for example.

After the 747-400 was retired from active Aerolineas service on 01Feb12, the airline remained with an exclusive Airbus fleet for its intercontinental scheduled flights.  Aerolineas has operated a total of 13 different A340 series aircraft, including three A340-200's and ten A340-300's, two of which remain in service plus 10 A330-200's, all of which are currently flying for the carrier.

Two of these aircraft, LV-FNI (c/n 290) and LV-FNJ (c/n 300), were delivered to SABENA with both going on to also fly for VG Airlines and Malaysia Airlines before joining Aerolineas.

Another two A330-200's, LV-FNK (c/n 358) and LV-FNL (c/n 364), were delivered to Air Afrique and proceeded to serve an identical sequence of operators; Calliope, Eurofly, Atlas Jet, Saudi Arabian, and Atlas Jet again before going on to Aerolineas.

Yet another pair of A330-200's had identical service histories before joining Aerolineas, LV-GKO (c/n 587) and LV-GKP (c/n 634), which were delivered to EVA Airways prior to going to Argentina.

Aerolineas deploys its A330-200 fleet on its intercontinental network radiating out from Buenos Aires Ezeiza (EZE) to Miami (MIA), New York Kennedy (JFK), Cancun (CUN), Punta Cana (PUJ), Rome-Fiumicino (FCO), and Madrid (MAD) 2x/weekly with the other 5 days being operated by A340-300's.  The carrier  flew to Barcelona (BCN) until recently too.

Aerolineas dropped Barcelona (BCN) because it was unprofitable, especially in the face of competition from Level, an LCC belonging to the IAG Group, but it plans to restart service to the Catalan city when it has more efficient lower-cost aircraft in its fleet that will make the airline more competitive on the route.

The Rome-Fiumicino (FCO) route was also a money-loser but it apparently became a much more attractive product when Aerolineas added frequencies to make it a daily service because the route is now profitable.

Aerolineas will reportedly start retiring its A330-200's after it has completed replacing Austral's E190 fleet, probably in 2021 or soon thereafter.

The leading candidate aircraft include the 777, 787, and A350 with no further indication thus far of which models of each type might be under consideration.