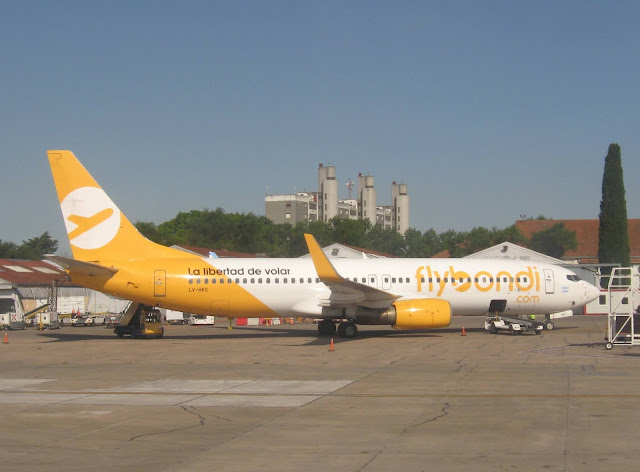 As the airline continued to grow with the addition of new routes in Argentina and eventually internationally to neighboring countries in South America, it needed more aircraft and took delivery of its fifth 737-800, LV-HFQ (c/n 33029/1945), which arrived in (Cordoba) COR on 16Jun18.
The additional seats offered by LV-HFQ helped Flybondi to expand its network adding service from El Palomar (EPA) to Posadas (PSS), Bahia Blanca (BHI) and  Salta (SLA) plus planned flights to Puerto Iguazú (IGR) and Santiago del Estero (SDE).
Even though the aircraft was relatively young, having been delivered new to a leasing company in May 2006, it operated with eight carriers prior to joining Flybondi in June 2018:
Ajet - Cyprus
XL Airways - UK
Nok Air - Thailand
Sunwing Airlines - Canada
Viking Airlines - Sweden
Thomson Airways - UJK
SmartWings - Czech Republic
TUI Airlines Netherlands
Flybondi almost takes delivery of a Sixth 737-800
737-800, EI-FJG (msn 37818/ 3384) was in service with Norwegian Air International when its owner, CIT Aerospace, an aircraft leasing company,  tentatively reached an agreement to lease the aircraft to Flybondi in September 2018, apparently for delivery in November that same year.
EI-FJG was painted in full Flybondi colors but it was never delivered to the Argentine carrier.  The Argentine registration LV-HXQ was even reserved for it (although this was never applied to the aircraft with the 737-800 retaining its Irish EI reg).
EI-FJG left Budapest (BUD) destined for Lasham, England on 27Nov18 but bad weather saw it diverted to London-Gatwick (LGW) where it stayed before continuing on to Lasham on the 30th.  Many expected that would fly on to Argentina but it remained in England, eventually moving to English carrier Jet2 on 31May19 registered as G-DRTO.
One 737-800 replaced by another
LV-HKR (c/n 32614/1201), the fourth 737-800 that Flybondi received, was returned to lessor GECAS on 17Jun19 for onward conversion to a freighter in Shanghai Pudong (PDV) for Southern Air flying on behalf of Amazon Prime Air.

LV-HKN was delivered factory-new to Air Vanuatu in 2008 with its last operator prior to joining Flybondi being Jet Airways of India.  Flybondi put it into service on 11Jul19 flying El Palomar (EPA) - Trelew (REL) - El Palomar (EPA).

The COVID-19 pandemic and the resulting quarantine in Argentina led to no regularly-scheduled flights being operated to/from or within the country for seven months between 20Mar20 and 22Oct20.

With Flybondi's 737-800's not generating any revenue, they eventually had to be returned to their lessors.

27Jan21 and 30Jan21 with all of its flights being cancelled for three days with no alternative to offer passengers.  Many ended up taking long-distance buses to their destinations.

Fortunately, LV-HKN, which had gone to Texas at the request of the lessor as a precaution, returned to Argentina on 11Feb21, giving the airline a two-aircraft fleet and a much more viable operation.