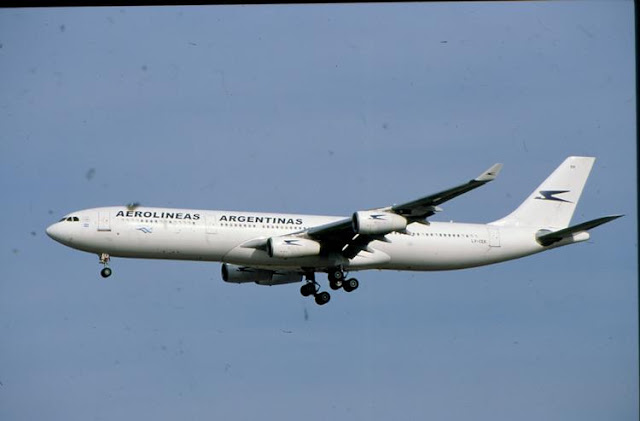 LV-CEK in the all-white scheme that it apparently wore throughout its career with Aerolineas Argentinas. (Phil Perry Collection)

Departed Buenos Aires Ezeiza (EZE) to Miami (MIA) on the evening of 05Sep16 arriving in Florida the following morning.  This aircraft was an early-build A340 having originally been delivered to Air Mauritius on 31Mar95 where it served for 15 years prior to joining Aerolineas on 17May10.

Flew its last service with the airline on 14Sep16 and was apparently stored at Buenos Aires Ezeiza (EZE) soon thereafter.  This example was delivered to Singapore Airlines on 24Apr96 and also flew for Cathay Pacific before joining Aerolineas on 08Jan12.

Both of the above A340's will be replaced by one of the many A330's that Aerolineas is due to receive in the coming years.