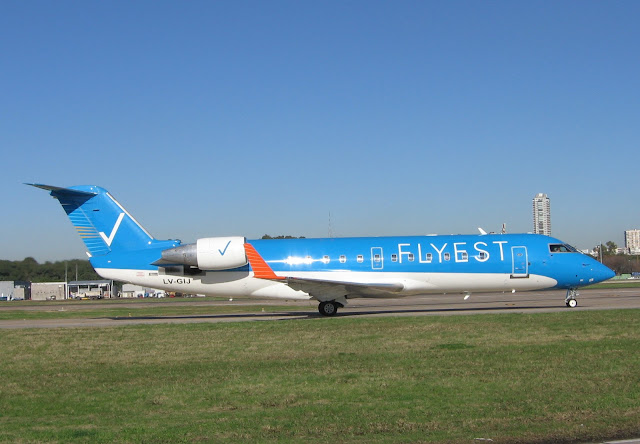 At least during the week of Monday 10Jul17, Flyest, the Argentinean airline that is the reincarnation of Sol Lineas Aereas, flew some rotations on behalf of Amaszonas Paraguay on the Buenos Aires Aeroparque (AEP) - Asuncion (ASU) route.   This appears to be an outgrowth of the relationship that the Spanish carrier Air Nostrum had with Sol and Amaszonas Paraguay, which is a joint venture between Air Nostrum and Amaszonas Linea Aerea of Bolivia.

Sol ceased operations on 16Jan16 when subsidies that it was receiving from Aerolineas Argentinas were abruptly cut off by the new administration of the national carrier put in place by the incoming government of Argentine president Mauricio Macri.  Sol had flown several Saab 340's since it started operations in August 2006 plus three CRJ-200's that it acquired under a joint venture agreement with Air Nostrum in the final months of 2015.

Two of the three CRJ-200's flew back to Spain but the third, LV-GIJ (c/n 7466), was stored in Asuncion (ASU) until 07Mar17 when it flew back to Buenos Aires Aeroparque (AEP).  The aircraft sports the basic Austral colors that it wore while flying for Sol under the Aerolineas subsidies but with Flyest titles added.  The airplane is apparently still the property of Air Nostrum .

Amaszonas Paraguay also flies CRJ-200's so it is natural for Flyest to fly subservices for the Paraguayan carrier.  It will be interesting to see where this cooperation will lead.  Maybe an Amaszonas Argentina joint venture between Air Nostrum and Amaszonas Linea Aerea using Flyest as a platform ?