The text immediately below this introduction is repeated from previous posting "ROUTE UPDATES: Argentina "Regular" Flights Restart - #1 of 4 - Aerolineas Argentinas - Buenos Aires Ezeiza (EZE) Departures - Week of 07-13Dec" to give context to the information regarding Flybondi, Jetsmart Argentina and American Jet in the second half of this posting:

Regularly scheduled airline services came to an abrupt halt in Argentina on 20Mar20 with only "special" flights operated, mostly for the repatriation of both Argentines stranded overseas and foreigners marooned in Argentina, until  22Oct20 when "regular" flights were resumed. 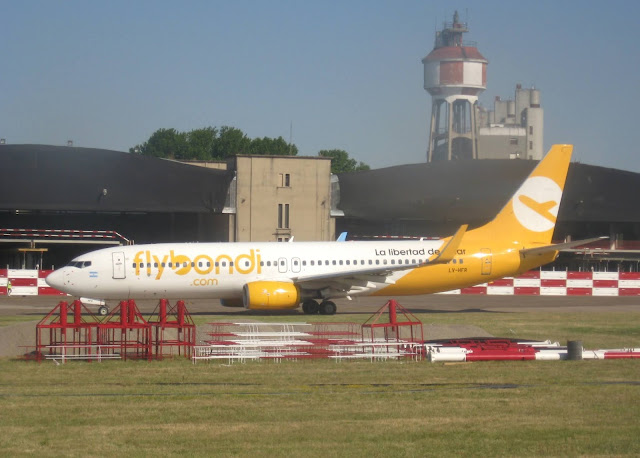 The nearly three-year old Argentine Low-Cost Carrier (LCC) was holding out to restart service out of the Buenos Aires El Palomar (EPA) airport that it shared with Jetsmart Argentina but agreed to fly from EZE when it became clear that EPA would not open anytime soon.

Flybondi's sole 737-800, LV-HFR (c/n 28017/133), returned to Argentina from maintenance in Mexico on 11Dec20, just in time to resume service on Saturday, 12Dec20 with a total of 6 flights to Bariloche (BRC), Puerto Iguazu (IGR), Posadas (PSS), Salta (SLA) and Tucuman (TUC) in its first two days of service, followed by the addition of flights to Corrientes (CNQ), Jujuy (JUJ), Santiago del Estero (SDE) and Neuquen (NQN) since then.

The carrier has also added flights directly linking points in Argentina's "interior" to each other without connecting through Buenos Aires, such as Salta (SLA) to Neuquen (NQN) and Cordoba (COR) to Bariloche (BRC).

One other Argentine carrier has been flying out of EZE occasionally recently, such as to San Rafael (AFA) and Bariloche (BRC) on 08Dec20 with its ERJ-145's, though they might have been "special" or even charter flights.