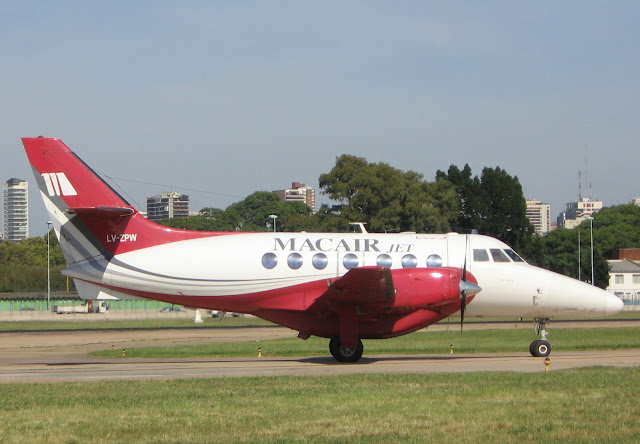 The parent company of AVIANCA Colombian airlines, also with affiliates in Brazil, Ecuador, Peru, Costa Rica and El Salvador, recently purchased Macair Jet of Argentina with the apparent intent of gaining a foothold from which to launch an Argentine affiliate.

Macair Jet is an air taxi operator which has also operated scheduled operations on a subcontract basis for Lineas Aereas Entre Rios between Buenos Aires Aeroparque (AEP) and Entre Rios province, including Concordia (COC) and Parana (PRA) with 19-seat Jetstreams, plus it even flew an MD-87 for AeroChaco on charter services.  The attraction for AVIANCA is MacAir's air operator certificate and ready ability to apply for route rights in Argentina's domestic market.  The company belongs to Franco Macri, father of Argentine president Mauricio Macri.

AVIANCA could have tried to purchase other Argentine airline operations, such as the recently dormant Sol Lineas Aereas, but this carrier has a significant amount of debt plus soured labor relations with its employees.

The idea of AVIANCA purchasing the Austral unit of the Aerolineas Argentinas group was also floated, which was supported by Austral's pilots as a way of returning the carrier to private independent ownership as it was prior to its takeover by Aerolineas in 1980, but this would have been a long and complex process that AVIANCA was not interested in pursuing.

AVIANCA reportedly intends to start service in Argentina with six ATR-72-600 aircraft, quickly building up to 18 ATR's for a domestic operation centered in Argentina's second largest city, the centrally-located Cordoba (COR).  The idea would be to start slowly, reportedly to give the state-owned airlines, Aerolineas Argentinas and Austral, a couple of years to become more competitive as they increase efficiency under the leadership designated by the new Argentine presidential administration.  Eventually AVIANCA's Argentine affiliate would upgrade to jet service.

For the carrier to acquire route rights beyond the few that Macair Jet currently has to the small markets of Goya (OYA), Reconquista (RCQ), Sunchales (NCJ), and Villa Maria (VMA), the Argentine government would need to call for an "Audiencia Publica", roughly translated as a call for proposals for new service in the country.  Some media have indicated that the airline might even aspire to operate some low-density routes for Aerolineas Argentinas that have too little traffic to justify the use of 100-seat Embraer 190's, which are the current smallest aircraft of sister carrier Austral.

AVIANCA CEO German Efromovich has indicated that the carrier would like the new Argentine division of AVIANCA to feed the other divisions' existing flights from Buenos Aires Ezeiza (EZE) to Lima (LIM) and Bogota (BOG) plus possible new services to Cordoba (COR) and Mendoza (MDZ) and by AVIANCA Brasil between Argentina and Brazil.

With AVIANCA starting service in Argentina, the country would become one of a relatively few nations with all three major world alliances with a member operating domestic service; Star Alliance (AVIANCA), oneworld (LAN Argentina), and Skyteam (Aerolineas Argentinas / Austral).
AVIANCA is rumored to have interviewed 160 recently unemployed Sol employees.