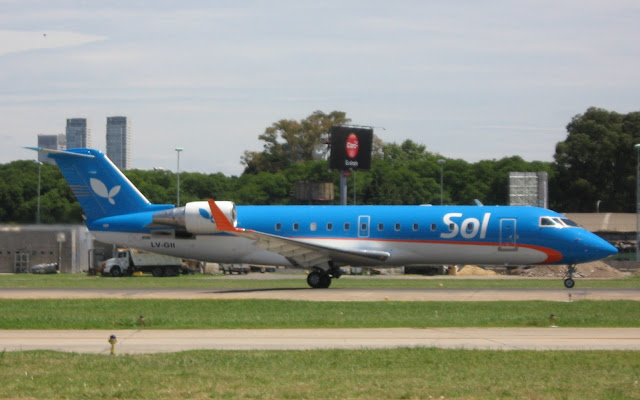 This blog's last posting on Sol Lineas Aereas was in late September 2015 when the airline was seemingly embarking on an exciting new era of expansion and jet service but, sadly, only a little over three months later, Sol, was shut down by its ownership on 15Jan16.

Three CRJ-200's delivered (of six that were planned)

Sol took delivery of its first CRJ-200ER, registered EC-IVH (c/n 7915), from Air Nostrum on 20Sep15.  Surprisingly, the aircraft was not painted in the blue and orange colors of Sol, but in a scheme almost identical to that of Aerolineas Argentinas' sister carrier Austral Lineas Aereas, with the exception of a different tail logo and Sol titles instead of Austral.  This livery reflected that Sol was to assume the role of a regional carrier covering low-density routes for Aerolineas Argentinas and Austral and feeding the two carriers' flights at Buenos Aires Aeroparque (AEP) and potentially other cities.

The resemblance was not lost on Austral's pilot's union, UALA, long a rival of Aerolineas pilots' union, that interpreted the similarity of schemes as an indication that Sol might take over much of the Argentine domestic flying done by Austral's E190's.  Strong objections and tensions between UALA and Aerolineas / Austral management ensued.

The aircraft was re-registered as LV-GIH and, after some training and route trials, it entered service on 19Oct15 on "El Corredor Petrolero" (The Oil Corridor) flying from Rosario (ROS) - Cordoba (COR) - Neuquen (NQN) - Comodoro Rivadavia (CRD) and back, so named because much of the passenger traffic going to the latter two cities is oil-related business travel.  Flight crews were said to be a mix of Argentine and Spanish nationals.

Two more CRJ-200ER's were delivered by Air Nostrum to Sol, EC-JCL (c/n 7975), which was re-registered as LV-GII, in late October and EC-HSH (c/n 7466), later becoming LV-GIJ, in December.  Both aircraft were also painted in the Austral-style scheme.

In addition to "The Oil Corridor", Sol planned to fly at least the following routes (and apparently started some prior to shutdown):

In addition to the agreement with Aerolineas, a key factor in Sol's new undertaking was the participation of the Spanish regional carrier, Air Nostrum, which was granted a 45% (some say 49%) share of Sol in exchange for the six CRJ-200's that the carrier was due to give Sol, plus corresponding training, maintenance and spares support.

Air Nostrum was establishing a new business unit, Air Nostrum Technics Americas, based in Paraguay to provide maintenance and spares support to operators of Bombardier, ATR, and CASA aircraft in Argentina, Bolivia and Paraguay.  Amaszonas of Bolivia and Amaszonas Paraguay are customers and Sol was to be one too.  In addition, the existence of this new business venture created an outlet for Air Nostrum to dispose of its CRJ-200 fleet, which was redundant to its needs.