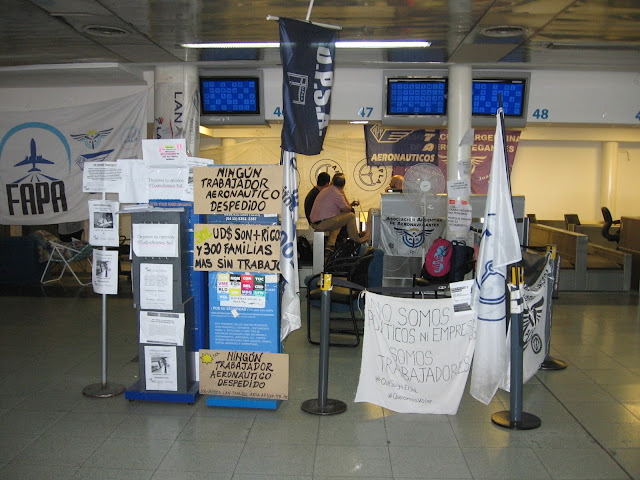 Sol employees protest at the airline's former ticket counter at Buenos Aires Aeroparque (AEP) on 17Mar16.  The signs say "No aviation worker fired" and "You are are richer (referring to the airline's owners) and 300 more families are without work". (Phil Perry Photo)

With the election of new Argentine President Mauricio Macri, who took office on 10Dec15, Aerolineas' senior management was changed so that the state-owned carrier would be run in line with President Macri's wishes.  Isela Costantini, a high-ranking executive at Mercedes Benz Argentina, took over the reins at Aerolineas on Monday, 04Jan16 and upon examining the finances and operations of the loss-plagued carrier, promptly cancelled the agreement with Sol on 14Jan16, which she judged to be extremely disadvantageous to Aerolineas.

What were the terms of the Aerolineas / Sol agreement ?  The information published in news media has been spotty and piecemeal making it difficult to determine with certainty what the terms were.  Below is the editor's interpretation from several different sources.

Aerolineas entered into a "Capacity Purchase Agreement" with Sol, similar to such arrangements between major carriers and regionals / commuters in the US and Europe, whereby the major purchases the entire seat inventory of the smaller carrier and sells it through the larger carrier's formidable marketing apparatus, keeping the revenue for itself.

One version of the agreement is that Aerolineas reportedly agreed to cover all of Sol's company costs, including flying operations, administrative costs, etc. + 12% in guaranteed profit, with the latter expected to be approximately US$ 5.50 million per year.

Some said that Aerolineas was paying Sol 80% more for flying these routes than if it had just operated the routes itself with sister carrier Austral's E190's.  It appears that this might be the case in the first version above where all of Sol's costs were covered by Aerolineas but in the second version it seems the opposite would be true because Austral's E190's would probably cost a lot more to operate than Sol's 34-seat Saab 340's and 50-seat CRJ-200's.

With the cancellation of the Aerolineas agreement, Air Nostrum cancelled its partnership with Sol leading the latter's management to declare the carrier's continuing operations to be unviable and suspend operations on 15Jan16.

The sudden shutdown of Sol caused a lot of commotion for passengers who found themselves with cancelled flights, but mostly affected Sol's 220 employees who suddenly lost their jobs.

The Argentine government worked with Sol and other parties to get the airline operating again both to avoid the loss of connectivity and preserve jobs.

Initially three companies; the Via Bariloche bus operator and owner of small commuter airline SAPSA, London Supply, operator of El Calafate (FTE) and Ushuaia (USH) airports, and American Jet (an FBO and charter company with a fleet of business jets and an ATR-42 flying for the oil industry in Neuquen), all looked at making investments in Sol but did not get very far in the process before dropping out.

This was followed by the promising interest shown by Amaszonas of Bolivia, which was and is expanding in the region with affiliates Amaszonas Paraguay and now Amaszonas Uruguay, and also operates the same CRJ-200 type of aircraft that Sol flew.  Expanding into Argentina with both domestic flights and international connectivity to its other affiliates seemed like a natural fit for the airline's expansion plans.  However, when the Avianca Group of Colombia bought Macair as a base for establishing a domestic operation in Argentina, Amaszonas dropped out of pursuing Sol, saying that it could not compete with a large and powerful company like Avianca, although some thought that it was a convenient excuse for Amaszonas to back out.

With no agreement with any other carriers or investors in sight, Sol Lineas Aereas shut down completely on 31Mar16 after nearly 10 years of flight operations.