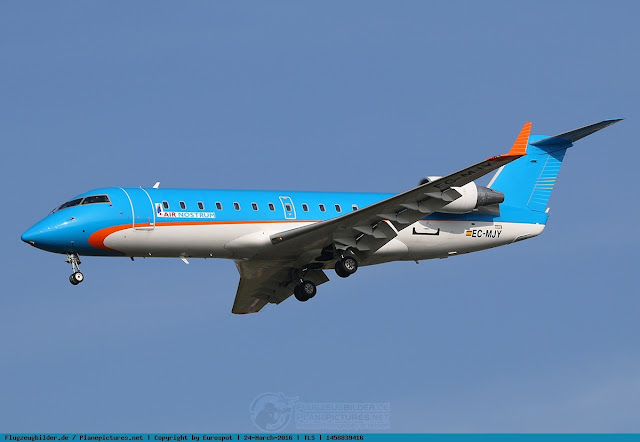 Two of Sol's CRJ-200's were reportedly parked at Rosario (ROS) soon after the carrier ceased operations with the third going to Asuncion (ASU).  By 24Feb16, all three were spotted in Asuncion (ASU) with apparently two, (c/n 7915) and (c/n 7975) departing back to Air Nostrum in Spain in March.

In the meantime, the third CRJ-200, LV-GIJ (c/n 7466), which was supposed to be re-registered as EC-MJX, presumably returned to Spain although the author of this blog knows of no confirmed reports of this.

Interesting photos of two the CRJ-200's in Sol's blue colors but with small Air Nostrum titles and with their new Spanish registrations:

Sol's five Saab 340's are reportedly parked in Rosario (ROS), the airline's former base. They are in, order of when they joined the Sol fleet:

* Saab 340A, LV-BMD (c/n 123), was originally delivered in 1988, flying for several airlines, all in the USA, prior to joining the Sol fleet on 01Oct07.  On 02Jan13, the pilots lost directional control of the aircraft while taxiing for takeoff at Mendoza (MDZ) exiting the taxiway onto rough ground.  Propeller blades from the #1 engine were damaged with shrapnel causing a 5 centimeter hole in the fuselage.  Nobody was hurt but the aircraft was deemed to be beyond economical repair.