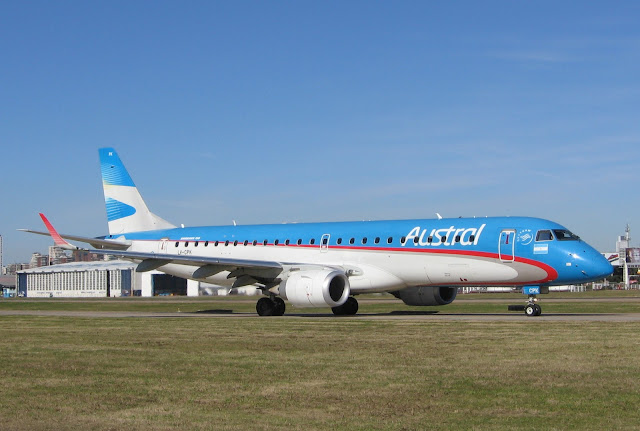 After many rumors circulating during the past few months, Aerolineas Argentinas officials have indicated that the carrier is considering reducing or replacing the fleet of 26-strong E190's operated by its Austral Lineas Aereas division with another aircraft type, most likely the 737-800, which is already operated by Aerolineas, or the 737-MAX 8, which Aerolineas will start taking delivery of before year's end.

Some of the reasons given for this possible move:

Austral's E190's are equipped with 96 seats while Aerolineas Argentinas 737-800's have 170 seats, 77% more capacity but reportedly only cost 20% more to operate.  As the airline grows, the average number of passengers per flight is also expected to grow, which the 737-800's would be better equipped to accommodate than the E190's, enhancing profitability for the airline.

The E190's cargo hold capacity is reportedly relatively small, so much so that there have reportedly been times when it has not been able to accommodate passenger luggage, with many pieces being forwarded to their destination on later flights. It is not clear to the editor of this blog if the cargo volume was not large enough in these cases or if the aircraft would have gone over its maximum takeoff weight (MTOW) due to a full payload and fuel load.

Standardizing its short to medium range routes around the 737 series would save the airline on training, crew type rating, spares, and maintenance costs.

Some of the first E190's delivered to Austral starting in 2010 are nearing the 17,000 hour mark and will require mandatory maintenance work including engine overhauls and the replacement of major landing gear components due to reaching their maximum number of cycles, which will add up to a considerable expense.

The new airlines that are expected to start operations in Argentina during the next year are generally expected to fly larger aircraft, especially the Low-Cost Carriers (LCC) Flybondi and Norwegian Air Argentina, both of which plan to fly 170+ seat 737-800's and/or 737 MAX 8's, with the economies of scale that they offer and which the E190 cannot match (on higher density routes anyway).

Even one existing carrier, Andes Lineas Aereas, which flies the 150-seat MD-80, has already started the process of converting to a more efficient 737-800 fleet having taken delivery of two examples in recent months.

* Aerolineas Argentinas' Management is analyzing its Route Network needs for a Comprehensive Fleet-Mix Solution that will best accommodate its overall requirements, not just route-specific needs

The E190 is a good aircraft for "thin" routes with low demand but the 737-800 and 737 MAX 8 with its extra long range will better accommodate the current Argentine government administration's goal of doubling domestic air traffic in the next 2-3 years.  Both of these aircraft will also fly more efficiently on some longer route sectors currently flown by Austral E190's, such as Buenos Aires Aeroparque (AEP) to Rio de Janeiro Galeao (GIG) and Buenos Aires Ezeiza (EZE) to Sao Paulo Guarulhos (GRU).  The 737 MAX 8 will also make possible nonstop flights with a medium-sized aircraft on long routes that currently require widebodies for nonstop operations, such as Cordoba (COR) to Punta Cana (PUJ).

The decision on the future of Austral's E190's is expected to be taken no later than the first quarter of 2018.