Five proposed or existing carriers participated in the route hearings held on 27Dec16, the first in Argentina in over ten years; Alas del Sur, American Jet, Andes Lineas Aereas, Avianca Argentina, and Flybondi.  Here is an update on the status of the service plans of these five airlines: 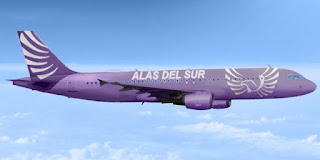 Not too many details ever surfaced regarding this carrier that was proposed to start with Argentine and Chinese investors flying domestically in Argentina but also with ambitious international routes, such as Cordoba (COR) - Buenos Aires Ezeiza (EZE) - Los Angeles (LAX) - Shanghai Pudong (PVG).  As of this writing, this carrier appears to be on hold.

This company is over 30 years old with its headquarters at San Fernando (FDO) north of Buenos Aires, known as Argentina's primary "biz jet" airport, but with its main operational bases in Mendoza (MDZ) and Neuquen (NQN) serving the oil industry with charter and support aircraft and helicopters, including one ATR-42, several Fairchild Metros and one Dornier 228.

The carrier was approved for several routes emanating from Neuquen (NQN) to other parts of Argentina and even extending into Brazil, Paraguay and Uruguay but not many specific plans have emerged with the only information coming from the Sir Chandler blog that American Jet has scaled back its plans to only fly the following routes with a single CRJ-200:

Andes is the only carrier to add new service so far as a result of the 27Dec16 route hearings.

The airline, which at the beginning of 2017 was operating four MD-83's, has since added a fifth to its fleet plus the first two of several 737-800's that are eventually planned to replace all of its MD-80's.

The Salta (SLA) based carrier had a modest scheduled route network that consisted of only four cities prior to 2017; Buenos Aires Aeroparque (AEP), Jujuy (JUJ), Puerto Madryn (PMY) and Salta (SLA) but has since expanded at a brisk rate adding seven more; Bariloche (BRC), Cordoba (COR), Iguazu (IGR), Mar del Plata (MDQ) (seasonal), Mendoza (MDZ), Rio Hondo (RHD) (to be replaced by Tucuman (TUC) when it reopens) and Samana (AZS) in the Dominican Republic.

In addition to its scheduled business, Andes has an extensive operation flying student and sports team charters.

This affiliate of the well-known Colombian airline plans to fly to smaller cities using ATR-72-600 aircraft with many of its proposed routes connecting Buenos Aires Aeroparque (AEP) with two smaller cities flying a "triangle" pattern.

Avianca Argentina has already taken delivery of two ATR-72-600's with a third and fourth expected soon.  The carrier has flown sub-services for Andes Lineas Aereas, which experienced a capacity shortage in July, plus several charters to Malargue, serving the ski resort of Las Lenas, and the occasional ad hoc charter too.

The founders of this carrier have strong airline credentials having worked extensively in the industry in Europe, with solid experience in the Low-Cost Carrier (LCC) sector too.

Julian Cook, ex-CEO of Swiss carrier FlyBaboo; Michael Cawley, ex-COO of Ryanair; and Michael Powell, ex-CFO of WizzAir have put together a business plan based primarily on flying out of alternative airport El Palomar (EPA) located fifteen miles west of the city of Buenos Aires to several domestic points and some regional international South American destinations too.

Flybondi reportedly recently closed an important funding round of US$ 75 million with investments from Cartesian Capital Group and Yamasa Limited.

It plans to build its own facilities at El Palomar (EPA), including a terminal with a typically simple LCC design featuring no jetways plus a new ramp and taxiways, with the entire project budgeted at US$ 30 million.

Joining Aerolineas Argentinas, Avianca Argentina, and Norwegian Air Argentina in establishing hubs in Cordoba (COR), the four carriers would collectively grow service out of the central Argentina airport several times over if all of their plans come to fruition.