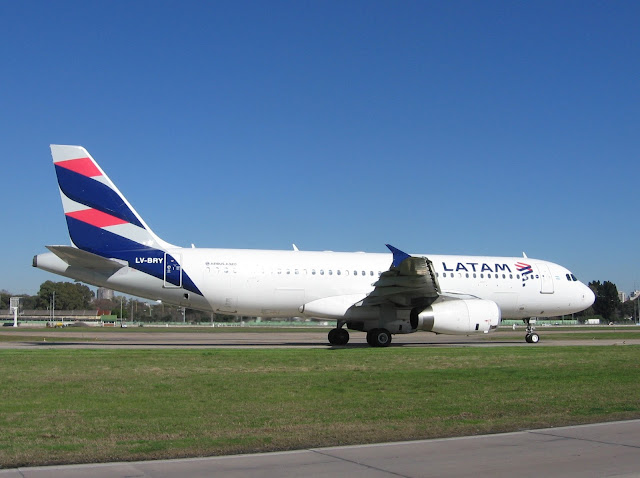 LATAM Argentina A320, LV-BRY (c/n 1351), the first aircraft of the carrier to be painted in LATAM colors, taxis out for departure at Buenos Aires Aeroparque (AEP) on 06Aug16.  This plane and the rest of LATAM Argentina's A320 fleet will soon be returned to lessors in the wake of the airline's permanent closure.  (Phil Perry Photo)

LATAM Argentina ceased operations on 17Jun20 and was recently officially closed as a company.

The airline's A320 fleet has been inactive since the Argentine government established a "quarantine" (since lifted) in response to the COVID-19 pandemic on 20Mar20 with some of the aircraft remaining on the ground since then with others returning to Santiago, Chile, home of the parent LATAM company.

The Argentine aviation blog Linea ALA recently published details of the whereabouts of LATAM Argentina's former A320 fleet.  The carrier also operated several 767-300's with at least a couple of them converted to freighters.

The disposition of the thirteen A320's in LATAM Argentina's fleet at the time it ceased operations last June:

* LV-GLP (c/n 1355) - This plane has apparently been in long-term storage in Santiago (SCL) since last June.

* LV-BOI (c/n 1491) - This aircraft is presently in long-term storage at Santiago (SCL) with its engines and other inlets covered.

* LV-HQI (c/n 3319) - This aircraft is presently in long-term storage at Santiago (SCL) with its engines and other inlets covered.

* LV-FUX (c/n 4543) - This aircraft is presently in long-term storage at Santiago (SCL) with its engines and other inlets covered.

* LV-BRA (c/n 1304) - This aircraft was one of three LATAM Argentina A320's to be painted in full LATAM colors back in 2016 and, to the best of the blog editor's knowledge, were the only aircraft of the carrier to receive the new livery.  LV-BRA is currently in Santiago (SCL), apparently having recently arrived there from Argentina.

* LV-BSJ (c/n 1332) - This plane is one of the three A320's to be painted in the airline's new colors.  It is currently in Santiago (SCL) having also apparently recently arrived there from Argentina.

The following six aircraft were at Buenos Aires Aeroparque (AEP) at the time the airport closed to have its runway rebuilt and extended last year.  With Aeroparque due to become operational once again on 15Mar21, they are expected to be flown to Santiago (SCL) where they will join their sister aircraft.

* LV-BRY (c/n 1351) - This was the very first LATAM Argentina A320 to be painted in new colors.  It is currently undergoing heavy maintenance at the Fabrica Argentina de Aviones (FAdeA) in Cordoba (at another airfield, not the airport with airline service).