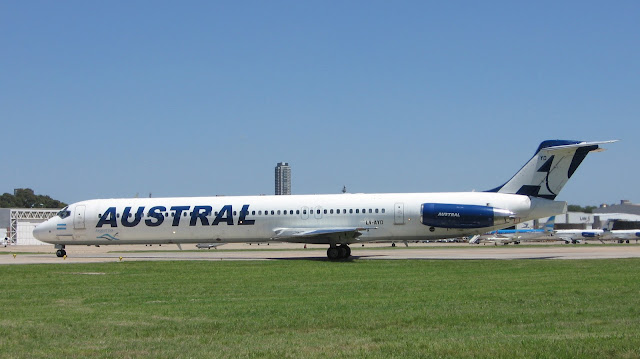 MD-83 LV-AYD prepares to take off from AEP's runway 31 on 11Feb12, about two months before it operated Austral's last MD-80 service. 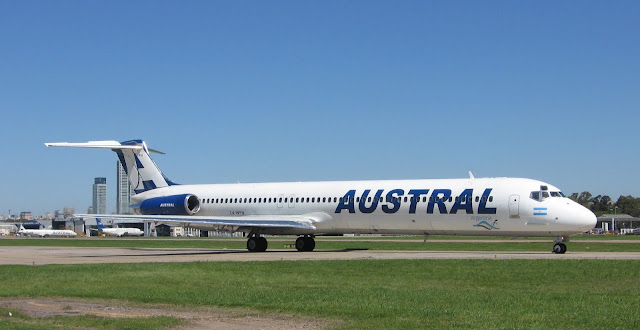 In late 1978, Austral received authorization from the Argentine Aviation Secretariat to acquire five MD-80 aircraft.  The first two planes, N10022 (msn 48024/948) and N10027 (msn 48025/952), departed the McDonnell Douglas factory in Long Beach, California, USA arriving at Austral's Buenos Aires Aeroparque base on 10Jan81.  The first service was operated by N10027 on 11Jan81 with the two aircraft initially flying routes from Buenos Aires to Neuquen (NQN), the resorts of Bariloche (BRC) and Mar del Plata (MDQ), plus the important cities of Córdoba (COR) and Mendoza (MDZ).  The third aircraft, N1003G (msn 48050/989), was delivered on 08Aug81.  The fourth and fifth planes, N10028 and N10029, were painted in Austral's full colors and were ready for delivery but that part of the order was cancelled.

N10027 went on to be reregistered as LV-WFN in December 1993, flying its entire 31-year career for Austral until it operated its last flight on 02Feb12 to Bariloche (BRC).  The aircraft flew 70,444 hours and 60,350 cycles in its career.  On 17Mar12 the plane was ferried from Buenos Aires Aeroparque (AEP) to Cordoba (COR) for temporary storage until the airline decides what to do with it.  Given its prominent history, there is much talk of LV-WFN joining an ex-Aerolineas Argentinas 737-200 at the Argentine National Aviation Museum at the Moron Air Force Base near Buenos Aires.

N10022 was reregistered LV-WPY.  On 20Feb04 it lost a main landing gear wheel upon takeoff from AEP and a small fire erupted in the landing gear upon making an emergency landing at Buenos Aires Ezeiza (EZE) but it was quickly put out by fire crews.  The aircraft was withdrawn from use on 16Jan07 and scrapped in April 2008.

N1003G sadly went on to crash on 12Jun88 when it hit eucalyptus trees on approach in fog to Posadas Airport in the northern Argentine province of Misiones.  All 22 passengers and crew on board perished.

Other notable aircraft in the Austral fleet with their retirement dates: 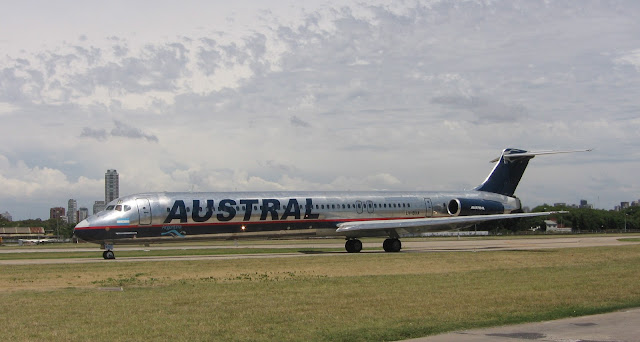 MD-88 LV-BXA was delivered to Austral on 19Mar09, entered service on 26Mar09 and operated its last revenue flight on 22Sep11.  It was returned to the lessor on 16Dec11, flying from AEP to Lima (LIM), San Jose, Costa Rica (SJO), Miami (MIA) enroute to Victorville, California.  The aircraft was reregistered as N372MS but this registration was cancelled on 16May12 suggesting that the aircraft will soon be scrapped. 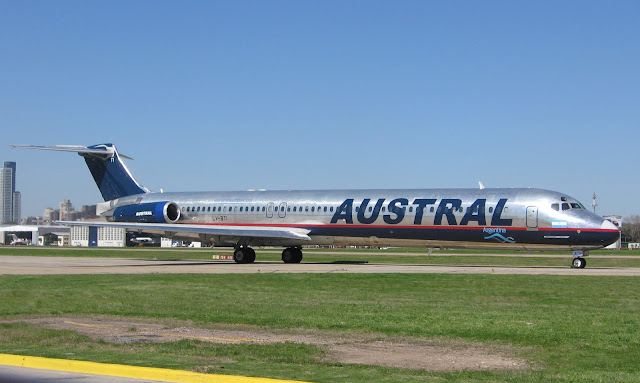 MD-88 LV-BTI was returned to the lessor on 01Oct11, flying to Goodyear, Arizona, USA.  It was reregistered as N379MS and might fly for another carrier.

MD-88 LV-BTW was returned to the lessor on 02Sep11, reregistered N382MS and scrapped. 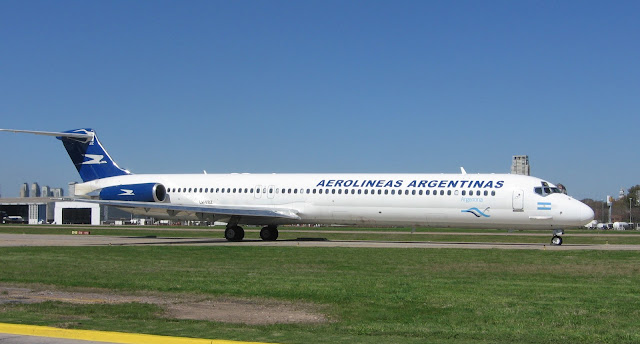 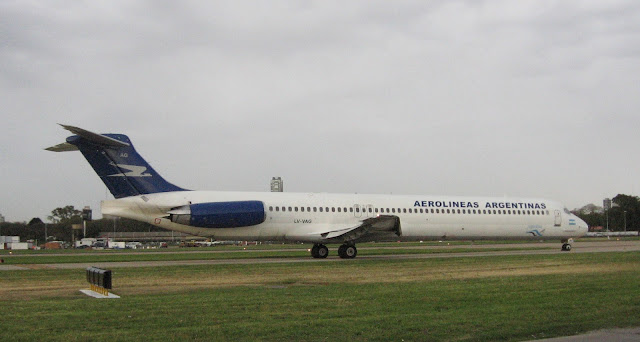 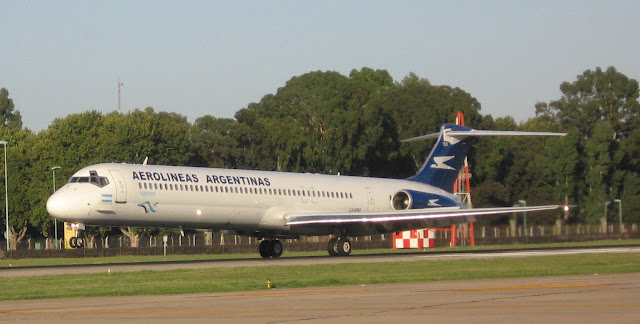 Austral flew the MD-80 almost entirely on domestic Argentine service with some charters to / from neighboring countries as well.

Austral operated 37 MD-80 series aircraft in all with Aerolineas Argentinas operating 11 MD-80s but some of these aircraft might have flown with both airlines.

The aircraft type served the Argentine market well but has now been replaced at Austral by the smaller, yet more efficient, Embraer 190 series.