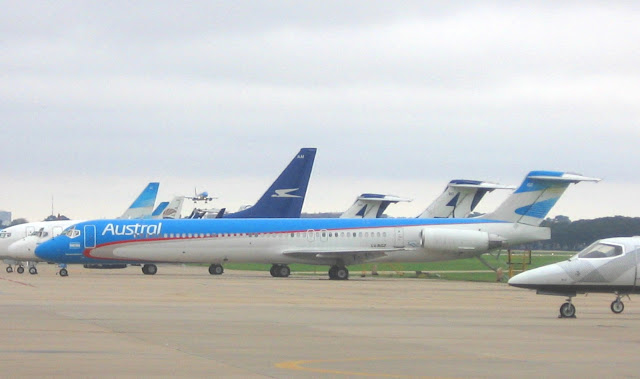 LV-BGZ at Buenos Aires Aeroparque (AEP) on a foggy day, 26May12

LV-BGZ was rolled out of the hangar at Aeroparque after a five-month long "C" check and repaint in Austral's new colors on 01Mar12.  Soon after the aircraft went into the hangar in October, it was decided that the MD-80's would be retired from service by April 2012 but work on the plane and repaint continued anyway.  The aircraft apparently flew at least a couple of revenue flights before Austral retired the type from its fleet on 10Apr12, such as AU2881 from Ushuaia (USH) to Rio Gallegos (RGL) on 20Mar12, presumably continuing on to AEP.

LV-BGZ (msn 49906/1786) was originally delivered to Finnair on 15Nov90 as an MD-82 with registration OH-LMX.  The aircraft went on to serve with Austrian Airlines and Air Plus Comet before being delivered to Austral on 10Dec06 at which time it was converted into an MD-83.

For several better-quality photos, check the following links scrolling down the pages for the photos: