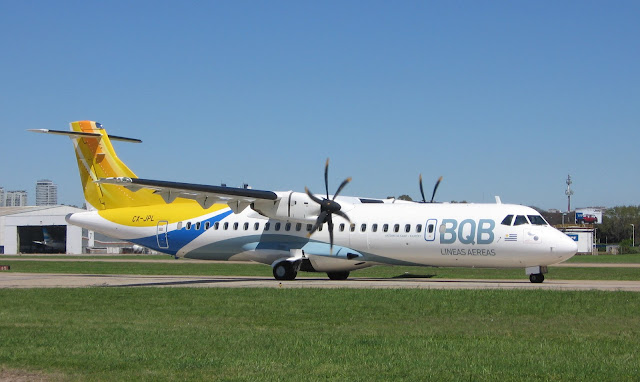 Aviacion News reports that BQB Lineas Aereas of Uruguay reported US$ 150,000 profits on US$ 12 million in sales in its fiscal year which closed at the end of March 2012.  The carrier, which flies two ATR-72-200's on regional routes, especially between the Uruguayan resort of Punta del Este and Argentina, is looking to add another ATR-72 or ATR-42 to the fleet.

Additionally, the airline confirms that it has talked with several European carriers, including Air Berlin and Virgin Atlantic, about starting joint flights to Europe.  One proposal is to fly from Montevideo (MVD) to Madrid (MAD) three-times per week in cooperation with Air Europa, which already flies from the Rio de la Plata region to Spain, with flights from Buenos Aires Ezeiza (EZE) to Madrid (MAD) with A330-200's.  There would apparently be special emphasis on carrying cargo.

Los Cipreses S.A, which owns BQB Lineas Aereas and the very successful Buquebus ferry company between Argentina and Uruguay, was approved by the Uruguayan aviation authorities in September 2010 for flights carrying passengers, cargo and mail to Madrid.