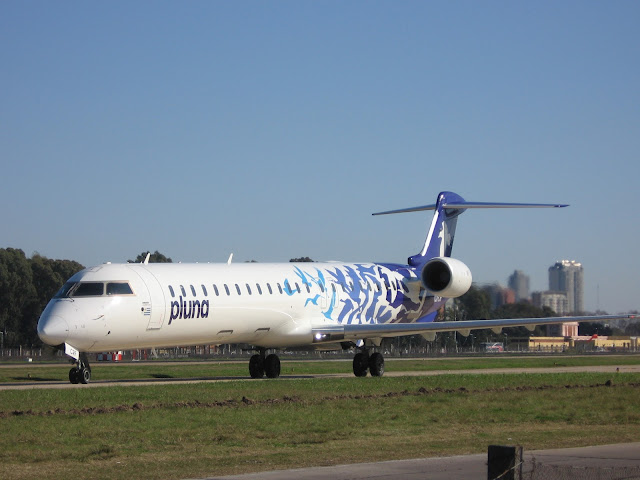 PLUNA (Primeras Lineas Uruguayas de Navegacion Aerea) has been losing money on its route network for a variety of reasons that have been aggravated lately by changing international circumstances.

The carrier flies a route network based at its Montevideo, Uruguay (MVD) hub to 13 destinations; 1 in Chile, 1 in Paraguay, 2 in Argentina and 9 in Brazil.  Additionally, PLUNA flies from Buenos Aires Aeroparque (AEP) to Punta del Este, Uruguay (PDP) and the airline recently introduced service domestically within Chile from Santiago (SCL) to Concepcion (CCP), taking advantage of Chile's "open skies" policies.

Much of PLUNA's passenger traffic is connecting through its MVD hub with its most important origin-and-destination route being Montevideo (MVD) to Buenos Aires Aeroparque (AEP).

The airline recently had its best summer ever carrying passengers from AEP to Punta del Este, the Uruguayan high-end beach resort.  This is a short route across the Rio de la Plata separating Argentina from Uruguay but PLUNA can charge relatively high fares on this route due to the premium nature of the leisure traffic traveling on this segment.

However, the airline has been suffering financial losses recently due to:

* Increasing fuel prices
* The slowing of the Brazilian economy from a 7.5% growth rate in 2010 to
2.7% in 2011.
* Recent Argentine government policies that have made it difficult for Argentines
to acquire US dollars or other hard currency making international travel
difficult.  This has caused a recent sharp drop in the number of Argentines
traveling out of the country, impacting perhaps PLUNA's most important source
of passenger traffic.

PLUNA joins several other carriers that have felt the effects of rising fuel prices and slowing South American economies including LAN and TAM, which saw profits drop 22% in the first quarter of 2012 and GOL Lineas Aereas of Brazil, which recently laid off 1,200 workers to cut costs.

Complicating matters for PLUNA, its main competitors are much larger airlines with greater resources, such as LAN and TAM, plus the heavily-subsidized Argentine national airline, Aerolineas Argentinas.   Also, PLUNA would have liked to develop Argentine markets the same way that it has done in Brazil where it flies to nine different airports, but so far the Argentine government has only authorized PLUNA to serve three airports, Buenos Aires Aeroparque (AEP), where it has flown for decades, plus Buenos Aires Ezeiza (EZE) and Cordoba (COR).

The Uruguayan government has offered to assist the airline with a US$ 30 million bailout but private investors want to see credible plans for overcoming the airline's current challenges before commiting any funds (PLUNA is 25% owned by the Uruguayan government with 75% in the hands of private investment group Leadgate of which a portion belongs to Canadian commuter airline Jazz).

LATE BREAKING NEWS:  El Observador Uruguayan newspaper reported on Tuesday, 12Jun12 that the Uruguayan government and Leadgate/Jazz have come to an agreement that the private investors will abandon their ownership stake in PLUNA.   More news is likely to follow in the coming days.