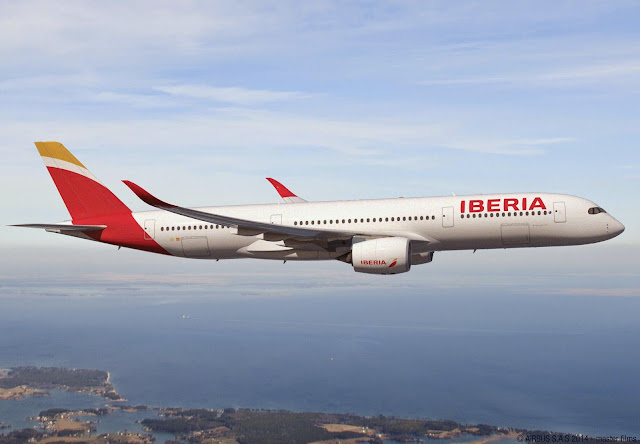 Iberia recently clarified that it loaded the A350-900 in its reservation system as operating between Madrid (MAD) and Buenos Aires Ezeiza (EZE) starting in March 2019 only as a test and it did not signal an actual change of aircraft for one of its two daily flights between the two cities from the A340-600 to the A350-900.  The airline plans to continue operating two daily A340-600 flights between the Spanish and Argentine capitals.

Iberia will take delivery of the first of 16 Airbus A350-900's that it has on order in June of this year.  After placing the aircraft into initial service on some European routes to familiarize flight crews and other staff with the type, Iberia  will start flying the A350 on its first regular route, Madrid (MAD) - London-Heathrow (LHR) in July, followed by its first long-haul service, Madrid (MAD) - New York Kennedy (JFK), in August.

The A350-900's second long-haul international route will be Madrid (MAD) - Buenos Aires Ezeiza (EZE) starting on 08Mar19 when it will replace one of two daily A340-600's currently flying this sector.

Interestingly, Iberia will be the first airline to take delivery of the upgraded version of the A350-900 with aerodynamic improvements resulting in a 1% increase in fuel efficiency and a 100 nautical mile increase in range to 8,200nm for Iberia's 280 ton version. These modifications include:

2) Larger "sharklets" made possible by greater wing strength discovered during static load testing.  The larger "sharklets" and modified twist of the wing together will lower the aircraft's induced drag.

3) Structural improvements lowering the operational empty weight of the aircraft.