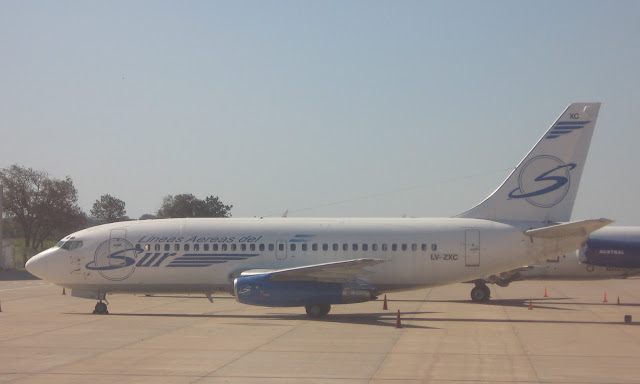 Lineas Aereas del Sur, a small charter airline based in Cordoba, Argentina and operator of one  737-200 registration LV-ZXC, has asked the Argentine Civil Aviation Administration (ANAC by its Spanish initials) to suspend its operating certificate for a period of six months, effective June 1.

The airline, started up in March 2005, is owned by Buenos Aires businessmen Carlos Cedrato and Alfredo Montalván who have interests in various transportation companies.  The airline had 17 employees but recently laid off all but four of them, including two pilots.  Its most recent flight was on March 14 between Buenos Aires Ezeiza (EZE) and Calafate (FTE) carrying a group of Spanish tourists.

LV-ZXC is currently due for a "C" check and is parked in Mendoza.  It was delivered to British Airways in 1984 and has also flown with Aerolineas Argentinas and its short-lived Chilean affiliate, Aerolineas del Sur.